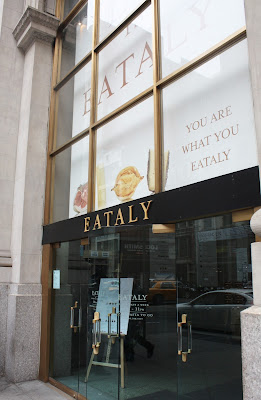 This past weekend, we accompanied friends on their first trip to New York City.  We were only there for less than 36 hours (my NYC limit, I think...), but explored so many different neighborhoods and ate about a weeks worth of food.  I requested to make a stop at Eataly, Mario Batali's rendition of an international Italian food and wine marketplace.  I had read a few things here and there about the concept- restaurants interspersed with various markets- but wanted to check it out for myself.

We were all a little overwhelmed by what we discovered.  The space is enormous- A picked up a map at the front entrance, and it's necessary.  Different sections- from produce to fish to wine to vinegars to cheese- occupy distinct areas, and many of these sections also have tables and chairs with accompanying wait-staff that serve as a mini-restaurant.  Each restaurant's menu primarily focuses on that section's offerings. 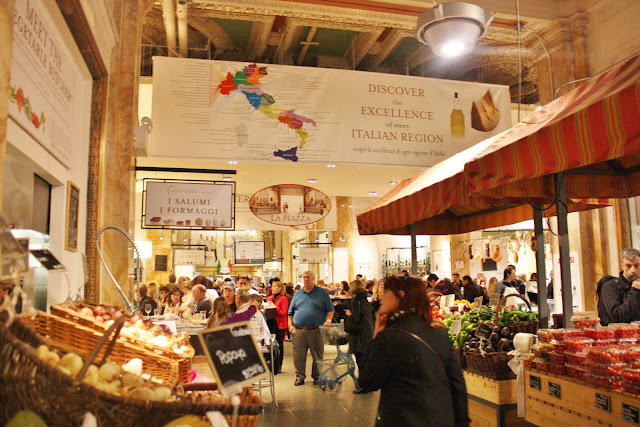 We spent a little while just wandering around and taking in the sights, sounds, and smells.  The vast array of offerings are overwhelming in and of themselves, but the high capacity of shoppers and diners alike make things borderline chaotic.

A and I both compared this to DiBruno Brothers, one of our favorite places to shop in Philadelphia (typically for specialty items only, since it is $$$)- but on a 100x scale.  It was difficult to tell what the general clientele was- NYC citizens? Tourists like ourselves? I'm not even sure what their target market is... Regardless, the place was not hurting for business- every table was taken, the upstairs restaurant (a bit more separated from the frantic pace of the downstairs market) had a 45 minute wait mid-afternoon on a Sunday, and the check-out counter was hopping.

We considered putting out name in for Birreria (the upstairs restaurant) but we really only wanted a little snack.  Unfortunately, the pre-made sandwiches, slices of foccacia pizza, and other easily consumable snacks are not allowed to be eaten on Eataly property.


We opted to grab a space in La Piazza- a central wine bar that utilizes standing height tables complete with bag hooks and compartments for silverware and plates for quick turnover.  An experienced waiter whisked from one table to the next, taking orders and checking on each of the patrons.  He even took the time to listen to the annoying guy next to us complain extensively about the no-"takeout"-food-eaten-inside-Eataly policy. 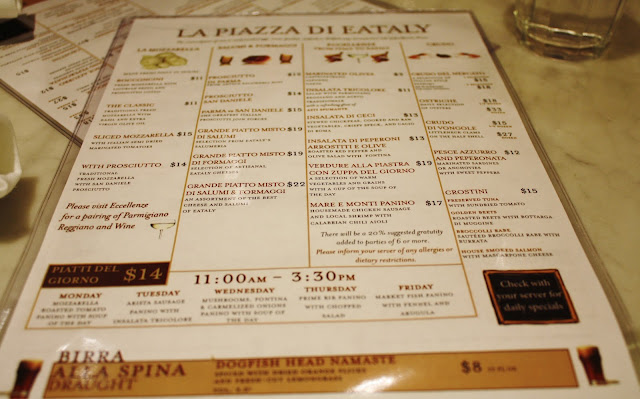 The menu is relatively simple- cheeses, meats, a few salads, a panino, and some options from the nearby raw bar.  We really weren't looking for anything expansive, but our waiter talked me into ordering the Grande Piatto Misto Di Salumi & Formaggi- a combo platter of meats and cheeses served with bread and a few accompaniments. 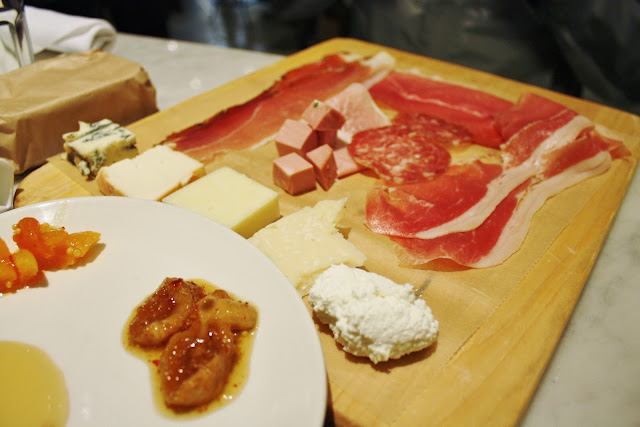 The plate was terrific- plenty for the four of us to get a taste of everything.  We each had a different favorite cheese, from the creamy ricotta to the sharp Parmigiano Reggiano to a beautifully marbled but mild blue. The pairing of the cheeses with the plate of accompaniments was a treat- they all had a bit of a surprising element, from the garlic in the honey to the spicy chili pepper burn of the apricots.  I particularly liked the honey with the Parm. Several types of cured meat, from ham, salami, chunks of mortadella- just a taste of each- were certainly high quality, flavorful without being greasy.  We paired bits of each with chunks of bread to make little open faced sandwiches.  A dollop of mustard would have been nice!

The atmosphere of the entire complex is incredibly friendly and welcoming, complete with charming signs and slogans ("You are what you Eataly").  I particularly enjoyed The 8 Rules of Vegetable Enjoyment- it's nice to see that veggies are getting their due attention in a cuisine well-known for meat, cheese, and pasta. 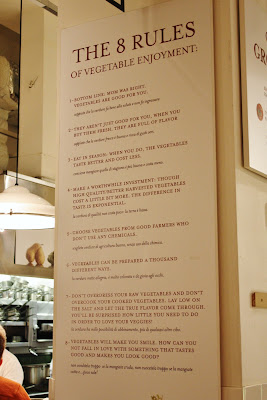 Even though my overall impression was a feeling of sensory overload, the concept of Eataly is terrific.  I would definitely head back next time I'm in the city, perhaps trying to go during the week or later in the evening when it's a little quieter.  Its central location certainly makes it prime for the mid-afternoon shopper to stop in for a bite to eat.