Paula Deen has a bad reputation.  She recently admitted to having Type II Diabetes and the majority of her recipes start (and end) with at least two sticks of butter.  However, it's hard to resist her bubbly Southern charm, and her recipes always look incredibly tasty.  A recently watched her make a number of dishes on an episode of her Food Network show- and one of them actually sounded healthy (I was somewhat suspicious...). 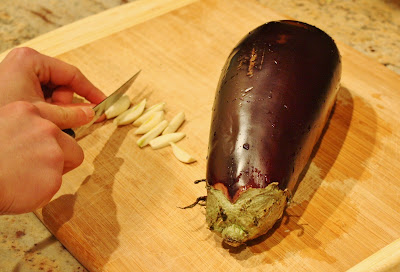 Preheat the oven to 450F.  Line a baking sheet with foil.  The fun part of this recipe is prepping the eggplant.  After washing and drying it, I used the tip of a sharp knife to cut slits about 3/4 of an inch deep and one inch long. I rotated the knife back and forth to widen the slits- maybe I'm weird but this definitely made me think of a voodoo doll... Next, take the pieces of garlic and push them into the superficial holes.


Place the eggplant on the baking sheet and lightly coat the sheet and the eggplant with cooking spray.  I roasted mine for about 35 minutes, flipping the eggplant halfway through.  It should be very soft with a somewhat wrinkly appearance when it is complete.  The skin will char a bit, but this is difficult to visualize since it is already such a dark color.

While the eggplant bakes, I set up my food processor and collected the remaining ingredients.  Obviously a bowl of dip isn't a meal, so I worked to chop and prep a number of "dippers"- carrots, cuke, celery, and pita wedges as well as some kalamata olives and marinated mushrooms.

When my eggplant was fully cooked (it had a good amount of "give" when I squeezed it with a pair of tongs), I used two forks to transfer it to my cutting board and then to peel off the skin. The skin should come off easily- another sign that the eggplant is ready.  It was extremely hot and steamy, so be careful! Additionally, be sure not to pull out the garlic cloves with the skin.  Don't worry about getting every single piece of skin off- I left a bit on the end (discard the stem).  Roughly chop the garlic and eggplant innards- it'll be a relatively unattractive pile of mush at this point.

I rather haphazardly scooped up the eggplant mush and transferred it to my extra-large food processor.  I probably could have gotten away with using a smaller processor, but use your best judgement based on how you've scaled the recipe.  I pureed the eggplant until it resembled a smooth version of its former self (still ugly..)- about thirty seconds. 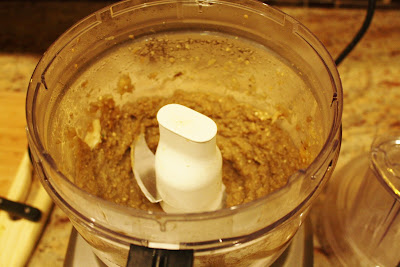 Add in the remaining ingredients sans parsley and process another thirty seconds.  The tahini really works some magic in making the dip look lighter in color and much smoother- it will start to resemble hummus. 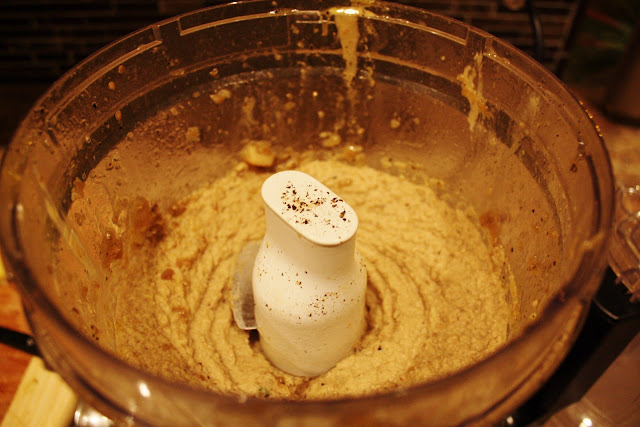 I roughly chopped a good handful of flat parsley and pulsed that just a few times to mix it in.  Obviously the parsley is entirely adjustable in terms of quantity and how fine you'd like it to be.

We both really enjoyed this- the simple combination of a little citrus, garlic, and parsley really brighten the eggplant without completely masking its subtle flavor.  After the eggplant came out of the oven, I completed the process relatively quickly, so it was still warm at serving. It took the edge off of an otherwise cold meal, but a cooled version would be more suitable for the summer months.  Another note- the quantity ended up being a little less than I had expected- eggplant has a high water content so it cooks down quite a bit.  This would be a fun make-ahead dinner party appetizer, but be sure to use two or three eggplants if you're making it for a crowd!