What I Learned at COOK

We had the extremely good fortune of snagging tickets to one of COOK's February classes.  If you haven't heard of COOK, it's a "Collaborative Kitchen-Classroom," or in other words, a place where you spend an ungodly amount of money to spend a few hours chowing down with your favorite chef(s).  Co-sponsored by the one and only Foobooz, as well as Philadelphia Magazine, it really doesn't need their press.  The class we signed up for sold out in just hours, and we all laid down $145 a person for an event we really knew very little about.  Described as a neighborhood "pop-up," all we knew was we would be eating with a number of chefs representing restaurants from the Fishtown district.  Since it is considered a "classroom," we present to you: What I Learned at COOK.

1.  The flavors and personalities behind Loco Pez, Fishtown's new SoCal-style taco joint reinforced my desire to make it to the restaurant.  Operated by co-chefs "Big Joe" and "Little Joe," the key is a combination of simplicity and freshness.

2.  Yes, at COOK, they do sometimes cook for you while you watch.  Fresh guacamole was prepared for us as a pre-dinner snack.  Other items, such as the marinated and slow cooked short ribs used in one of the taco varieties, are prepared ahead of time. 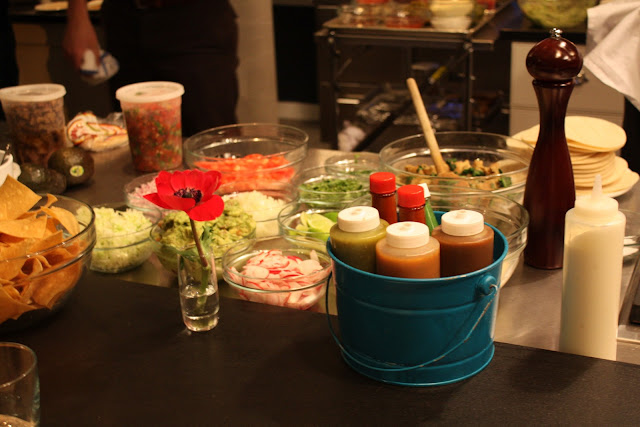 3.  Four courses, each from a separate restaurant, will leave you stuffed beyond belief.  In this case, it's best just to go with it.  While none of the courses really meshed with the others, the timing of the evening was such that it was like consuming four mini meals. 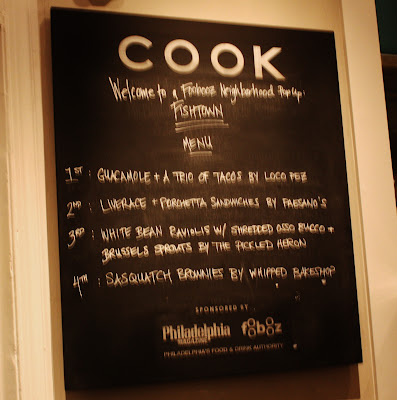 4.  The chefs of the evening were wonderfully enthusiastic and great fun just to be around-- and that's without even taking their cooking skills into consideration.

5. Sharing a bowl of chips and guac with the 15 strangers helps to break the ice.  They also have a formal icebreaker, in which chefs and patrons alike stated his/her name and last great meal in the city. 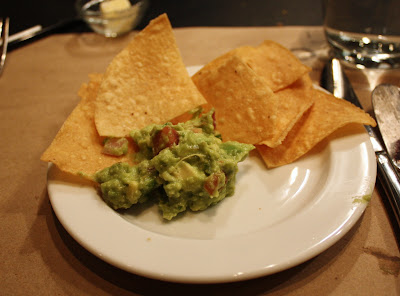 6. Loco Pez uses a marinade for their short ribs that includes sugar and soy sauce.  Not sounding particularly Mexican?  Apparently there is quite an Asian influence in both Mexican and SoCal cuisines- and although I have zero hard sources for that, the sweet and salty mix worked wonders for the often tough cut of meat. 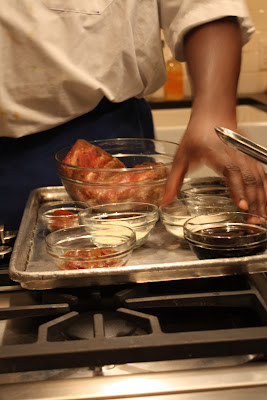 7. The three tacos were worlds apart in terms of flavor and texture, but each was outstanding.  My favorite was the deep fried grouper taco (hello, white sauce), but J's favorite was the seitan- chewy, salty and.. almost meaty!  The accoutrements pumped up the flavor profile- a little cilantro here, some raw onion and a squeeze of lime there, and a dollop of housemade spicy green salsa on it all.

8.  Loco Pez doesn't use housemade corn tortillas, but the little guys were just simple carriers for the good stuff on top. 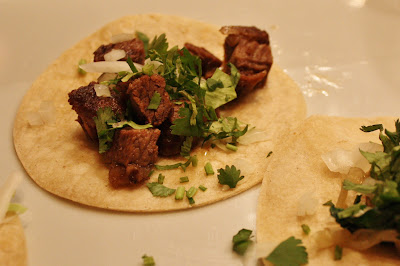 9. On to our favorite course of the evening- "sandwiches" from Paesano's, made by Peter McAndrews himself.  He demonstrated the preparation of the roast pork (for the Porchetta Sandwich- also known as the Arista at the shop), but this huge hunk of meat was never ours, as we once again relied on a pre-made roast.

10. McAndrews uses whole cloves of garlic, lots of fresh herbs and his secret ingredient- anchovies- in his preparation of the roast. 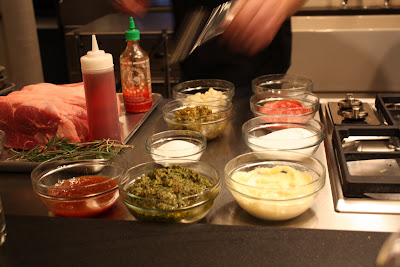 11. What should you use if you don't have fresh herbs on hand?  Well, you should stab yourself in the leg.  And in the case of one who may not enjoy anchovies?  Might as well kill yourself.  Advice straight from the man himself.

12.  McAndrews loves to use sexual innuendos to help novice chefs understand the art of cooking.


13. Jerry Blavet (also known as Geator with the Heator/Boss with the Hot Sauce) might make an impromptu appearance in the middle of a COOK class.  Seemingly welcomed off the street, he was greeting fans (ie the older members of the class) and sipping a drink for the duration of McAndrew's class time. 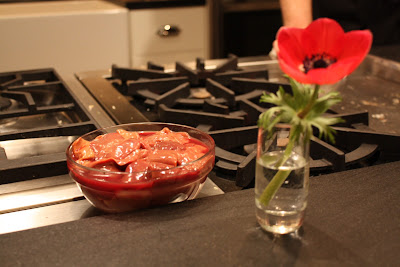 14. Chicken livers, when doused in hot sauce and flash fried, are nothing to be scared of.

15.  Don't want an entire sandwich?  Need to make a plate of appetizers for a large group?  Construct your favorite sandwich open-faced style on slivers of toasted baguette.

16. Broccoli rabe pesto is delicious- a unique way to add the bitter greens to a dish without having to deal with their bulk.

17.  Next time I go to Paesano's, I'm getting the Liverace. One of the best sandwiches I've ever had-- a surprise hit with orange marmalade and chicken livers-- who would have thought?

18. I don't make homemade pasta, but I might get an attachment for my future KitchenAid mixer just for this.  Daniela makes it look like a breeze. 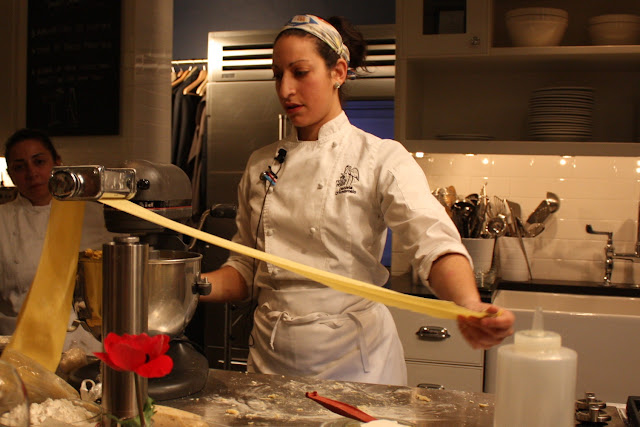 19.  The Pickled Heron- open just eight weeks at the time of our class- has been making a splash in the Philly dining scene.  OK, I didn't learn that at COOK.  But I DID learn why- this girl has talent.  Classic French food made by an Italian?  Somehow, it works.

20.  Homemade raviolis (well, made by a professional) to serve a crowd of fifteen take about twenty minutes from start to finish.  I'm impressed.

21.  Some of the lone veggies of the night- pan roasted brussels sprouts and butternut squash- played a huge role as a topping for these white bean raviolis.  The rich, slow roasted, meaty shredded osso bucco didn't hurt either.

22. A lot of people in the food industry don't take a straight path to get there.  Zoe Lukas is an artist by training, but uses her design skills to make beautiful- but also incredibly tasty- baked goods. 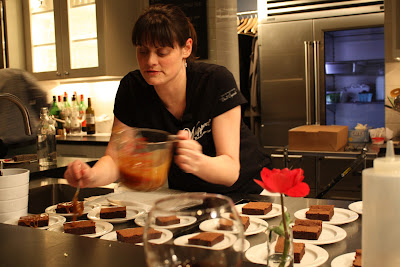 23.  The Sasquatch Brownie is so named because it is simply legendary.  Zoe did note that some patrons of her shop are embarrassed to ask for it by name.  But don't be- it is hands down the best (and also most decadent) brownie in the city.  And now I have the recipe.

24.  Zoe used the microwave to melt the chocolate for the ganache- and swears its the best method.  George Perrier is the only other chef to use the microwave at COOK, at least so far.

25.  Our "favors" for the evening: almond sugar cookies with amazing icing designs (one depicted the storefront of Paesano's!).  Want something similar from the shop?  That'll be $4.75. 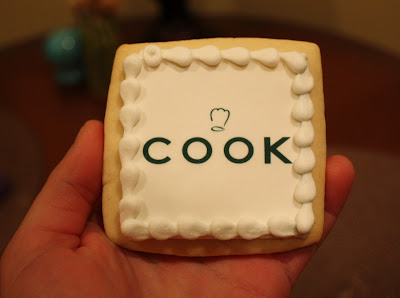 26.  Describing our experience at COOK is impossible- you just have to live it.  It'll be the most we pay for any food event this year, but it was 100% worth it to spend an evening getting to know the chefs of some of our past, current, and future favorite spots in the city- and indulge in a night of amazing eats, of course.

27. It wouldn't be possible without the people at COOK, the chefs and their sous chefs, or the men of Foobooz and Philadelphia Magazine.  For an endeavor I at first thought might be frivolous, they have turned it into a truly one-of-a-kind Philly food event.

Nominated for the Epikur Writer of the Year Award

Whipped Bakeshop
636 Belgrade Street
Posted by A and J at 9:00 PM