Seems like we've been using a lot of Groupon type deals lately... they certainly help lure us to places we might not otherwise be inspired to try.  The Corner used to be a cocktail bar, but was reinvented as a sleek yet casual American restaurant serving up fun twists on classic comfort foods.  We actually tried to use a deal for The Corner a few weekends ago, but a sign saying "Temporarily Closed" and a giant pit in the street outside deterred us- apparently road work had caused some serious power and gas shortages to a few restaurants on busy 13th Street.

We ended up trying again about two weeks later for a week-night birthday dinner celebration, and the manager recognized us from our conversation with him during the power outage.  Apparently the heat still wasn't running, but space heaters and unseasonably warm weather made it tolerable.  The manager was completely gracious (especially for something that was not in any way the restaurant's fault) and we got extra special treatment for returning.

Even though we were dining during Restaurant Week, we were allowed to order a la carte, which was much appreciated (though their 4 course RW menu definitely seemed like a good deal- we just weren't in the mood for that much food!).  We started out with a "snack"- the fried pickles with spicy mayo ($3), a few chunks of soft pickles encased in a light tempura batter.  The lightness of the tempura allowed it to stay intact with the pickle inside, soaking up the salty brine. A side of mayo-based dip was thin and essentially a creamy version of Frank's Red Hot.  I actually forgot I was eating pickles at one point,  it tasted so much like wing sauce. 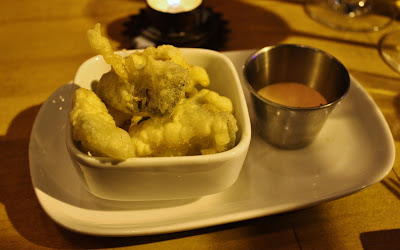 So many of the small plates sounded amazing- it was practically impossible to pick just one.  From the bay scallops & dumplings to the jalapeno grit cakes, the advertised "American cuisine" definitely has a good Southern influence.  However, we were most intrigued by the warm potato salad ($8).  A pile of perfectly al dente fingerling potatoes tossed in a light truffle oil-based dressing was layered with a few slices of extra salty, pale pink deli ham and roasted pearl onions.  A fat poached egg rested atop the haphazard layers.  We both really enjoyed the truffle flavor infused into the potatoes- subtle enough to allow the parsley and roasted onions to maintain their presence.  The one "miss" on this dish was the ham- it definitely had a weird texture. 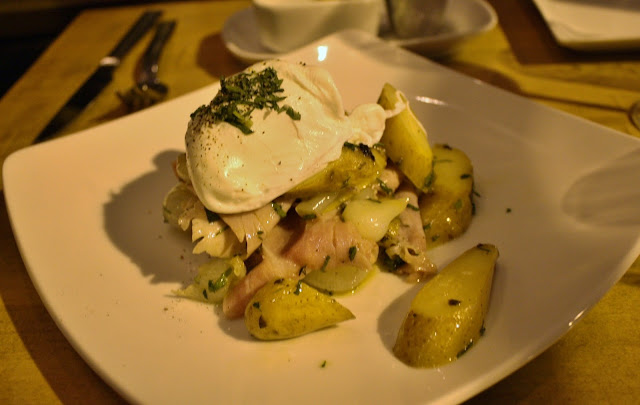 A encouraged me to order the seafood hot dog ($12)- certainly a unique menu item.  Served on an extra-pillowy potato bun with a thick squirt of avocado mayonnaise, the dog itself is griddled to a crisp.  It had a snappy bite and an inner texture reflecting the scallop and shrimp within.  Definitely a fun alternative to the greasy version of who-knows-what kinds of animal parts.  A side of chips were paper thin and lacked any real flavor, but the coleslaw was crisp and fresh with a perfect balance of pepper-y spice and acidic vinegar. 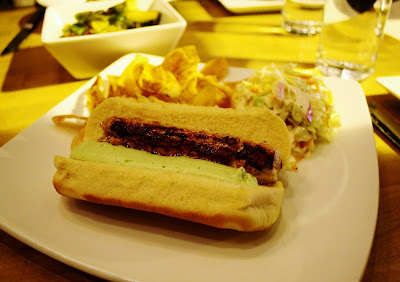 A explored the only vegetarian option of the "larger plates"- the sweet potato turnip gratin ($14).  Crispy thin layers of the starchy vegetables were somehow arranged in a perfect circle and baked under a parmesan cheese crust.  A bed of soft beluga lentils were on the plain side, but added a necessary protein element that some restaurants seem to leave out of their veg options.  Overall a hearty winter entree that again displayed that perfect al dente texture through the layers of the gratin. 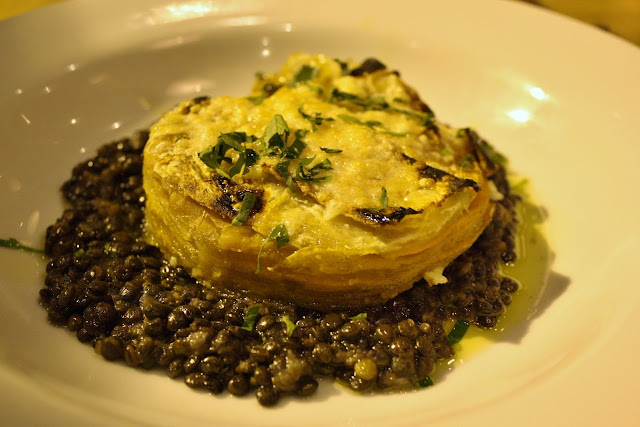 To complement the real lack of green vegetables in our meal, we ordered a side of our classic favorite- the brussels sprouts ($6).  Quartered with a good bit of stem, the large chunks of brussels were tossed in oil and oven-roasted to a nice crispy outer char.  Bits of thick-cut homemade Italian bacon gave a salty, chewy compliment to the softer sprouts.  A solid serving of veggies served up in a classic rendition that was full of flavor- not particularly inspired, but certainly satisfying. 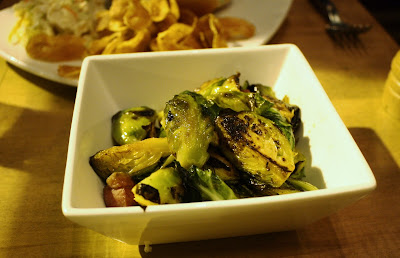 The Corner has so many interesting choices across the board, so I was sort of surprised when we took a look at the dessert options- a brownie, pound cake, and a bread pudding.  The latter, made with banana bread and served with a cranberry sauce, was the only real original dessert- but not enough so to compel an order.  Maybe next time?

We're quite glad we circumvented the original deterrent and made it back to The Corner to see what John Taus had up his sleeve.  The restaurant has cycled though a few chefs, but we enjoyed this rendition of the menu and would recommend it to anyone looking for a casual dinner- a few degrees removed from classy Barbuzzo only a few doors down, but certainly offering a menu full of tasty and inventively-altered classic American dishes.