While recapping my long weekend in San Francisco, I purposely didn't mention one of the dinners that I ate while there- the gastronomic highlight of my trip.   During our halfhearted watching of the Super Bowl, the other girls and I discussed the options for the evening- the one night we were actually all able to spend time together.  I had primarily researched restaurants within walking distance of our hotel, but thankfully one of my friends has tons of travel experience and had scoured SF forums on Chowhound.  She suggested checking out a Moroccan restaurant on the opposite side of the city in the Richmond District. 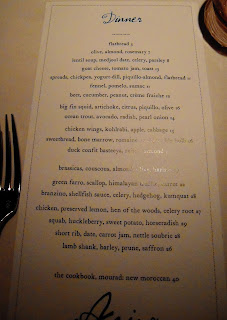 Aziza is owned and operated by a Marrakesh native who focuses on reinventing traditional Moroccan dishes and taking advantage of local and seasonal ingredients.  The space is simply decorated with warm colors and textures and arching doorways.  The front room had cozy banquet seating with plenty of pillows, but we were seated in the quieter back room.  There is the option to do a 5 course, $95 tasting menu, but we stuck with the a la carte selections.

As a group, we opted to split three appetizers.  Though the portions aren't huge, it was certainly enough for the four of us to get a good taste of each dish.  We made the easy choice of flatbread and dips ($11)- wedges of fluffy grilled pita served alongside three dollops of different spreads.  My favorite was the yogurt-dill- a perfect smooth and thick texture for smearing on a bit of bread.  The vibrant piquillo pepper and pine-nut dip had a subtle sweetness while the chickpea was a simple garlic-y hummus sans tahini.  When a significant amount of the dips remained after the bread disappeared, our waiter brought us another full bowl of pita brushed with olive oil. 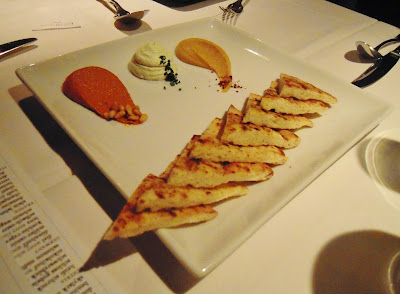 Our second starter was another simple dish- a beet salad ($12), the plating of which looked incredibly precise.  Translucent shavings of cucumber were carefully twisted into scrolls surrounding squat cylinders of deep purple-red beets.  The beets were surprisingly soft and tasted as if they had been pickled in condensed beet juice- an intense flavor that was slightly too sweet.  Spicy roasted peanuts and dollops of creme fraiche provided crunchy and creamy textural compliments.  A well-conceived dish, though the over-sweet beets pushed it to "least favorite" status. 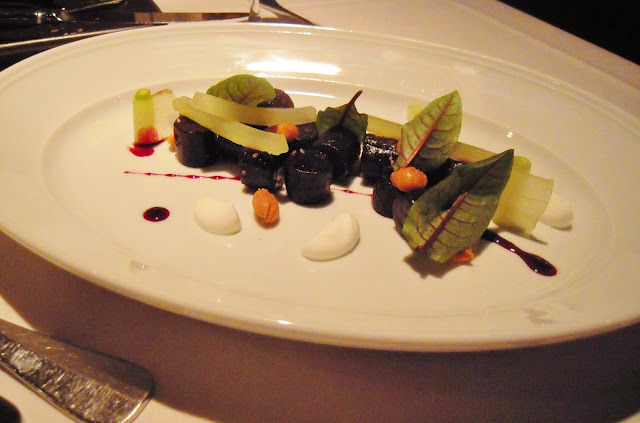 We got a little more adventurous with our third dish- the sweetbreads ($16) served with romaine and crunchy pieces of a cured meat that had a consistency similar to fried pork rinds.  Our menu advertised bone marrow as an accompaniment while the menu on Aziza's website listed a completely different rendition, so it seems like a highly adaptable dish.  Three fat, lightly fried chunks of thymus serve as the base of the dish and these were by far the best I've had.  The size of each piece was commendable, but the soft texture- reminiscent of a well-cooked scallop or a fried oyster- was heavenly. 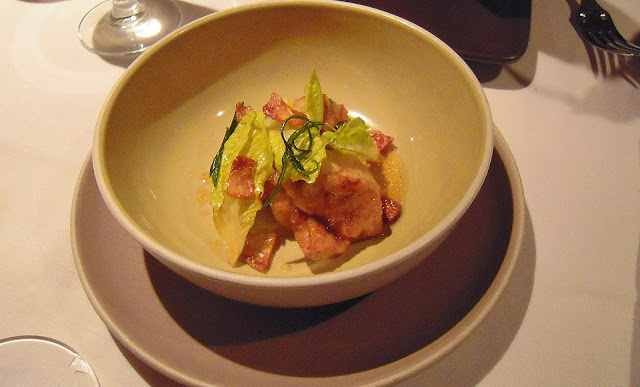 There was a nice lull in the meal at this point, but after the outstanding apps I think we were all anticipating the next course.  I ordered the short rib ($28)- a solid, fork-tender chunk of meat.  I've had my fair share of short ribs, but they've always been served with either a bone or a good amount of connective tissue.  I kept expecting to come across one or the other, but each bite was slow-cooked, perfectly seasoned, juicy beef, pure and simple.  Carrots two ways- raw shavings and a deeply spiced mash made a unique starch component.  A few roasted cippolini onions and a sweet fig glaze harmonized the sweet and savory aspects.


We finished the meal on a sweet note, sharing two desserts ($10 each).  Extremely dense panna cotta served with a scoop of a cinnamon-tinted vanilla ice cream, crumbles of gingerbread, and a smear of spicy quince paste was just another example of Aziza's genius flavor and texture profiles. The chocolate mousse was less exciting, but the candied kumquats and hazelnut crisp accented the airy, almost custard-like milk chocolate. Like the rest of the dishes, nothing seemed over-complicated- there was always an undertone of simplicity, allowing the ingredients to speak for themselves.

Throughout our meal, the service was excellent.  Our waiter had a great sense of humor, and the lone food runner had a low, sultry voice perfect for describing each dish in the most sensual way possible.  The meal was well-paced, which wasn't much of a surprise considering how quiet the dining room was that evening.  To cap off the dining experience, our waiter delivered an extra plate of treats along with the bill- a small, key lime filled pavlova, a raspberry fruit square, and a bite of chocolate ganache covered peanut butter bar.  The pavlova ended up being my surprise favorite- I don't typically like meringue but the key lime cream shocked my tastebuds into a state of supreme happiness. 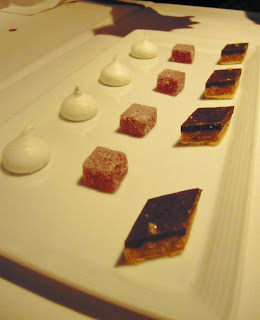 Between Philly, New York, and Boston, I've eaten at a number of highly-rated restaurants and enjoyed an absurd amount of top-notch food.  Regardless, I left Aziza in an almost euphoric state, proclaiming it "the best restaurant I've eaten at in quite some time."  I didn't know it at the time, but Aziza is Michelin rated (one star)- the only restaurant with this accolade at which I have eaten.  I'm so glad that we decided to make the long trek across the city to check it out- it only made me fall for SF that much harder.