Many months ago, I casually mentioned to my Roxborough-dwelling significant other that he should purchase a Groupon for a multi-course meal for two at The Tomato Bistro.  The Manayunk eatery is the recent addition to the dual Tomato restaurants right off of Main Street.  While firstborn The Couch Tomato Cafe specializes in walk-up, laid-back American cuisine- think pizzas and sandwiches- the Tomato Bistro is its slightly upscale, full-service counterpart.  Opening last October, their November Groupon offer was assumedly a ploy to draw attention to the new space.

I later forgot about the Groupon until December, when I was surprised with it as a Christmas gift.  Since its expiration is approaching in March, I nailed down a night for us to use it.  Upon arrival, we were led up to the top floor, which features a balcony overlooking the larger second floor seating area.  It was fairly empty upon arrival, but it was packed by the time we left- looks like they have had no trouble bringing in business.

Our Groupon provided us with a TON of food (for only $25!), and let us sample from every part of the menu.  While we were perusing the options, our waitress brought us each a tiny cup of- you guessed it- tomato soup.  I actually think this was a small serving of their "Pizza Soup," a combination of a thick, sweet tomato sauce flavored with basil and a splash of cream with a piece of well-toasted crostini soaking up the juices.  The bread was my favorite part- it crumbled like a dense shortbread cookie on every bite.  Plus, I'm always a sucker for a fun "amuse bouche."

We then selected our options for the evening, which included three small plates (from about twenty options spanning seafood to mac n'cheese to bruschetta), a pizza, and a salad.  I immediately knew I wanted the Crispy Artichokes (typically $8.99), and I received a somewhat begrudging "Merry Christmas" for the choice.  Three baby artichoke halves were prepped and deep-fried, reminding me of my recent first exposure to deep-fried artichoke hearts at Varalli- now that I've tasted it, I can't ignore it. 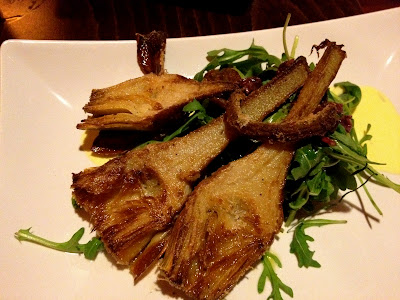 Served over a bed of arugula and a small pool of lemon-scented aoili, it was kind of a mini-salad.  The frying process gave the 'chokes a super soft texture without ruining their subtle flavor- even my veggie-avoider enjoyed a piece.

His addition to the table was an order of the Kobe Sliders ($8.99), which come as two mini burgers, each with different toppings.  The mini grilled brioche buns and the melt-in-your mouth, buttery meat would have been beautiful all on their own, but they also paired well with both a grilled portobello + truffle oil combination as well as the guacamole + pepper jack topping.

Our final appetizer was an order of mussels- something we can both always agree on.  With three options for cooking styles, we settled on the assumedly classic combo of White Wine and Garlic ($9.99).  The portion was perfect to split, and the mussels themselves were so big I'm still wondering how they fit in their shells.  My major complaint was the sauce- while it wasn't overpowering to the mollusks themselves, I wouldn't want it on its own- flavors of fennel and capers dominated, while the wine and garlic seemed to be missing.  Thankfully, the bread served alongside was one of my favorite parts of the meal- a hunk of wheaty, fluffy foccacia that I made sure steered clear of the remaining juices. 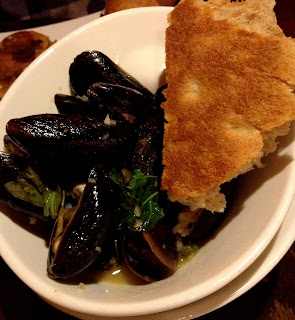 As our small plates were cleared, our waitress brought out the salad portion of the meal.  Their salads are meals in themselves, and even though I picked one of the lighter options, the Goat Cheese Salad, it was impossible to finish ($9.99).  A huge pile of spicy arugula (thankfully I love it, after the artichoke dish) was nestled in a bowl with a blanket of dried cranberries and huge bits of salty bacon, all of which was sprinkled with a brown butter-dijon dressing.  I usually hate typical restaurant heavy-handed dressing applications, but this was light enough in flavor to not drown the greens.  Three crunchy balls of fried goat cheese were obviously the highlight of the show-- goat cheese + deep fried shell = what's not to love?

The Couch Tomato and the Tomato Bistro specialize in flat bread pizzas, so I was glad we were able to sample one.  They have a number of unique options, including Fig (with fig butter + pears), Duck & Apple, and Guacamole (Mexican flavors), but we went with Pulled Pork ($12.99).  We love pulled pork and we love pizza, so what could go wrong?  Their crust is thin and chewy, not the thick, doughy kind I prefer, but at this point of the meal, I wasn't gunning for a filling dish.  Large pieces of shredded, slow-cooked pork are combined with softened onions cooked in a chipotle sauce that had a hint of cinnamon sweetness- not my favorite, but it wasn't overwhelming as long as you didn't get a huge bite of onion.  Smoked gouda and mozzarella covered the whole mess, providing essentially an open-faced pulled pork sandwich. 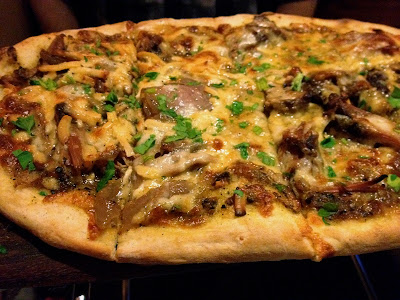 The pizzas are well sized for two to split for dinner (salad + pizza for two would be perfect), or would be great split with a small group for a snack during a Main Street shopping trip- the Tomato Bistro is open at 11AM every day of the week. 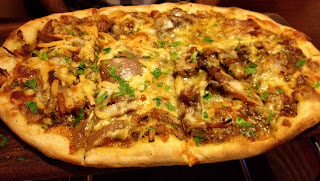 Our final bite of the night was dessert.  We were given three options: creme brulee, flourless chocolate cake, or cheesecake.  It was a no-brainer since we both love cheesecake.  The rendition here seemed more or less homemade (it's sort of hard for me to tell!), with a dense graham cracker crust and a smooth, creamy filling.  The swirls of overly sweet chocolate syrup was a distraction at best, but easily avoided. 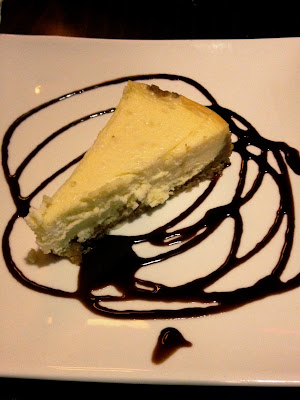 Overall, our meal at the Tomato Bistro was just what I wanted- a relaxed atmosphere, relatively quiet but with a fun vibe (I could see it getting a little crazier later at night), solid eats with plenty of menu variety for the picky to the adventurous.  Especially with our Groupon, it was incredibly well-priced.  On a future visit, I would definitely cut down the number of dishes, making it even more affordable as a date spot.


The Tomato Bistro
102 Rector Street
Manayunk
Posted by A and J at 9:31 PM