I've always been an East Coast-er -- born and
raised in Florida followed by a now almost 8 year stint in Philadelphia.  The cliched view of the West Coast is less than enticing- snarled traffic, high prices of real estate, and lots of privileged stars?  No thanks.  Although I've visited family in Washington and traveled a few times to Western Canada, I'd avoided California until last year, when I spent a few days in Long Beach for a conference.  Although it was gorgeous and sunny and I was able to dip a single toe into the Pacific Ocean, it didn't have much of a personality.  Fast forward one year, and a return trip to the same conference had me destined for San Francisco.


My hopes were a little higher for this trip since I have friends in the area and the city has a bit more of a history than Long Beach.  However, I was in no way prepared for the instant rapport I felt after coming up onto Market Street off the BART train.   It has a certain sense of livelihood without being overwhelming.  The steep hills and cable cars give it a unique charm, and the 65 degree sunny days we enjoyed didn't hurt a bit.

The first day of the conference was jam-packed with seminars and poster sessions, but I did sneak out with a couple of friends for a quick lunch at 'wichcraft, a casual sandwich shop owned by Tom Collichio of Top Chef fame.  We actually received a cookbook from this shop as a contest prize, and of course my love for the snarky bald-headed man himself made the choice a no-brainer.


Unfortunately, we were all pretty disappointed by our sandwiches.  Considering a well-respected chef put together a menu with plenty of creative sounding options, it was surprising that each of our choices seemed lackluster and flavorless.  My pulled pork with jalapeno slices and 'slaw on soggy ciabatta was completely bland.  A friend was so put-off by the lack of flavor in her brisket that she couldn't bring herself to finish it.  The saving grace of the meal was a small crunchy cookie sandwich- chocolate chip with vanilla creme.  Really Collichio? I know this isn't upscale dining, but I expected better. 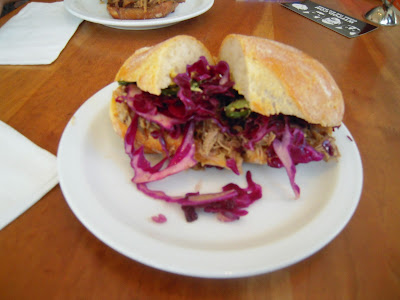 The following day I had a few things to attend in the morning, but took advantage of a free afternoon and a cloudless sky and set off on an expedition.  Armed with a map and a restaurant recommendation, I headed south to an area known as the Design District.  Even though I estimated my trip to be about 12 blocks, SF blocks seem ridiculously long, so the walk took at least half an hour.  By the time I reached my destination- a hippie-ish, mostly vegan (100% veg) cafe- I was ready to eat.
The Source is a "multi-dimensional dining experience"- they advertise super-purified water and air, as well as stimulating music and colors.  Since I was dining alone, I could barely make a dent in the menu- they offer a long list of salads, sandwiches, pizzas, desserts and "elixrs" that would cater to any palate.  I never seem to get enough veggies when I'm traveling, so I decided to try the "Living Green Goddess"- a raw dino kale, carrot, sesame seed and red cabbage salad with a "living" green goddess dressing.  A & I make a salad similar to this quite often, so I enjoyed its familiarity as well as a little extra crunch in the dino kale.  Perhaps it needed a little squeeze of lemon to brighten the flavors and wilt the greens a bit. 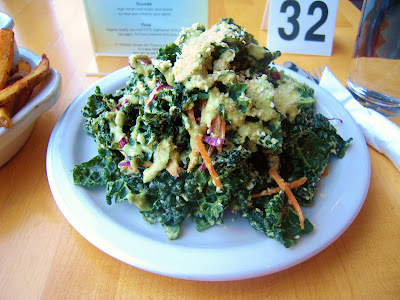 I knew I would be walking a bit more and wanted to eat something other than some greens, so I also ordered a side of Source fries with sesame sea salt and a side of creamy gilroy garlic sauce.  A fun selection of salts and sauces like jalapeno jam pump up the interest factor on an otherwise standard side dish.  This hearty bowl of thick-cut, crispy potatoes were piping hot and incredibly addicting- especially with a little scoop of garlic sauce. 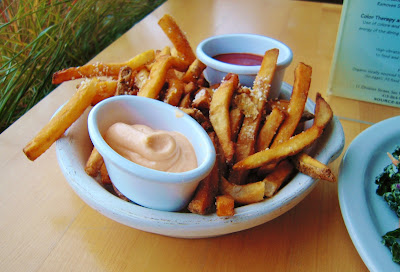 After refueling at Source, I headed out to my next destination- a famous SF bakery in the Mission district.  I had purposely avoided anything sweet for lunch (though the selection of brownie bites and cheesecakes at Source looked terrific) in order to try a few pastries at Tartine.  Tartine is one of the gems I found while searching the internet for food tips in the area- and it's booming popularity ensures a line out the door at all times. 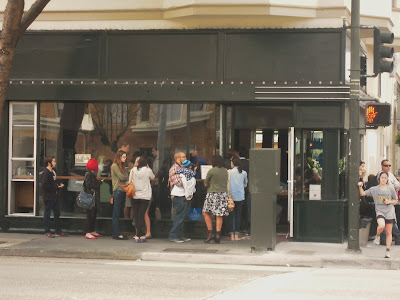 Thankfully, the line moves quickly, with several ladies working the counter and lining up the orders as they're placed.  I needed a few minutes to take in the numerous treats and sweets displayed across several glass cases.  The decisions were tough, but I finally settled on three items.  Tables are first-come-first-served, so as a lone patron I decided to take the goods back to my hotel for consumption. 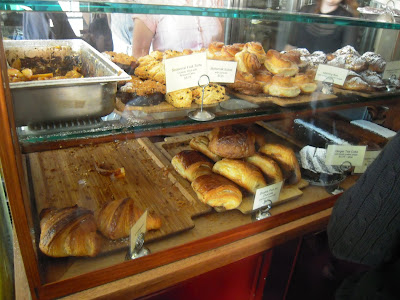 On the way I passed through the vibrant Mission district with endless markets and Mexican cafes.  I ended up stumbling upon a BART station which was decorated in brightly colored tiles and the sounds of men speaking fervently into loudspeakers en español.  Two stops on the train and I was whisked the three miles back to the SOMA (South of Market) district.

I dug into my bag of treats and started out with the macaroon- a little coconut ball of joy that I bought at the last second seeing as it was only $0.75.  Dense and sweet with a hint of lemon and the textural delight of shredded coconut- it was macaroon perfection. 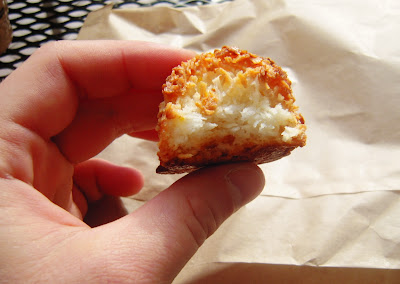 Another somewhat impulse choice was the chocolate chip cookie- a large, incredibly thin and crispy sheet of baked sugar and butter.  I much prefer my cookies to be dense and chewy, but this rendition- with its rich caramel flavors and studs of dark chocolate- was still plenty enjoyable.  I ended up breaking off a few pieces and saved the rest for a pre-hilliest-morning-run-ever snack. 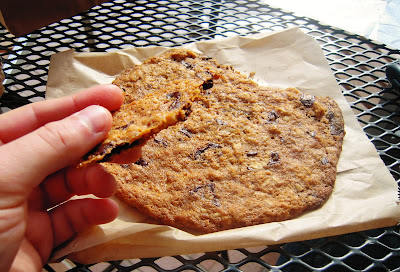 Of course I saved the piece de resistance for last- the pain au chocolat.  Melt in your mouth flaky crust encasing pillowy folds of puff pastry with a core of solid dark chocolate... words cannot even describe the levels of richness and the magnitude of soul-satisfying capabilities embedded within this "chocolate bread."  Its absurd size made it easy to share with my foodie roommate- and I think it convinced her to make her own pilgrimage to Tartine. 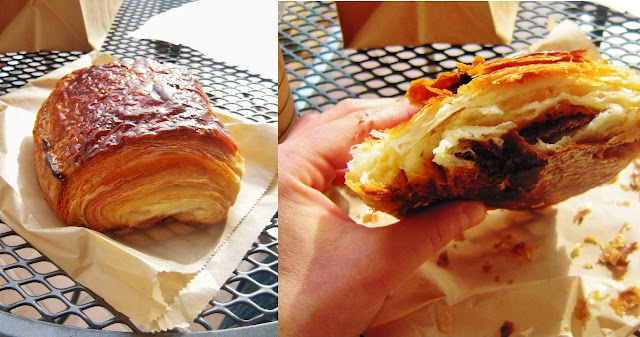 My last full day in SF was spent almost exclusively as a tourist.  After a long run over the hills (mountains?) and along the bay, a few friends and I took the short and scenic ferry ride out to Alcatraz Island.  The views were amazing and the trip itself immensely educational- Alcatraz has a long and rich history largely unrelated to Al Capone and other high-profile criminals. 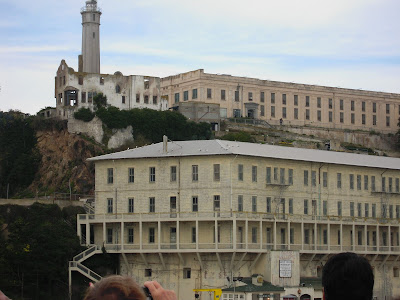 After our informative tour, we walked along the water till we came to Fisherman's Wharf- a famous tourist-y section on the Bay.  We stopped for lunch at Boudin, a well-known sourdough factory that must pump out a million loaves a day.  Everyone ordered clam chowder in a sourdough  bread bowl, and while the soup wasn't particularly exciting, the crusty, soup-drenched bread with that perfect sour twinge tasted like quintessential SF- my dad claims its the fog that gives the bread its distinctive flavor. 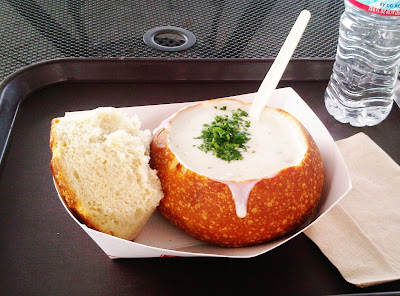 Our last gustatory stop of the trip was another SF staple- Ghirardelli.  Apparently the shop can form long lines in the busiest of tourist seasons, but we hardly had to wait to place our order.  A free square of caramel chocolate appeased us while we scoured the menu.  There are milkshakes, sundaes, and ice cream concoctions of all shapes and sizes, but I kept it simple with a scoop of Ghirardelli chocolate ice cream in a chocolate dipped waffle cone.  Rich and creamy with the perfect balance of sweet and bitter- a great way to end the day. 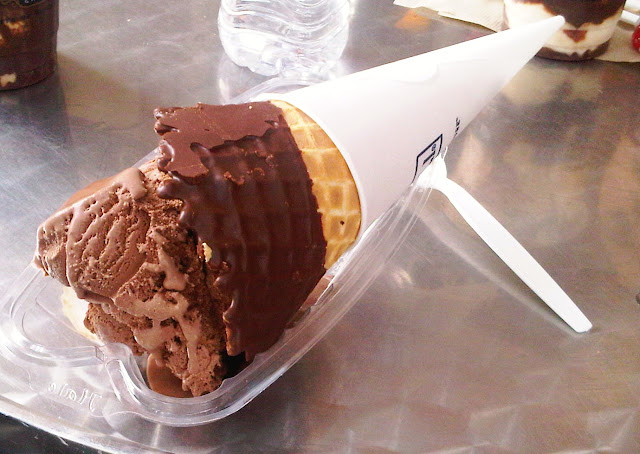 I truly cannot express how much I loved San Francisco.  The few short days that I spent there were such an amazing combination of good eats, good friends, and good science- it just provided me with an overall refreshed feeling toward life.  And certainly a new perspective on the West Coast!
Posted by A and J at 10:05 PM