It's not a rare event for us to review a brand-new restaurant.  It IS unusual for us to discuss our first time trip to a restaurant that is nearing its last days- but that is what this is.  Chef Daniel Stern's locally inspired University City spot will be closing on February 24th, and we almost allowed it to run its course without visiting.  One of our friends is a huge fan of the restaurant, and was looking for anyone who would join her for a meal before it closed.  Perhaps we shouldn't have visited, as now we know what we'll be missing, but we're glad we finally gave it a go. 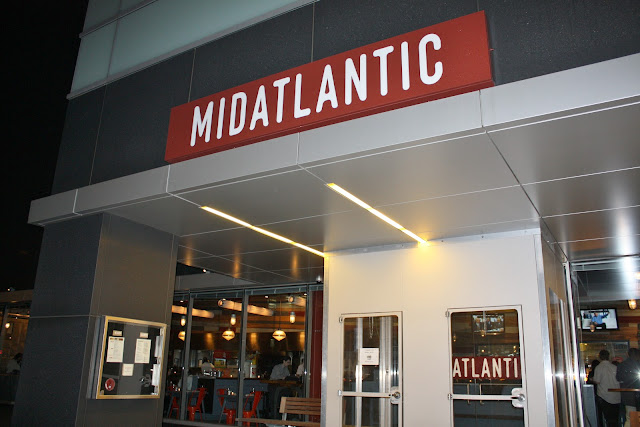 The space is not in an ideal part of town for business- mostly university and office buildings surround it- but inside and out, it is unique and provides a feeling of funkiness and fun.

The menu has been cut down significantly from its original, probably because of decreased staff and just the gradual process of closing down.  However, we really just wanted an assortment of small plates, and many of these are still available.  First up- the bread service.  Our friend was pretty excited to introduce us to the flaky, buttery spiced biscuits, but later said they were different from the original.  Either way, we loved them- small enough that you won't fill up, and flavorful enough that you really don't need more than one.  They are salty and savory, with almost a Thanksgiving stuffing flavor (sage?). 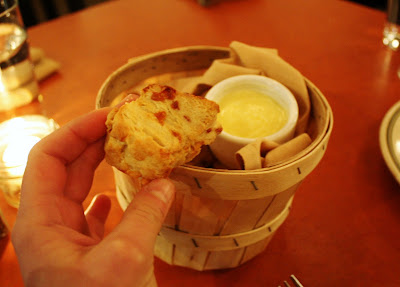 We ordered a number of small plates to split, the first of which was the Pig Wings ($12).  A bit on the pricy side for an appetizer, but with a name like that, you can't skip them.  However, they're a bit misleading-- they aren't wings at all. Instead, they are small cubes of soft, fatty roasted pork, breaded, fried, and tossed in a rosewater-molasses sauce.  They were crunchy on the outside, but the inner texture was more like pork belly.  The thick sauce was a balance of sweetness and spice (and no apparent sickly rose flavor), and while the garlic buttermilk dipping sauce on the side was good, it was kind of overkill.  As weird as these little guys were on first bite, they were rather addicting. 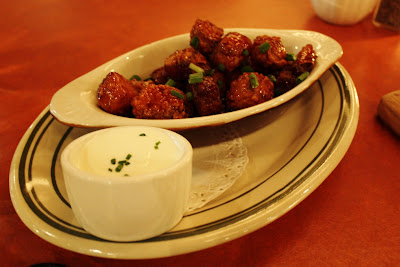 The menu also has a bit of a Southern flair (starting with the biscuits!), and the inclusion of fried green tomatoes made us happy.  Their version comes served over a smoky mayo based spread, and is topped with a heap of arugula tossed in a light bacon vinaigrette ($8).  The tomatoes themselves were lightly breaded but overly fried, leaving limp, softened slices of tomato where we expected firm green tomatoes with a good bite.  Perhaps that's what we get from ordering tomatoes in February? 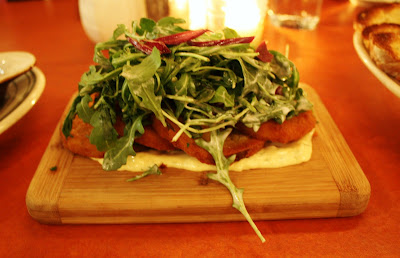 Our second tomato-based dish sounded great on the menu- a Smoked Tomato Fondue ($10).  A huge bowl of rich pureed tomatoes was topped with a hefty drizzle of a smoked basil pesto and a slice of melty goat cheese and a bit of oregano.  Toasted slices of baguette to scoop it all up made it almost like a deconstructed margherita pizza.  The bread to sauce ratio was way off though, and the cheese was really hard to scoop up with the rest of it.  Many bites just seemed like bread dipped in canned, stewed tomatoes-- it didn't taste bad but it was definitely our least favorite. 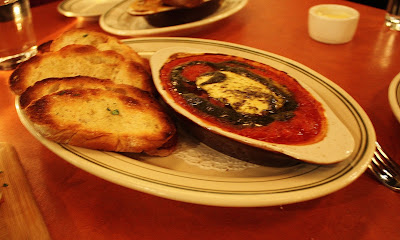 Our friend ordered her all-time favorite menu item, the house baked Warm Soft Pretzel ($9), and while it's now served with a side of mustard, she requested it served with the welsh rarebit fondue (which it used to always come with!).  The melty cheese stole the show, although the pretzel was perfect- crisp on the outside and doughy on the inside, with that perfect bite that defines a good soft pretzel.  Once the pieces of pretzel disappeared, however, we continued dipping everything ELSE on the table into the cheese. 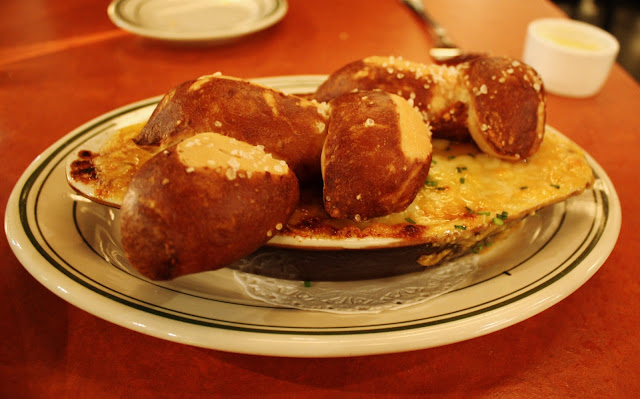 At this point we were all stuffed, but we needed to try at least one of the larger menu items.  J and I decided to split the Roast Pork sandwich, a delicious twist on a Philly classic ($12).  The sandwich is served on a pretzel bun, which is essentially a larger version of the appetizer-- yay, more soft pretzel!  The shredded roast pork is super juicy and flavorful, almost as if cooked in a concentrated broth.  Bitter broccoli rabe and a huge smothering of smoked cheddar (hello, more cheese) made this one of the best pork sandwiches I've ever had-- but probably best eaten when enormously hungry, not after eating almost a half dozen small plates.  The skin-on fried potato wedges were a great alternative to fries, although their outer fried shell was thick as if cooked in oil that was not quite hot enough.  Crispy when they first arrived, as soon as they cooled to the touch, they became a bit soggy. 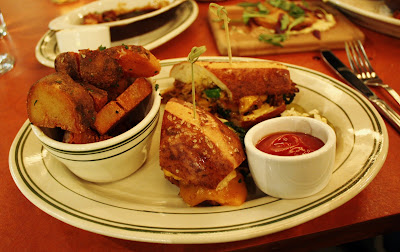 Overall, our meal was a lot of fun.  Stern originally aimed to serve twists on classic Pennsylvanian dishes, both of Philly and Amish styles- and while some of that is still apparent, it definitely has morphed over the few short years it has been open.  A few kitchen snafus and a ho-hum server (she seemed totally over it, and looked bored when we mentioned the impending closing) may have been a sign of the times, but it may also have contributed to the need to close up shop.  We've heard rumors that the space will be snatched up by an enormously famous Philly restauranteur (with the initials of SS?), but nothing solid has been reported yet.

MidAtlantic (since announcing the closing, the website is gone)
3711 Market Street
Posted by A and J at 7:51 PM