Pizza is one of my favorite food groups, and I think it's probably genetic.  Our dad was up in Philly (again) for the weekend, and dinner was a no-brainer when Pitruco announced they were serving up their famous food-truck pizzas during Thursday evening hours (5-8 PM) in the Bella Vista neighborhood.  The weather was perfect for the walk over, and we were excited to find only a few patrons waiting outside the fire engine red trailer. 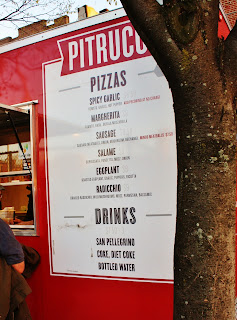 Unfortunately they informed us they were out of two options, the salame and the eggplant- two pizzas we had picked out to order.  I couldn't be too upset- they'd already been open for two hours- and there were other topping combo's that sounded just as appealing. Each pizza is 11"- considered as a single serving- and range in cost from $6.50-$9.  And yes, they take credit cards.

The folks running the truck were incredibly sweet- offering to use a bit of leftover eggplant on one of our selections, chatting with us about the blog, and inviting us to eat our pizzas on the back of the truck.  The trailer is open around the built-in wood-fired brick oven, with a large diamondboard covered platform perfect for perching upon during pizza consumption.


We didn't have to wait long before our pizzas were coming out of the oven.  Since we were eating on-site, the pizzas were served on a circular piece of cardboard, but of course you can get them boxed up to go.  First up was A's choice- the spicy garlic ($6.50).  This was the pie that got the bonus eggplant, but the accumulation of toppings remained simple enough to appreciate each component.  First of all... the crust.  The Pitruco crew definitely works their magic on the dough, creating a fluffy, foldable base rimmed by a bubbly, chewy outer crust.  A few char spots underneath reflect the high temp oven and add a depth of flavor to the powder-y surface. Pizza perfection.

The toppings on this one- roasted cubes of eggplant, sliced garlic, red pepper flakes, and a dollop of the creamiest ricotta I've ever had- complimented the thin smear of slightly sweet tomato sauce.  Seems like they're offering the spicy garlic pizza as a vegan option, but lovers of dairy can deveganize their pie for no additional charge.  We loved the addition of the chunks of softened eggplant scattered across each piece- thanks for hooking us up, Pitruco!

I had originally wanted the eggplant, so I was happy to get my fill from A's pizza.  However, I stayed my course on the veggie train and opted to get the radicchio ($9).  A sauceless pie, this guy appears a little strange due to it's black color.  Bitter shreds of radicchio are mellowed out by a braise with a bit of garlic and tossed in a well-balanced sharp but sweet balsamic syrup.  Roasted mushrooms build on the earthiness of the leafy vegetable, but the combination of mozzarella and shredded parm bring your tastebuds back to familiar pizza territory.  However, if you're not a radicchio fan, avoid this pizza- it's undoubtedly the strongest flavor component.

Our last pizza was the yardstick-of-pizza-excellence- the margherita ($8).  Crust, sauce, rounds of bufala mozzarella and a few pieces of fresh basil- nothing to complicate the basics.  The flavor of the sauce was the most prevalent on this pie- sweet and salty and bursting with sun-ripened tomato-y goodness.  It was nice to experience the pizza in a barebones version- sort of like getting to  know a person once they let all their guards down.

Between the three of us, we ended up carting a single slice home- not quite as good after a couple days in  the fridge, but you can't beat pizza fresh from the oven.  Our dad claimed it was just as good as some of the renditions he consumed in Sicily, and it definitely rivaled the amazing pizza I had in Florence.

We're putting Pitruco on our radar- they claimed they'll be making Thursday evening in Bella Vista a regular part of their rotation.  It seems like their dinner service is a bit slower than the crazed lunch crowds, so we'll continue to target this time in the future.  They have a plethora of social media outlets (Twitter, Facebook, a blog, and a website) to stalk their locations- you can also call ahead to place an order (and snag a salame before they're sold out!)

Pitruco
Follow them on Twitter to see daily specials and locations
Posted by A and J at 9:27 PM