It's been almost a year since I read Mac & Cheese's review of Sushi Planet, but the name- and her review- kept it in the back of my mind all this time.  When a Groupon promoting the little sushi spot popped into my email, I couldn't resist.  Self-advertised as serving the "best budget sushi in Philadelphia," one might be skeptical of its quality.  And, as Taylor pointed out, the name is laughable, and definitely sells itself short- no serious sushi could come out of such a ridiculously titled restaurant, right?  Thankfully this first impression isn't quite accurate. 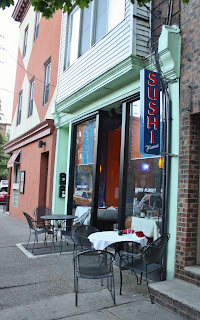 In order to use the Groupon on a weekend, reservations are required, but they weren't hard to score even a day or two in advance.  The restaurant hosts about a dozen tables along with a long sushi bar and a couple outdoor spots, and has... interesting, cheap-y decor.  The servers were all friendly and efficient, and the kitchen works quick- our entire meal only took about an hour.

The kitchen starts you with a little bowl of sweet pickles- thin slices of cucumber in a rice vinegar soup.  Crunchy and a little salty, I really need to make these at home. 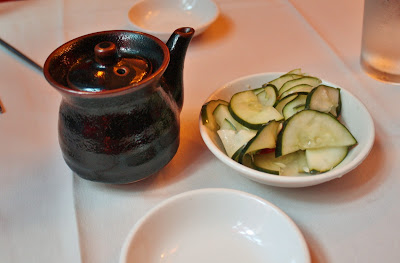 In typical ordering style, we did a little pick-and-choose between the different menu categories.  The menu reads almost like a diner menu, with foods from all types of Asian cuisines, lots of noodle dishes, hot entrees, salads, and of course, a wide range of sushi (both rolls and sashimi).  We started with the Kanni salad, just because I liked the list of ingredients: cucumber, crabstick, avocado, and massago (smelt roe) with a housemade aioli ($6).  The salad was drenched in this mildly spicy mayo-based sauce, which was on the verge of being overwhelming, but the light cucumber sticks and (faux?) crabmeat helped even it out.  The avocado and roe seemed like an afterthought-- they aren't well incorporated into the salad, but I love both of these items so can't complain. 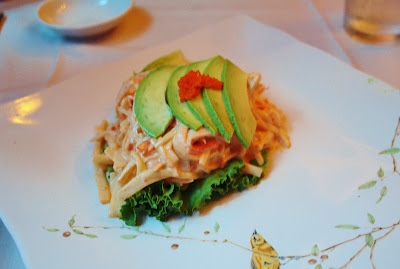 Based on our wonderful experience with Japanese-style eggplant at Sagami, we had to put in an order here as well ($6).  Served in a different manner, but still just as wonderfully buttery and soft as we remembered.  Sushi Planet's version comes with a sweet honey-miso sauce and a tiny sprinkle of sesame seeds for texture, and the lack of any hard-to-cut skin as well as the bite-size chunks make it great for sharing. 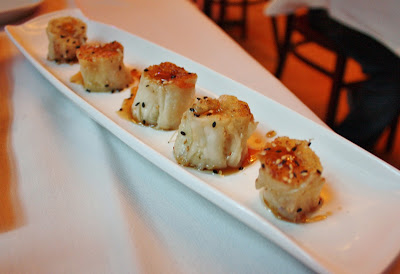 Our third starter was our least favorite bite of the night- the Pork Buns ($7).  We probably should have realized that a Japanese restaurant won't do a Chinese dish justice, but the thought of fluffy meat-filled buns had us hopeful.  The buns are generously portioned, with a large taco-shaped outer "bun" and thick shreds of hoisin-soaked smoked pork.  The hoisin sauce was dominating, leaving a dish of many ingredients quite one-note.  The bun was thick and sticky, and lacked both the flavor and textures we love about classic pork buns.  Oh well, lesson learned! 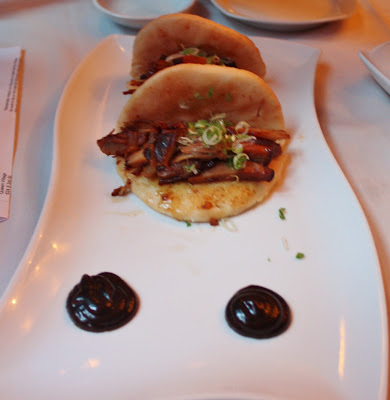 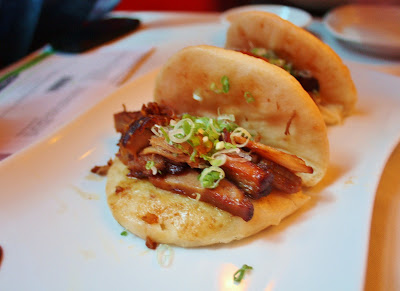 The meal truly began with the arrival of our sushi.  All sushi and sashimi orders come served together on massive platters- the table next to us ordered a bit more and their platter hardly fit on the small two-top.  Looking for a mix of flavors and styles, we ordered three contrasting rolls.

Since Mac & Cheese did a great job of reviewing Sushi Planet's vegetarian options, we had to try one veggie-filled roll, and chose the Mixed Veggie Roll ($6).  We also requested that our Veggie Roll be made with brown rice, but ended up receiving brown rice on all three rolls ($0.50/roll).  The brown rice, while more flavorful and certainly a bit better on the health front, reminded me a LOT of the brown rice used in some of the rolls at... well, Trader Joe's.  While I enjoy TJ's sushi, I'm not sure this comparison is fully a compliment.  That said, I give my full compliment's to the chefs for their perfect construction- we didn't have even a grain of rice crumble off, let alone an entire piece fall apart.

The mix of fillings was a fun way get in some veggies- crispy crunch from the carrot and cucumber (pickled, not raw), and creaminess from the avocado.  A little wasabi and soy sauce and you're good to go. 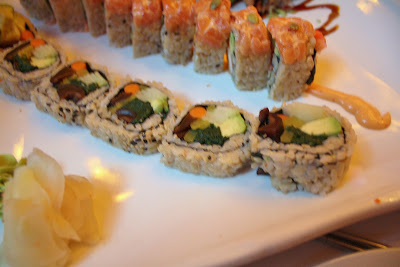 For a bit of spice, we ordered the On Fire Roll, containing eel and avocado and topped with spicy tuna ($10).   Weirdly, this roll was on the opposite side of the spectrum from spicy-- drizzled with a thick, sweet honey-based sauce, there wasn't even a hint of heat.  Some frizzled scallions, bits of crumbled tempura (yum!) and a bit of roe added crunch, but otherwise this roll was pretty tame.  Either the name needs to be changed, or there was a serious mix-up at the sushi counter; it was a decent roll but one that just left us puzzled. 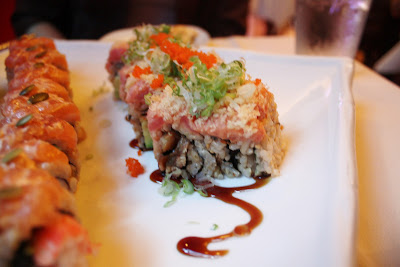 Our final choice was another of Sushi Planet's "House Specials," the Pumpkin Roll ($13.50).  On the higher end of the price scale, this roll is packed with a million ingredients that honestly, I was a little skeptical of.  Avocado, crabstick, and pumpkin tempura fill the middle, while smoked salmon, cinnamon (?!?), "Japanese spices," and pumpkin seeds coat the top.  Thankfully, the flavor combination wasn't over the top (I didn't get even a sniff of cinnamon) and was my favorite of the three we tried.  The smoked salmon and the spicy sauce played a large role (no pun intended), because unfortunately the star ingredient (pumpkin) kind of fell flat.  Pumpkin doesn't have a strong flavor, but the heavy tempura coating was thick and chewy, making each bite texturally unpleasant. 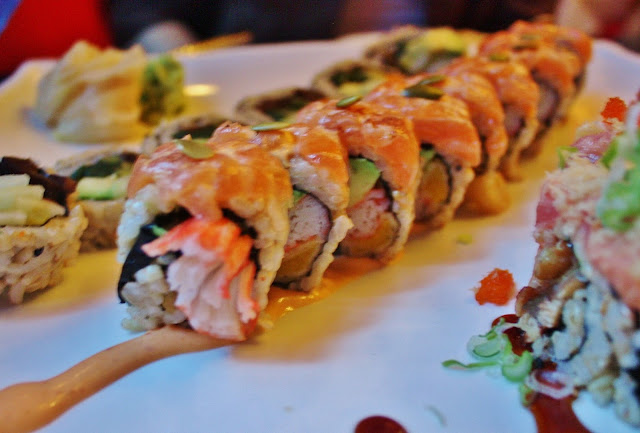 In terms of the sushi, Sushi Planet does a decent job.  The fish is fresh, the rolls are well constructed, and the specialty rolls are certainly different.  However, once again, we remain mostly unimpressed with the sushi in Philly (minus our favorite, Vic's).  Prices were more "mid-range" than "budget," but the availability of seating and its BYO status make this more of a restaurant experience than the standard take-out spot (good for a cheap date).  Also of note, it seemed that almost everyone dining there had a Groupon or other internet-deal, so if you really want the most bang for your buck, keep an eye out for one of these.