Our trip to New York now seems like almost a distant memory, even though it was just a few weeks ago.  The 36 hours we spent in the city had us eating everywhere (including Mario Batali's Eataly, if you missed it!), but the one planned-well-in-advance meal was at The Stanton Social, billed as "New York's Sexiest Restaurant."  J and I were both excited to see how a popular, full-service NY restaurant would compare to what we have here in Philly.

Located in the Lower East Side just south of Houston Street, it actually consists of a tri-level space, with the main dining room occupying the lower level and the mezzanine and top floor housing more of a lounge.  Eating later on a Sunday allowed us some breathing room, but it was still busy, considering.

The menu offers fun riffs on comfort foods from around the world, most of which are served tapas style.  The waitress suggested we each order 2-3 dishes for the table to share, but we were all leaning towards ordering just for ourselves instead (something she seemed surprised to hear-- what, not allowed?).  It was hard to pick just a few, especially with options like their famous French Onion Soup Dumplings and Duck Confit Empanadas (like I said, influence from lots of cultures!). 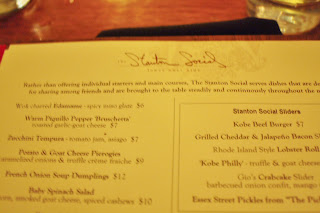 The chef started us out with a small amuse bouche, served in the classic tapas style, emphasizing the group experience.  A small crumbly cracker was topped with a white bean mousse with hints of rosemary, topped with a spray of parmesan curls.  I love a little gratis bite to start the meal, and thought this helped get us excited for the array of flavors and textures we would experience much better than a simple piece of bread would have.

Both sides of the table had to have an order of the Red Snapper Tacos ($10), a combination of chopped flaky fish, jalapeno, mango, and a smear of avocado, all served in a crunchy shell.  Each taco sat in it's own compartment of the dish, atop a pool of a spicy, creamy mayo-based sauce, thick enough to bind to the shell without making it a soggy mess, and giving this dish even more of a "sushi in a taco shell" feel.  A squeeze of lime could also be added, if desired.  This dish was my favorite of the night- a great combination of flavors, although a bit difficult to share between two people. 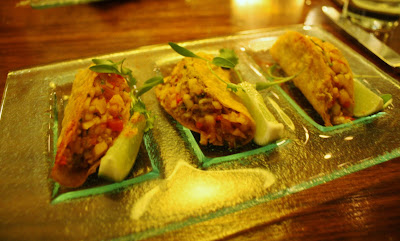 After a day of nonstop eating, I added an order of the Baby Spinach Salad to ensure we ate at least one vegetable ($9).  This salad isn't necessarily super healthy, but it was a great combination of ingredients I would never think to combine on my own.  Soft spinach leaves, spiced cashew crumbles, small clumps of goat cheese and tiny kernels of roasted corn were tossed in a barely-there balsamic-based vinaigrette and a shower of grated Parmesan.  I was definitely scraping up the last bits of balsamic-coated nuts at the bottom of the plate when we were done. 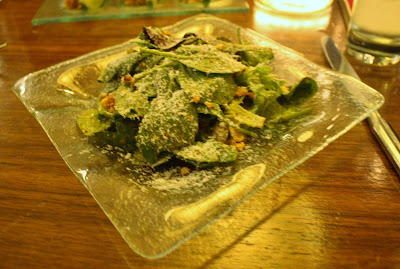 Our table also received two orders of the Chicken Arepas, a miniature version of the Latin dish, each with three perfect tiny bites ($10).  A soft cornmeal cake, a squeeze of avocado mousse, carefully arranged shreds of hand-pulled braised chicken, and a miniature pile of deconstructed salsa perched on top combined every necessary ingredient with ease. 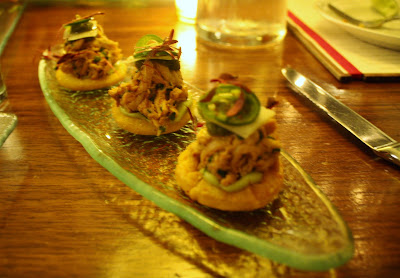 When a menu has pickled ANYTHING on it, I have to order it-- so of course, a bowl of "Essex Street Pickles" had to be done ($4).  I was a little disappointed with them though, as they didn't quite satisfy my cravings for something salty, crunchy, and fresh.  The grape tomatoes were a nice touch, but would have been much better if also pickled. 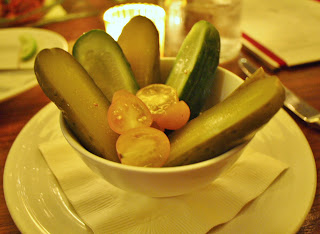 Our final dish needed some prompting of our waitress- I don't know whether the kitchen forgot or whether she never got it on the ticket, but we're glad we made the second effort to try the Artichoke Fritters ($7).  I have no idea how something with such a high water content gets made into a tiny ball of fried dough, but they worked their magic and made it happen, with delicious results- light and tangy, with a combination of the sweet artichokes and a hit of fresh lemon. 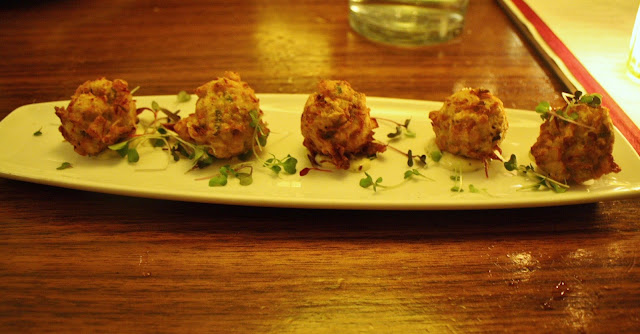 Dessert was a must, as Stanton Social has a mouthwatering list of options.  I'm a sticky toffee pudding fiend, so convinced J to split Stanton's Irish-inspired version, which is spiked with Guinness, adding even more chocolate-y flavor, and topped with an irish cream gelato (think extra-extra-vanilla) ($8).  The caramel sauce, the key to the "sticky," was addicting- overall, a fun but relatively standard version of one of my favorite desserts. 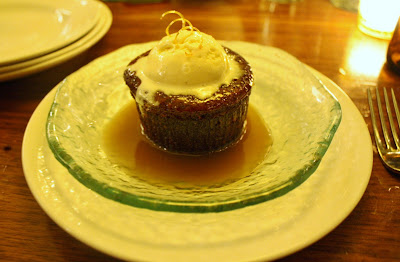 Our friends ordered their famous Warm Doughnuts, a pile of fluffy, sugar-coated, slightly-larger-than-hole-sized doughnuts served with three super sauces- salted caramel, raspberry, and dark chocolate ($9).  Give me these three sauces on some plain vanilla ice cream any day- doughnuts aren't my thing- but no bite went uneaten. 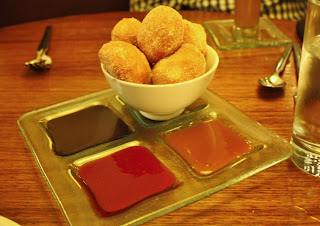 Spending dinner with two of our favorite people in a city we're all experiencing together is priceless, and Stanton Social didn't disappoint in terms of food.  I'm really not sure what makes the restaurant sexy, let alone the sexiest, so I was a bit disappointed in the general atmosphere- it seemed like just a regular restaurant to me.  On any other day, this would be nothing to think twice about, but I do think Stanton tries to sell themselves as something they might not be.  A fun place to eat some fun food, sure, but if this is what New York wants to pride themselves on, Philly is keeping pace without breaking a sweat.

Stanton Social
New York City, NY
Posted by A and J at 5:02 PM