Last time we were down in Queen Village, chowing down on pork-every-way at Cochon, its newest neighbor, Ulivo, was about to open up shop.  Craig LaBan quickly gave the Italian BYO his seal of approval, particularly noting its great value (read: great food for less $$).  A free Saturday evening with promise of great weather gave us a good excuse to walk down and check it out for ourselves. 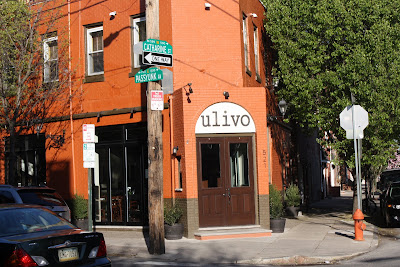 We had early reservations, so the place was quiet when we arrived.  Rows of full-length windows meant tons of sun pouring in, making it challenging for our waitress to seat us in a glare-free area.  We appreciated the spacing between the tables- they aren't trying to pack diners in like sardines.  Our waitress was cheerful and friendly, and the dishes came out of the kitchen in a timely manner.  Out first were a few pieces of warm, fluffy focaccia served with a bit of olive oil for dipping.  A sprinkle of coarse salt and the characteristic dimpled surface- a reflection of the reserved sophistication that the rest of our meal embodied.  Am I gushing already?? 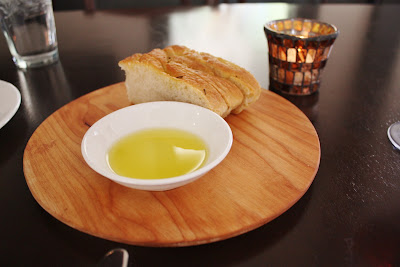 The list of appetizers is succinct but contains the usual suspects- a soup, a couple of salads, cheese & meat plates.  The grilled octopus was an eye-catcher, though at $14 is as pricey as a pasta dish.  Thankfully, Ulivo  lived up to its reputation- the dish was well worth the money.  Tender chunks of buttery white meat bore the purple-tentacled surface that makes this protein such a textural treat.  Firm brown borlotti beans (new to me but similar to a pinto bean), crunchy pickled red peppers and slivers of onions, a few leaves of spicy arugula, and a light citrus-y olive oil dressing were the perfect companions to the octopus- nothing to steal the spotlight. 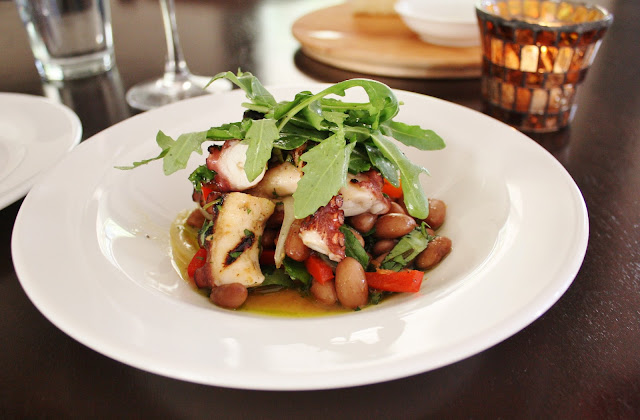 Our waitress informed us that any pasta dish could be served as a half-order, making our decision making process a bit easier.  A picked out the ricotta gnocchi ($9.50), a dish that LaBan had raved about.  We enjoy making our own gnocchi, so its easy to appreciate the time and effort that goes into creating the little dough-y pillows.  In this case, the gnocchi gave the impression that they were made entirely from cheese- the definition of melt-in-your-mouth.  A pool of black truffle butter and thin curls of salty Pecorino only heightened the luxurious experience, and caused an almost immediate declaration that these were the best gnocchi we had ever consumed. 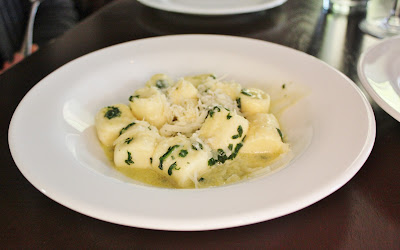 I opted to try the tonnarelli- a more rustic pasta dish served simply with bits of guanciale, spring garlic, and calabrian chilis ($8).  Similar to spaghetti, the al dente noodles were lightly tossed in olive oil and a bit of salt and pepper.  I made the mistake of trying to transfer some of the dish to my "sharing plate"- most of the slippery strands ended up on the table.  I resorted to picking out bits of salty guanciale and the shaved garlic (similar to ramps?) to eat alongside a twirl of the slightly chewy pasta.  I was hoping for a bit more spice from the chilis, but overall it was a light dish perfect for spring, simple and fresh. 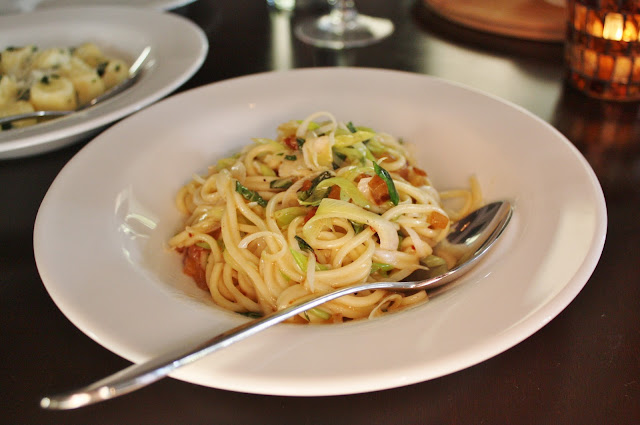 Although the salmon with cara-cara oranges sounded terrific, A insisted we try the braised chicken ($19) as it is served with fried artichokes- apparently her latest obsession. Crispy brown skin hid a meaty leg and thigh oozing plenty of salty (brined?) dark meat flavor.  Thanks to the braise, the meat easily fell away from the bone, making it effortless to fork off pieces and scoop up a bit of a thick, herb-heavy salsa verde.  A pile of grainy polenta soaked up juice from the chicken and coated the crispy fried artichokes.  The 'chokes themselves didn't have a significant flavor contribution- they really needed to be eaten alone in order to be fully appreciated.  A little salad of raw fennel and arugula kept things light- sort of a jumble of ingredients, but a joy to eat. 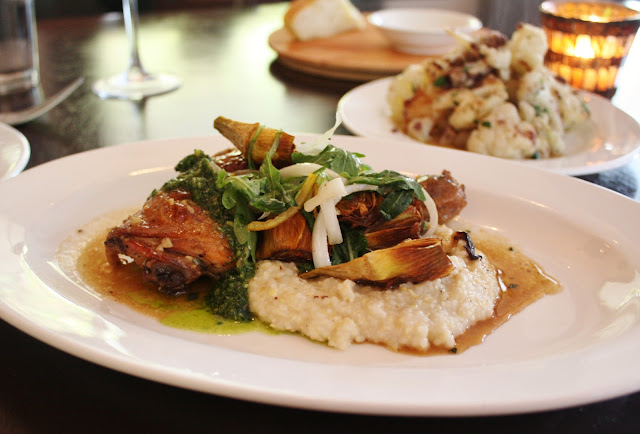 We appeased the veggie police with a side order of roasted cauliflower ($6).  We're a big fan of roasting anything cruciferous- reducing any harshness and providing a softer texture.  This version introduced a salty component in the form of mashed kalamata olives- a fun replacement for the usual sprinkle of sea salt.  A solid side dish. 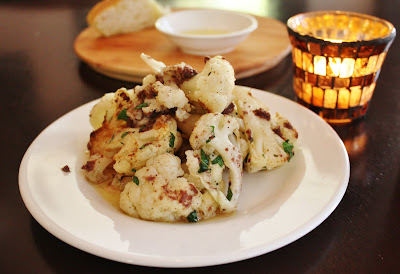 I clearly haven't said a single negative thing about our dining experience- it was simply a flawless meal.  We declined dessert (the horror!) as we had plans for later that evening, but it gives us a good excuse to return sooner rather than later.  Other reviewers mentioned issues with long waits and noise levels, but we avoided both by dining a bit earlier.  For those who live near the intersection of Catharine and Passyunk, I am now twice as jealous of the two fantastic restaurants you have right outside your door.