Pretty much every single time we are planning a meal out we tick off a short (or sometimes long) list of criteria. Good for groups? Takes reservations? Offers healthy options? Close to home/a coinciding event/a subway stop?  We hope this isn't just us-- it is sometimes super difficult to find a place that fits all our needs (particularly when we're trying to find something new to blog too!).  Planning for a brunch after a Sunday morning race, we needed: someplace near Manayunk/Roxborough, affordable, and without a long wait. Some perusal of Yelp brought up The Urban Cafe- almost immediately adjacent to the Wissahickon train station- and after a year of using this station regularly, I still had never heard of it. 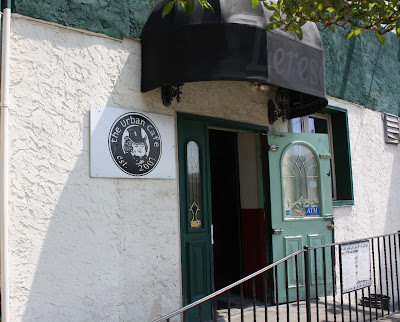 The Urban Cafe is open daily for dinner, but also serves Sunday brunch.  It's almost secret location above T. Hogan's Pub (literally, you walk into a bar and then head up to the restaurant) has kept this somewhat of a hidden gem, at least at brunchtime.  The space is split in two by a low dividing wall, with couches, chairs, and a big group table on one side, and a half dozen smaller dining tables on the other.  The furniture screamed "recycled, outdated hotel conference room" to me, but we weren't there for the atmosphere-- just the food! 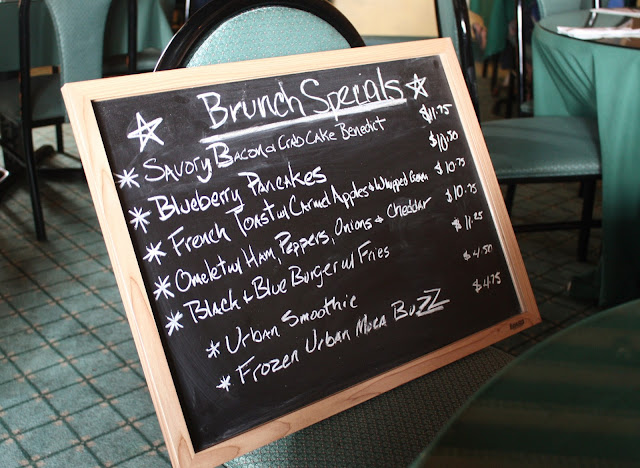 The majority of the work was being done by a single waiter, who was clearing tables, taking orders, printing out checks, acting as host AND bringing out the food.. rather impressive, even though there were only eleven guests eating while we were there (including us).  He brought us menus and the specials board for our own personal viewing- an interesting mix of options, with good coverage of both sweet and savory, all with a touch of Southern influence. 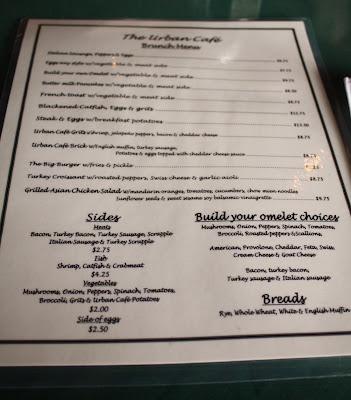 After a long, hard race I was craving something big and salty, so the Urban Cafe Grits seemed like the best option ($8.75).  An enormous bowl filled with some of the creamiest grits I've ever had couldn't have hit the spot better- so incredibly cheesy, and studded with bits of shrimp, bacon, and finely chopped jalapenos.  The peppers brought some heat, but I asked for some hot sauce to kick it up a notch.  "Milder" green jalapeno based Tabasco was brought my way- a little disappointed it wasn't Frank's, but it was the perfect spicy-salty match. 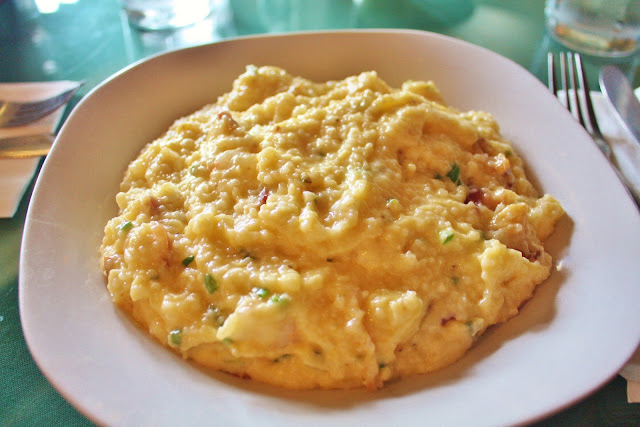 Obviously one dish wasn't going to cut it, so I also ordered a side of Urban Cafe Potatoes (apparently I needed to order all of their namesake dishes) ($2).  A small plate of soft yet crispy cubes, with bits of toasted skin was intended for the table to split, but I think I demolished these solo. 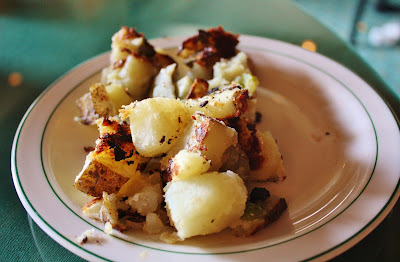 The specials menu called to the other two in the group, and with a bit of prompting from me, J ordered the Crab Cakes Benedict ($11.75).  Two generous crab cakes were topped with perfectly runny poached eggs and a pour of hollandaise sauce.  A literal sheet of crispy bacon hid beneath the eggs, lending a salty touch in every bite.  We really enjoyed the non-traditional take on a classic dish, using the crab cakes instead of a typical English muffin.  The cakes still soaked up the egg yolk as the muffin would, but gave a great punch of flavor and textural interest where a muffin would not. 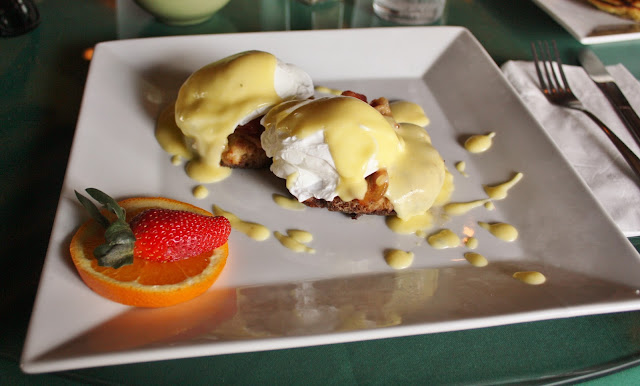 The hollandaise was also creamy perfection- not too runny but a little drippier than normal, which allowed for an even spread.  Overall, a perfectly executed dish. 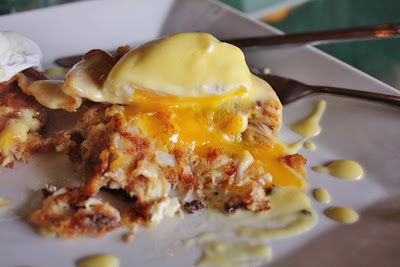 I think I once mentioned that my fiance lives on pulled pork sandwiches and burgers, but I failed to mention that he does throw pancakes into the mix for breakfast.  The blueberry pancake special couldn't escape him, and it should be at the top of any pancake connoisseur's list (those exist, right?).  Three enormous fluffy cakes filled with fresh blueberries are cooked so that they're slightly crisp on the outside but soft and airy on the inside ($10.50).  A bottom view of these 'cakes would show at least 50% blueberry coverage.  A side of meat is included, and options vary from various sausages, bacon, and even two versions of scrapple.  The bacon strips seemed measly in comparison to the monstrous pancakes, but you can't argue with free. 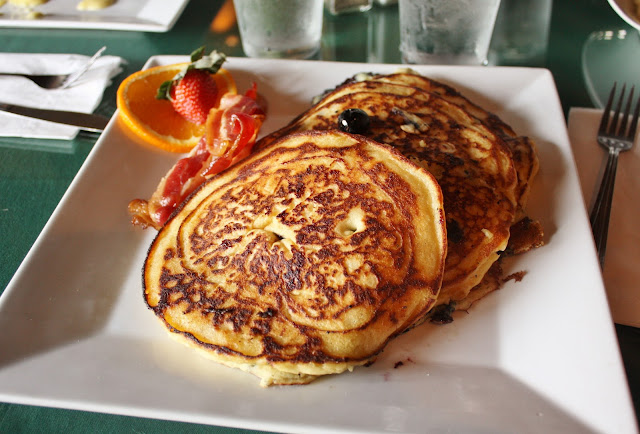 The quiet atmosphere, the sunlight streaming in, and our friendly server made the experience enjoyable even beyond the delicious food.  I'm kind of itching to check it out for dinner, too.  The prices are extremely reasonable, particularly for the quality of the food and the size of the portions- it's kind of like a quiet, no-wait Sabrina's.  If you're a Center City dweller without a car, the ride out to Manayunk couldn't be easier (just hop on the Norristown-bound train), and you'll be just steps away from a new go-to brunch spot!