The Monday after our wedding, my new husband and I set off on our honeymoon for a week in Jamaica.  We flew into Montego Bay and trekked east across the island to Ocho Rios to our final destination: Couples Tower Isle.  It was a perfect resort for us: just the right mix of all-inclusive activities and plenty of rest and relaxation.  One of our favorite things about "CTI" as it's known, was the food.  We never had a less than stellar meal, but some of our favorites were held at one of the on-site restaurants, Eight Rivers.  Requiring "reservations" (which, at far below resort capacity, were easy to score day of) as well as a bit of sprucing up (semi-formal dress preferred), it felt like a such a luxury to dine here. 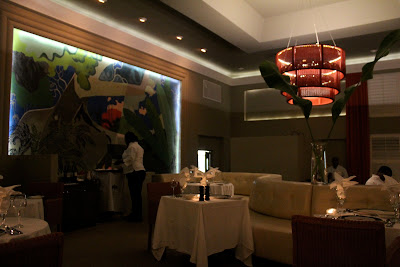 Our first visit to the restaurant was on our first full day at the resort (the earliest we could go!).  They keep the restaurant at about 25% capacity throughout the evening, which keeps service at a maximum and noise at a minimum.  We were seated next to each other at a four person table, which was rather romantic.  Literally everything is included in your stay, so we technically could have ordered two of everything on the menu- for no extra charge. 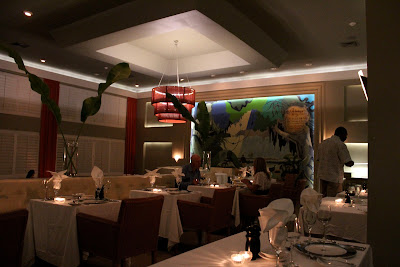 The menu breaks up your meal into a potential five courses- appetizers, soup, salad, entree, and dessert.  Bread service is also offered at the beginning of the meal, with a variety of different small rolls to choose from- the earthy spinach was my favorite. 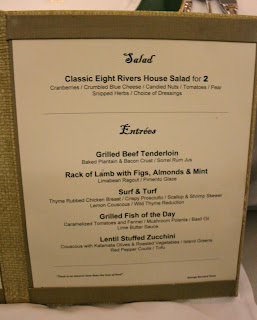 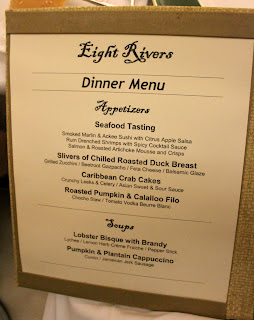 Since 1) we were in the Caribbean and 2) prices were clearly not an issue, I tried to eat my way through as much seafood as possible during our stay.  I began my first meal at Eight Rivers with the Caribbean Crab Cakes, two small breaded cakes served atop softened vegetables and a small pool of sweet and sour sauce.  The portion sizes for the appetizers were perfect- just enough to get a taste without filling up. 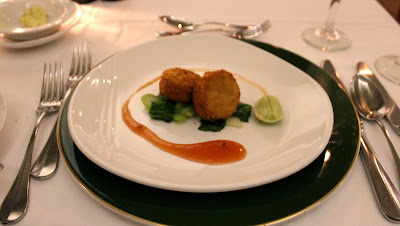 Of course, the Seafood Tasting Trio was calling our name as well, so we decided to split it.  The long plantain chip was served directly in a dish of smoked salmon and roasted artichoke mousse- a perfect, easy-to-eat pairing.  The resort served a lot of smoked salmon and smoked marlin, and we ate more than our fair share by the end of the week.  The "sushi" went straight to me, even though I know my husband would have liked it-- it may have looked like sushi, but was really just smoked salmon and ackee (a native fruit) rolled up in rice, and served with a citrus infused apple slaw.  Finally, a single shrimp in a sweet and spicy cocktail sauce completed the trio. 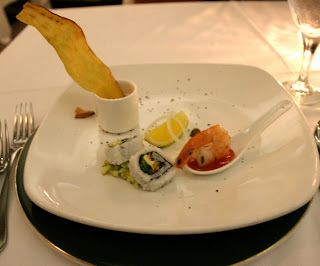 The entrees were considerably larger, but always provided a plate that gave equal weight to meat, veggies, and a grain/starch.  The Grilled Beef Tenderloin was my husband's favorite dish of the entire week- a perfectly prepared cut of meat "crusted" with a mash of sweet plantains and bacon.  Creamy mashed red-skin potatoes and a sauteed vegetable mix in a sweet sorrel rum and butter sauce completed the meal. 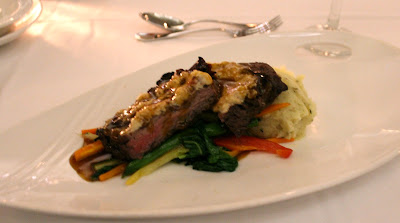 Sticking with Operation Eat the Sea, I went with the Grilled Fish of the Day- a flaky, sweet red snapper (the most commonly served fish at the resort).  With a touch of peppery crust from the grill and a lime butter sauce, I could easily have eaten this at every meal.  Some softened sauteed leeks and tomatoes, as well as carrots and green beans, satisfied the vegetable rainbow, and a triangle of basil infused fried mushroom and polenta cake was an odd but very enjoyable side. 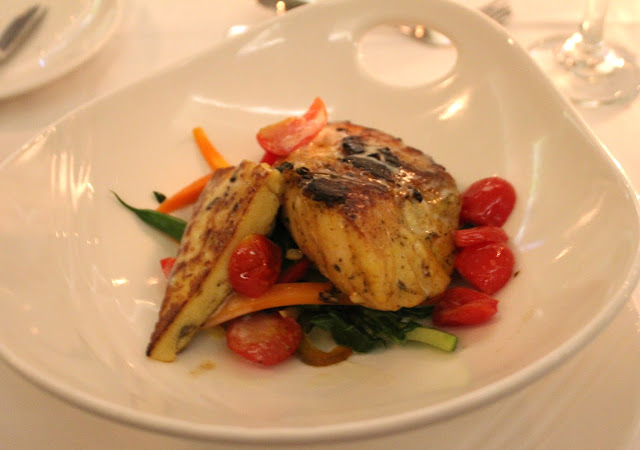 The dessert menu (which we didn't photograph on this first evening) was heavy on the dairy, so we both inadvertently ordered the same thing (I married an unfortunate lactose intolerant), a ginger-pear creme brulee.  The resort actually offered creme brulee several times on the "regular" lunch and dinner dessert buffet, so it seems to be a specialty.  This one was just as advertised- delicious, with the ginger countering the sweetness with a bit of spice. 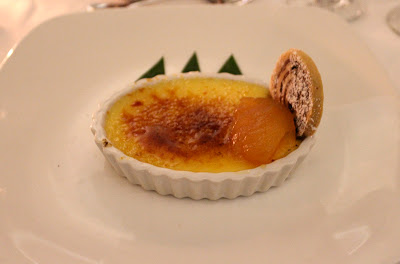 At each of the four Couples resorts (all in Jamaica), Friday night is "Lobster Night," with lobster tails offered at all resort restaurants during the lobster season.  Thankfully, we were in season, and decided to return to Eight Rivers as we thought they would have the best lobster (although, in hindsight, it's probably just as good at all the restaurants!). 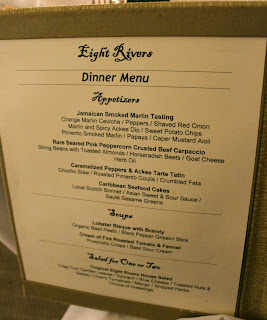 We were actually a bit confused, as we didn't see lobster on the menu at all!  AND, we were surprised to see an all new menu- apparently they switch menus halfway through the week so that guests who dine twice will likely be able to try something new.  However, our server listed the lobster as a special entree for the evening when delivering bread service and taking the beverage order.  Since the menu was new, we decided to conquer the regular entrees and ordered lobster tails on the side (genius move, right?).

The Smoked Marlin Sampler was even better than the Seafood Sampler, mostly because we had become super obsessed with smoked marlin at this point in our trip.  The infamous smoked marlin dip with plaintain chips, a thick roll of smoked marlin around a chunk of sweet canteloupe, and an interesting smoked marlin "ceviche"- with hardly a hint of citrus. 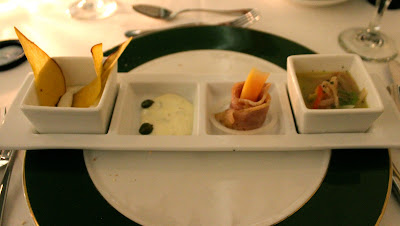 The beef carpaccio with roasted beet chip and goat cheese-green bean salad was both lovely to look at and to eat, although the "carpaccio" was actually fairly thick strips of seared beef. 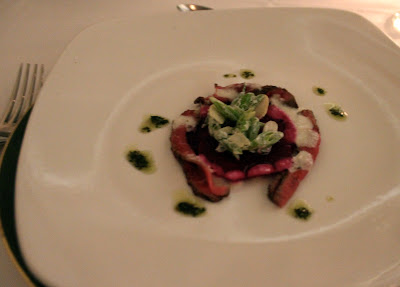 The rest of our meal was similar to our first night, with slightly different preparations: steak for the man, seafood for the lady.

The star of the show was shared between us- two grilled lobster tails drenched in a small pool of garlic-butter sauce.  I have very little experience with lobster, but these tails were FAT.  Not as soft of meat as I expected, and with a flavor profile similar to a mash-up of scallops and shrimp.  Several large mouthfuls of meat were consumed all on their own-- I'm glad we went this route so that the lobster could shine alone.  Definitely a treat! 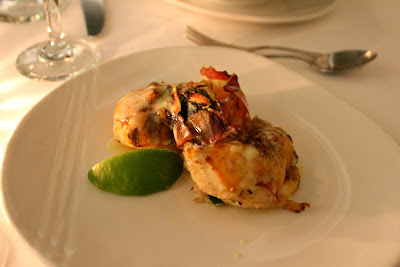 The dessert menu on our second trip was also different from our first visit, and held two necessary options. 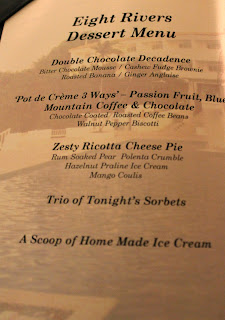 The Pot de Creme "Three Ways" was the best dessert we consumed all week- seemingly simple, but it packed an extreme amount of flavor into a single plate.  The chocolate creme was super rich, with a flavor reminiscent of the chocolate pudding we enjoyed at Supper just days earlier.  The passion fruit was love at first bite, mostly because I'm obsessed with passion fruit, but also because the texture was like a light, airy cheesecake.  However, I left most of it for my honeymoon partner after I tasted the coffee creme- I always forget how much I like coffee desserts.  Topped with crunchy, roasted coffee beans, it was like drinking the best cup of coffee you've ever had-- in food form. 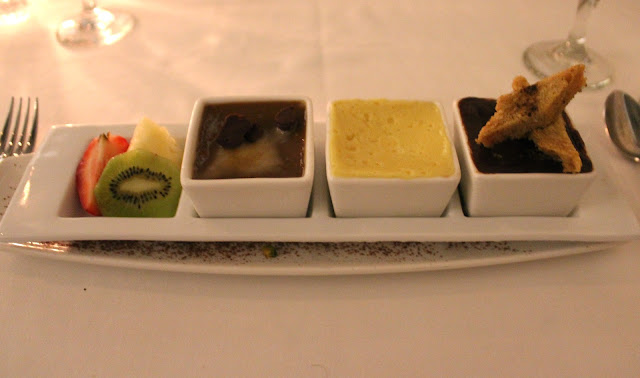 While my "Double Chocolate Decadence" certainly didn't disappoint, it couldn't really stand up to the passion fruit and coffee cremes.  The dark chocolate mousse was similar to the chocolate creme, but with a much fluffier texture.  A thin, crumbly cashew brownie served as a good base and was well matched with a soft, roasted banana topping. 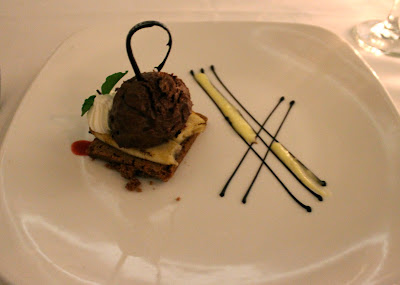 Our first two meals were so memorable that we decided we had to return to Eight Rivers for our last night at the resort.  It was bittersweet, but I'm so glad we did so- even if it meant skipping dinner at one of the resort restaurants altogether (next time!).  We received the same menu as our second visit (they were only two days apart), sans lobster of course.

Of course, there was more salmon and shrimp and a shared Pot de Cremes dessert- the best end to the meal!  Our three meals here were my favorites of the week- quiet and elegant, it was like dining at a five star restaurant, complete with efficient, quality service and multiple, well timed courses.  Espresso, coffee, and organic teas were offered with dessert, as well as any other drink you could ever want- and the best part, when you were done, no need to ask for the check!  We can't wait to return to Tower Isle and Eight Rivers for future vacations and celebrations.
Posted by A and J at 9:15 PM