Earlier this year, several food writers (both local and national) made some predictions about the food trends we would experience in 2012.  One of those focused on specialty desserts: cupcakes were on the way out, and PIE was on the way in.  In my opinion, cupcakes are great, and while you can formulate a million different flavor combinations, at the end of the day, they're still cake.  Pie, on the other hand, seems like much more of a special treat.  So, apologies to all the stores that sell cupcakes, but we might start passing you up in favor of dessert at the newly opened Magpie. 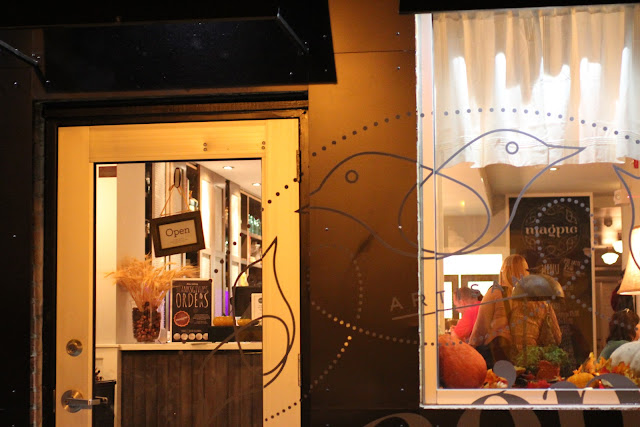 It won't be too difficult, because Magpie is just an easy five minute walk from my house- dangerous!  Located on the continuously booming, up-and-coming South Street West, the outside of the shop is fun just to look at, with a huge bird etching across the entire storefront.  A couple of two-tops sit on the sidewalk, but the inside of the shop is more inviting- small but brightly lit, with cozy cushioned booths, a few small tables, and a long counter (eating pie at a counter is sort of classic America, no?).  On my first visit, I gathered a couple friends to sample some pie with me- the tiny shop offers just a handful of flavors on weekdays, with a couple additional specialty pies on the weekends, and flavors rotate seasonally.

On our visit, we had the choice of two "Fruits," three "Custards," and two "Savory" pies- but since we were there for the sweets, we opted for a few slices of the former options.  Based on what my friends ordered (and what the husband at home requested), I ended up with the Praline Streusel Pumpkin ($5) with optional whipped cream- on the side please!  The pies are served cold, which was fine by me, but seems to be a common complaint on Yelp.  The pie was mostly quintessential Thanksgiving dessert- a flaky, buttery crust, and a creamy spiced pumpkin custard.  The slice was just the right size- I could easily finish it myself but didn't feel skimped.  The price point is slightly high, but I'd definitely pay more for dessert at a restaurant!  A pecan streusel topping definitely took it up a few notches, adding great texture to the otherwise simple pie. 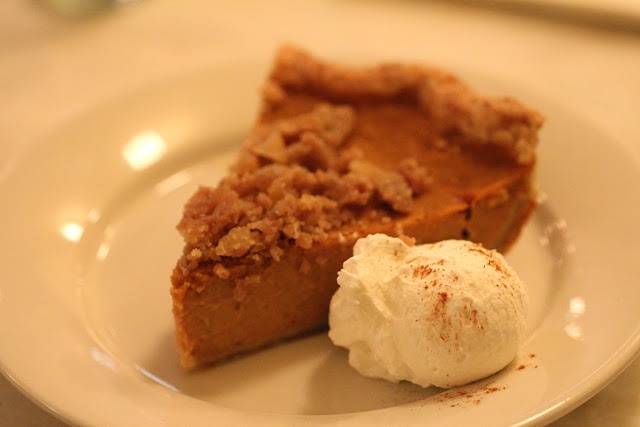 The fruit pies are not your typical pies for several reasons- most importantly, they aren't round.  Both the pear and apple options are made in large, rectangular deep dishes, and the slices reflect this in the same shape.  For a mere $0.50 more than a slice of custard-based pie, you get an enormous serving of the fruit pies.  Unless you're planning on skipping your next meal or two, plan to split this with a friend (or three).  The Pear Ginger Oatmeal Crumb sounded a little bit... boring to me, but one glimpse changed my mind- look at those fat, sugary crumbs!  Here, the outer crust (normally my favorite part) takes a backseat to the crunchy oatmeal topping and the packed-to-the-brim stack of sweet, ginger-spiced pear slices.  I don't typically jump at fruit based desserts, but this was perfect. 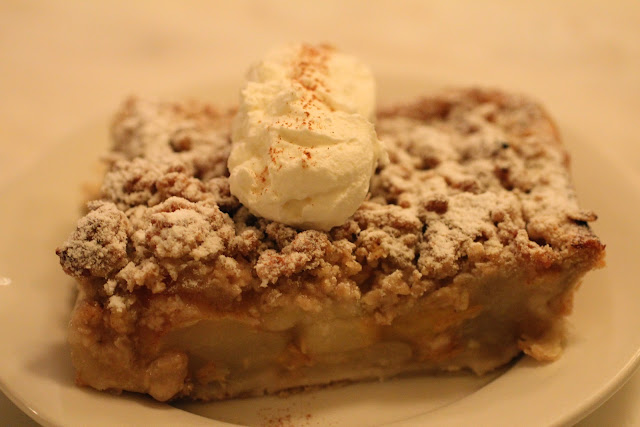 The Chocolate Cinnamon Coffee Pecan (wow, what a name!) was another favorite, but in a unique and pushing-pie-boundaries way ($5).  There were so many components, each lending a different quality which together all made a darn good piece of pie.  The outer crust extended over the pie, but was thin and crackly in an almost toffee-like texture.  A layer of pecans lies directly underneath, providing a sense of familiarity, while the thick layer of sticky custard brought a chocolate explosion with subtle hints of cinnamon and coffee.  For those of you who think pie is just the same old holiday dessert, try this one. 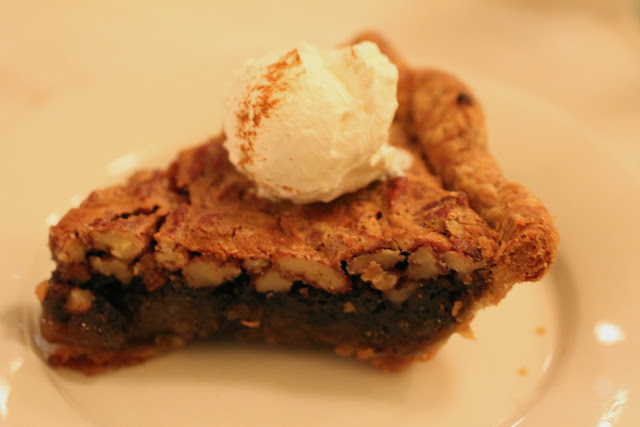 I told my husband I'd bring him home half of my slice, but we quickly realized that wouldn't work since he is an apple pie afficionado and it's not my go-to (I'm glad we had this talk before my visit, since there's no way I would have been able to stop at a half slice of pumpkin!).  The words "Buttery" and "Caramel" in this pie name should have warned me though- this is not your grandmother's apple pie.  The apple filling itself was epic- thick sliced apples in just enough caramel sauce to hold everything together- again, they certainly didn't skimp on the fruit! 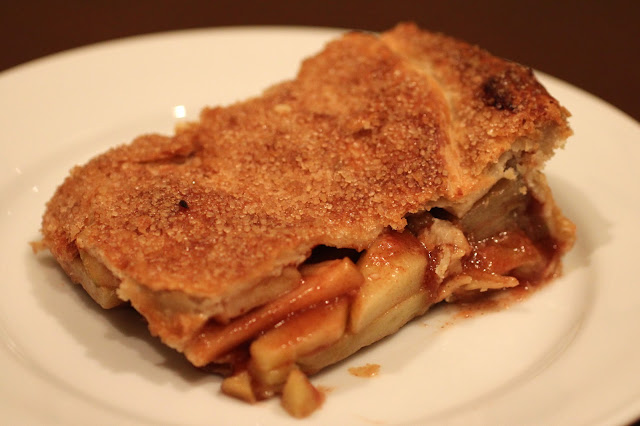 I could eat this fruit filling on top of ice cream, or pancakes, or just on its own- it's phenomenal.  The top crust was thin, but the thick sprinkle of sugar and cinnamon provided a crunchy exterior and an little extra spice (I don't love a lot of cinnamon, so this was perfect).  The edge crust was thin, which in most cases would leave me sad, but the pie itself was so good I literally forgot that this is typically my favorite part. 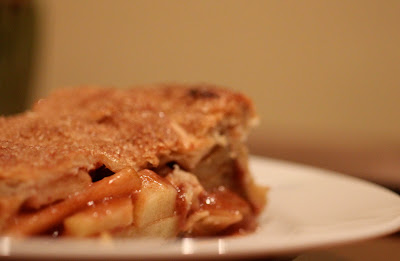 Again, the pie slice was extremely generous, allowing us to snack on this for several consecutive nights- definitely well-worth its price point.  My friend wrapped up a slice of the Butterscotch Bourbon for her husband and reported that he gave it his full approval after "wolfing it down."  So that makes it official- every single sweet option at Magpie is a winner.  I'm definitely interested in returning for the savory options as well- the Butternut Gouda is for sure calling my name.  I would have to follow it up with a slice of the Chocolate Pecan.. or maybe the Ginger Pear?  I'm glad they don't have more options, or it could potentially be a serious source of stress to choose just one!