When we're planning our meals for the week, we often use the internet (food blogs!) as inspiration for meals. Last week, we chose a recipe, "Pumpkin and Feta Fritters." (http://closetcooking.blogspot.com/) Due to a few planned and unplanned bumps in the road, we ended up with something similar but with a twist. Most importantly, the main two ingredients are different! A whole, fresh squash is required, and after Halloween it's pretty difficult to find a fresh pumpkin. We decided to just use a butternut squash-- it's similar in flavor and color, right? The butternut squash selection at our local produce shop was sparse, so we grabbed a replacement- unknowingly to us, a kombucha squash (also called a kobucha?) Then, a trip to Trader Joe's on a Sunday afternoon (never a good idea) failed to turn up feta cheese- they're always out of something you need. Improvisation time! We chose crumbled Gorgonzola instead- totally different flavor, but similar texture to feta. 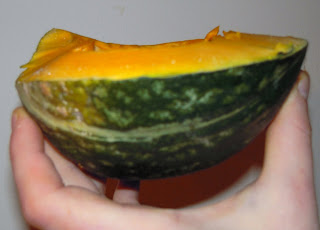 After keeping this recipe in the back of my mind all week, the decision was made to forget the Gorgonzola and instead use another cheese we had in our fridge-- shredded Parmesan. The flavor of feta is fairly subtle-- really, it would just add a considerable amount of salt to the fritters. Same deal with Parmesan (this wasn't top of the line Parm, just a tub from TJs). The outcome was superb; crispy potato-pancake-like-fritters that sort of melted in your mouth but were solid enough to pick up (forks and knives are often ignored in our house).

Unfortunately, these fritters do take a good bit of work (and "elbow grease" as our mom would say). The squash had to be cut in half, de-seeded, peeled, and grated. I think a few bits of knuckle ended up in the mix. I also think I got a pretty good bicep workout. Into a big bowl went: 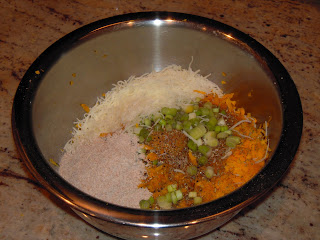 One note- spices and such are never measured around here. So this is our best estimate! We have a decent eye for these things so if this recipe is followed it would probably end up just like ours. Gave it all a good mix by scrunching it all with my hands, heated a few turns of olive oil in a pan, and formed some loose patties. Laid them into the pan, patted them down to get even thickness, and forgot about them for 5-6 minutes (good time to play "speed cleanup" and see how much of the kitchen can be cleaned prior to eating). They should be crispy and brown when you flip them- if they're difficult to flip, they're either not ready or you didn't use enough oil (its crucial to achieve optimal crispiness). Fry them for another 5-6 minutes on the other side and voila. Squash fritters. 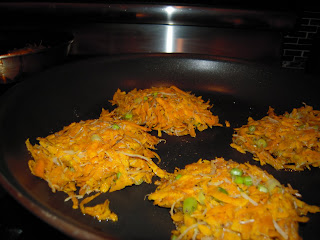 If you're adventurous enough to try sweet potato pancakes, this is fairly similar-- and healthier. Squash is one of our fave veggies- very versatile and not too heavy. These tasted "like pumpkin pie without the sugar" says J, although I think they are a good bit more savory-- the cheese isn't overwhelming but provides a nice salty bite, and the green onions add to effect. The darker the crust the better, in our opinion- easier to pick up, and a better contrast of crispy outside and soft inside. You could modify this recipe (as we did!) with a variety of different squashes (just make sure its one without too much water-- using zucchini or the like would require more flour) and different cheeses. 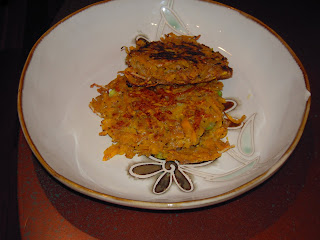 We served these up with a big salad of mixed greens, granny smith apple chunks, the previously mentioned Gorgonzola, and walnuts with a poppyseed dressing. It was good balance of sweet to the savory fritters.
Posted by Julianne at 8:15 PM