A & I, as Philadelphia citizens (well, not legally- we still have Florida drivers license's...) have been very exposed to the Philly Food God that is Jose Garces. Even though he's become a little bit "overdone" (a little too commercialized, ie Stephen Starr), we still are fully aware of his amazing capability to put together restaurants with great atmostpheres, great food, great service- overall terrific eating experiences. We've eaten at Amada, Distrito, Whiskey Village, and Tinto with mostly positive comments on all the of the above. So when the concept for Garces Trading Co. was announced, we were certainly intrigued- essentially a compilation of Garces' favorite tidbits from each of his Philly restaurants. Opening early this week, GTC's location adjacent to my place of work/study gave me a chance to peek in on the walk home. The general sense of livelihood inspired me to drag A along for dinner (I didn't exactly need to ask her more than once).

The old space was a mixture of a sit-down cafe as well as offering takeout options, and Garces carried on with this idea. The renovations were very simple, but the use of the floor space was really maximized. The edges of the room were fitted with coolers & counters for selling cheese, meats, pastries, and breads, as well as sandwiches, pastas and other to-go options. There is also a small and separate room stocked with wines from Spain, Italy & France which can be purchased as a sort of on-location BYOB (our waiter told us they were averaging two bottles per table from this selection). The center of the restaurant has a variety of tables- bar height as well as small booths and long tables shared by multiple parties. It might seem a bit awkward to share a table with another group, but we weren't closely packed and it created a friendly atmosphere. 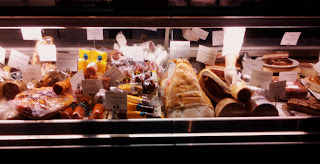 *Please excuse photo quality, we were in a hurry and forgot the camera, so these are compliments of a Blackberry

We arrived about 7:30 and were told we had a 30 minutes wait, which was the perfect amount of time to peruse the rest of the store. The highlight is certainly the "oil & vinegar bar"- a 20 foot span of large stainless containers with taps of a variety of high quality oils (white truffle oil? cinnamon pear balsamic? yes please!!) as well as boxes full of bits of bread for dipping. A & I are unsure how long this will last, as it seems like a money-loser- there was certainly no policing- I could have sat and eaten tablespoon after tablespoon of oil costing over $30 a bottle (and I wanted to, trust me). We also saw Garces himself working behind the meat counter, checking on orders and talking with customers and other chefs. 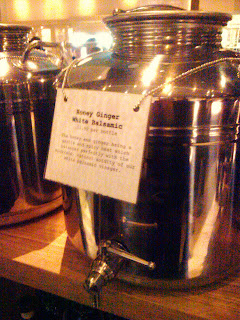 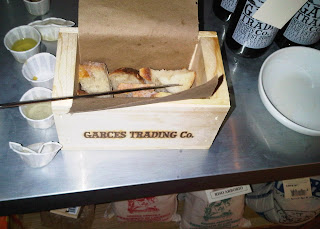 When we were eventually seated, the service was terrific. Our waiter was friendly, answered all our questions, and the food came out with plenty of time to enjoy each item without a rush. When asked whether we had any questions, A replied "Yes, actually... Can we just get one of everything?" Without a beat, our waiter responded "Would you like me to course that out, or bring it all at once?" We decided to start out with the Chef's Selection of cheeses- 3 cheeses with 3 accompaniments ($15 with individual cheese selections priced at $6 and accompaniments $1 each). The plate arrived with an excellent mix of tastes and textures- manchego, Fourme d'Ambert (a very mild blue), and fontina. The accompaniments were roasted garlic dulce de leche, onion pecan butter, and a honey with plump golden raisins, all served up on a cool grey slate. The collective favorite cheese was the blue- it had none of the bitter moldy flavor that most sharp blue cheeses possess- it was mostly salty and earthy. I personally love a good manchego, and this one did not disappoint. The fontina was also good.. until I smelled it. We decided it smelled like lab bacteria.. so if you know what E. coli growing in LB broth smells like... yeah, not totally pleasant. However, the texture was firm and smooth, so a good smother of onion pecan butter made it a mouth full of joy. The accompaniments were terrific- most notably the garlic dulce de leche. With the color and texture of caramel, but the taste of roasted garlic... points for both original, interesting, and tasty. 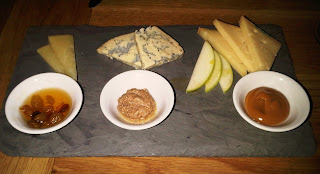 *Cheese portions actually a bit larger, we preemptively dove in before snapping a pic

We also ordered an antipasto of the baby artichokes ($7). I have an obsession with artichoke hearts, but these were really nothing like your usual artichoke hearts out of a jar. These artichokes were very firm, almost to the point of being crisp, which was probably enhanced by being chilled. They were served in a totally delightful lemony oil (bits of lemon zest present) and topped with something unidentifiable but delicious. It looked like bacon but tasted sweet- we guessed figs but later determined them to be almonds soaked in a sugary substance. The compilation of flavors and textures was perfection, and the portion satisfying to share. 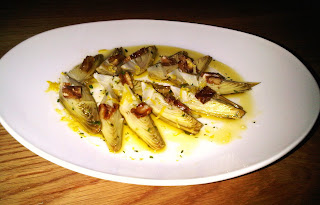 Next up was a Cuban sandwich ($10). Knowing Garces' Latino heritage, we figured this was a good bet, and once again, we were not disappointed. The bread was the perfect amount of toasted- crunchy and substantial. The blend of meats and cheese as well as the vinegary crunch of pickle and the traditional mustard was well complimented with a side of sweet roasted peppers. The best part was the sandwich was cut into quarters- perfect for sharing. Again, this portion was satisfying, especially considering the richness of the piled meats and cheese. I've had quite a few Cuban sandwiches in my day, and this would certainly top the list. 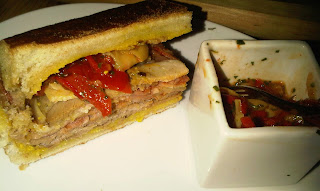 We also ordered a pizza- A requested the Verde- a white pizza with spinach, asparagus, fava beans and arugula ($12). I was a little hesitant about this combination, but it really created a fresh, crisp, literally "green" take on Garces' flatbreads from his other restaurants. Serving 5 smallish slices, the thin crust pizza was topped with the perfect ratio of cheese and vegetables. The asparagus was thinly sliced and tender, creating a sweet compliment to the spicy arugula. Another good menu item to share, this pizza was the definition of fresh and delicious. 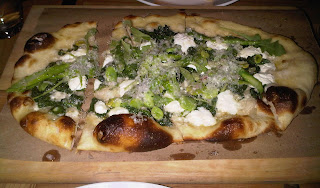 Of course we had to end the meal with dessert, so we ordered a cookie plate ($4) and the Marjolaine ($5). The cookie plate was also totally shareable- two each of a tiny raspberry muffin, a chocolate madeleine, and a grapefruit macaron. The macaron was our favorite- they must use some sort of grapefruit extract, because the flavor was prevalent in both the soft, chewy cookies as well as the sweet tangy "inside" (I actually ate mine like an Oreo, twisting apart the cookies and tasting each part separately). The madeleine seemed to be missing some sugar- I love dark, bitter chocolate but this was almost bland. The muffin was also unremarkable. 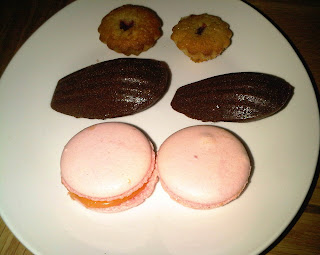 The marjolaine, on the other hand, was totally remarkable. It had 5 different layers- a denser pastry crust, a thicker creamy coffee layer and... some other stuff, topped with a thick chocolate ganache. Again, the complexity that the mixture of these seemingly simple flavors created was outstanding. 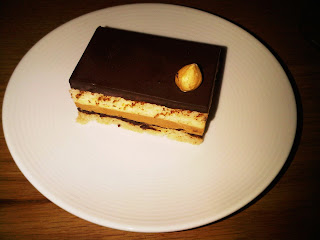 The restaurant also serves a daily "special" for two to share, which we definitely want to go back to check out (Tuesday duck confit cassoulet anyone??), as well as a deep dish pizza that we never saw but was apparently popular (we overheard our waiter telling a group there were only two left). It's very notable that this place serves top-quality food that really engages your senses, all for an affordable price. Some of Garces' restaurants can really make a dent in your bank account (OK, maybe only if you're poor grad students like us..) and we're so glad he has successfully created this "food heaven" in the middle of the city.