As undergrads at Penn, J and I had our favorite cheap eats on or near campus, which we would go to on a fairly regular basis (and pretty much always order the same thing too). Qdoba, Greek Lady, New Delhi (our personal fave), Beijing and Pattaya received quite a bit of business from us throughout our four years. In the two years since we've graduated, the food scene on campus has changed substantially- several new restaurants and gourmet food trucks have popped up around the area. The additions began in the summer after our graduation, when a small "hole-in-the-wall" restaurant opened up nearby my at-the-time place of employment. I for some reason never tried it out (probably because I was working for $8/hr and hardly went out to eat).

Fast forward to this year, when I happened to score some free food at a lab function, and stumbled across the best pita bread I have ever tasted. I immediately searched out the restaurant responsible for this fluffy deliciousness, and was surprised to see that it originated from this tiny new place. Since then, I try to make any excuse I can to visit Hummus Restaurant (simple, but fitting name for a Middle Eastern spot), and I am certain that if it was around when I was in college, it would have been high on our go-to cheap dinner list. Even now, our bank account appreciates the dinners at Hummus as a much softer blow in between our big splurges.

The restaurant is extremely narrow, but long, with the kitchen located at the very back. It's an "order, wait for your food, then sit down" place -- I suppose it could be considered fast food but it is far too delicious for that title. The menu has a good variety of sandwiches, which can be made into a "platter" for an additional $2- $2.50, as well as a number of salads. Everything is Mediterranean style, lots of falafel and hummus and tabuli, etc. Each platter includes an enormous amount of food- the central item (falafel or a number of meat options), a huge scoop of hummus, fries (or rice), a big, fluffy pita and two side "salads." The salads are all really good, which makes it difficult to decide between marinated cucumbers, tabuli, fried eggplant (not really a salad, but still amazing), red cabbage, and beets. Anyways, yeah, like I said, a lot of food but each item is fantastic. They advertise themselves as healthy, and while some items are certainly quite healthy, I'm hesitant to label anything that goes into the deep fryer as such. At the very least, the food is extremely fresh and consists of only natural ingredients.

The necessities (in my opinion) are the falafel, the pita, and the hummus-- and as the pita and hummus are part of each platter, I usually go for the falafel platter ($7.45). It comes with a number of golf ball sized, crispy falafels, which Hummus notes are made of ground chickpeas but I believe are actually made from fava beans-- I mean, since when are chickpeas green? They are perfectly paired with a generous scooping of the hummus. The hummus itself is good enough to live up to the name of the restaurant- it's extremely creamy, a bit plain on flavor but matches the flavors and textures of the falafel and the pita quite well. Since the falafel are fairly small, the crispy outside holds it together really well- while it is a bit crumbly after first-bite, it won't fall apart in your hands. The fries- if I'm trying to lean a bit healthier, they allow me to sub a third salad for the fries- but on occasion, they are worth the caloric splurge. I'm not sure whether they fry them in the same oil with the falafel but they definitely have a hint of a special flavor. They're also on the softer end, which I'm a fan of. 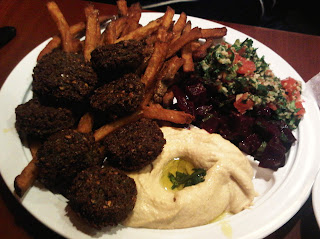 The side salads really shouldn't be disregarded either- I could definitely order an entire plate of just these salads (if I didn't totally crave the pita and the hummus...). The beets are small and have a bit of a pickly flavor- yum, pickles (oh, Hummus also serves great pickle slices for free). The cabbage, cucumber, and tomato salads are a little on the plain side, but as veggies go, they're great on their own and don't need a lot of sprucing up- plus, they retain their fresh crispness which helps balance out the heavier fried items. 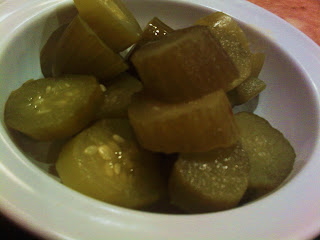 I haven't had much experience with the meat items at Hummus, as I just find it somewhat unnecessary, but sometimes you need a little animal protein for dinner. The shawarma ($8.95)- marinated chicken thighs that are piled onto a long stick and slowly roasted on a spit- is shaved to small bits with some sort of device that truly looks like an iron. The bits of meat are good mixed into your plate of food- I discovered that a ball of falafel with a small pile of meat, all dipped in hummus makes a good mixed mouthful.. strange but true. J, on the other hand, wasn't a huge fan of the shawarma, as she decided the meat "tasted like hotdogs." It did have a slight kielbasa flavor once she mentioned it, but since I like pretty much any kind of sausage (TWSS?), I was fine with that. The chicken breast ($8.45) probably would have been more to her liking- chunks of white meat with great grilled flavor (but none of the hot-doginess). 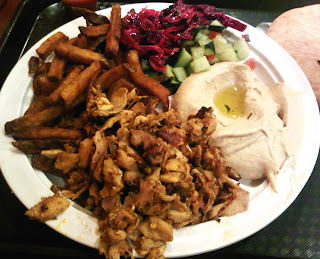 J and I are pros at "saving the best for last" when we're consuming a meal, and I always save the pita for last- even when I'm extremely full from everything else, I have to consume the entire thing. You can get either white or whole wheat, both have the same texture and the whole wheat is a bit darker- but not a whole lot of flavor difference. It is much thicker than other pitas I've had- usually pitas are thin and crackly, and difficult to make sandwiches out of as they tend to burst easily. The pitas at Hummus are completely different- they look more like very fat pancakes. The restaurant uses them for their sandwiches, which are stuffed beyond belief and they seem to hold up well under the weight. They are seriously just.. pillowy delights. You can buy them five for $3 which to me seems like a great deal, but I've sadly never taken advantage of this for use at home. 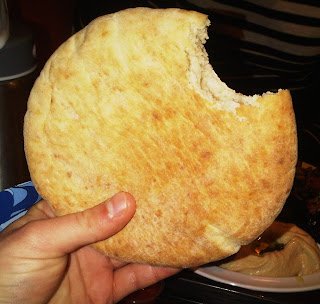 Hummus also serves a few desserts- we have a quite long-lived special love for baklava- but I have never been remotely interested in dessert by the end of a meal here. I pretty much need to be rolled home... perhaps it is good that it requires a two mile walk afterwards. Spending under $20 for a gigantic meal for two: I can't ask for much more.