This past weekend we took a quick trip down to our nation's capital to visit a college friend. Food wasn't exactly the focus of the trip, but of course we wanted to explore the restaurant scene in another city. Our friend suggested a place near her place of work, so we checked it out for a late lunch after an appetite-inducing Greyhound ride.

The concept of the place, called Founding Farmers, is very unique- essentially focused on fresh, seasonal ingredients grown with an emphasis on flavor. They don't care so much about where the food is coming from location-wise (apparently they buy carbon offsets to take care of this), but more of a concentration of "knowing where your food comes from and how it was made." The building is also LEED certified and "eco-friendly." The inside is very open, with large rustic wooden tables and simple shelving stocked with jars of vegetables. However, located at 19th and Pennsylvania Avenue (close vicinity to Mr. Prez), the concept of a warm, inviting farmhouse seems a little out of place. The area is chock full of tall, mirrored glass, flashy office buildings (think World Bank), so I'm a little confused about why they chose this area, but that's not really important. 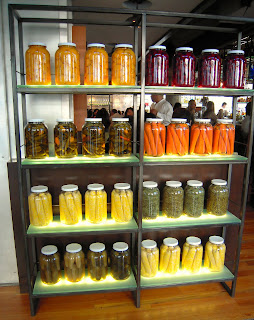 When we arrived a little after 2 PM, the place was full of customers, but without seeming loud or crowded. We were told there was a 30 minute wait, but only ended up waiting about 5 minutes- just enough time to snap some pics of the interior. We were seated at a tall table with stools- big enough for 6, which gave us plenty of room for all of the impending food. Our waitress was absolutely phenomenal- perfect mix of informative, friendly, and humorous without being overbearing.

We each started off the meal with an "appetizer." A got her fall-back favorite, cornbread ($5). Though we aren't huge fans of corn itself, we are fans of bread, and cornbread is no exception. Baked and served in a cast iron skillet, the bread was piping hot, crumbly and full of whole kernel corn. On the drier side, the texture was grainy, with a slightly browned "skin" on top. The flavor was naturally sweet, and the dish of creamy white butter sitting in a pool of honey served as simplistic, yet complementary accompaniments. 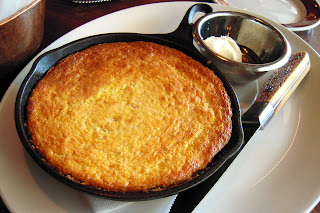 I ordered the fried green tomatoes ($7), another one of our personal fave's. We have had these at a variety of (mostly southern) eateries, but these hands down win the "Best of Show" award. Four thick slices of firm, not-soggy-at-all, unripened fruit evenly battered in cornmeal and fried to crispy perfection... the only downside to this appetizer was the fact that we couldn't finish it. The tomatoes were served with a creamy goat cheese spread (A thought it was a little on the goaty side) as well as a well seasoned guac-ish spread with big chunks of avocado and a "secret ingredient"- sardines. 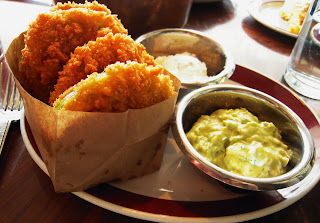 We also got a big bowl of the "Popcorn of the Day" ($2)- fresh air-popped corn (we were really on a roll with the corn here) with the Chef's Choice of seasonings. We were treated to Old Bay & Sea Salt popcorn- not overly salty or greasy, and certainly an interesting and unique item on the menu. A and I often reminisce about airpopped corn from our childhood, and this hit the spot. Again, the bowl was much too large for us to finish, quite sadly. 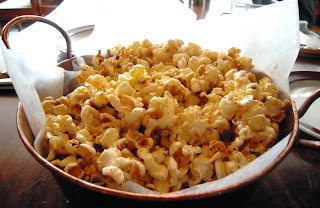 Because it was lunchtime, we all ordered either sandwiches or salads, so we can't attest to the "entrees" portion of the menu. A ordered the Roasted Vegetable and Avocado sandwich ($12), served on a rye-sourdough thin sliced bread which was unfortunately overly crusty and/or toasted- she claimed it was hard and stabbed the inside of her mouth (she even complained about this the next day...) but was still totally delicious. The bread was layered with a goat cheese-avocado spread, as well as a mix of roasted peppers and eggplant and fresh, crisp lettuce, tomato and cucumber. It was accompanied by housemade potato chips- thick cut and crunchy, but a little plain (though how much can one expect from potato chips?). 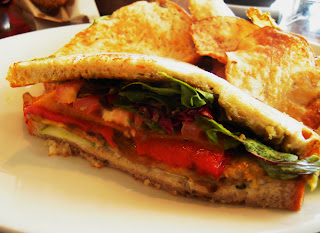 I ordered the Roasted Chicken Salad ($13), which I was told upon ordering was actually chicken salad on a salad. I like chicken salad, so this was totally fine by me. The bed of lettuce consisted of large pieces of Bibb which I actually had to use a knife with- I couldn't just shove the giant thing in my mouth like I wanted to. The dressing on the greens was very vinegary which I love, but it was a little heavy handed making the sharp acidity of the vinegar a tad overbearing. The chicken salad was terrific- shreds of rotisserie chicken in a creamy, not too heavy binder filled with almonds and golden raisins. There were also some tomatoes, avocado chunks and golden beets (so good...) that all tasted really fresh and flavorful. The salad was served with a thick slice of grilled bread- a good hearty French misted with olive oil, with a good crust to soft middle ratio. Overall, very pleased. 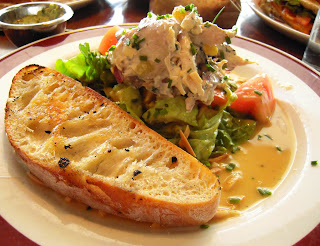 Our friend ordered the grilled cheese served with tomato soup and a side of french fries ($10). Again, the restaurant is really focusing on simple and "down home"- we were a table of happy eaters. 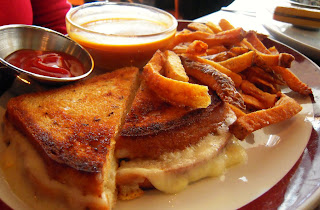 Definitely too full for dessert, but the menu looked amazing- doughnut holes anyone? They also have a wide variety of coffee, tea, and housemade sodas, as well as a fully stocked bar that focused on "organic" labels if you're into the cocktail scene. A & I have already decided we don't want to go back... we NEED to go back. If you live in DC, don't walk but RUN to this restaurant- great food, great atmosphere, great mission, great service, and totally affordable- 5 stars in all the categories that matter to us!
Posted by Julianne at 7:05 PM