The Evolution of Brunch

Brunch is one of my favorite meals, although it does seem a bit "faddy" and possibly even ridiculous- the joining of two words has never been this well-integrated into the English language. However, it has been a special event since my childhood, when J and I, along with our older sister and two cousins, would petition for Sunday Brunch every year at our annual weekend visit to the Hyatt Grand Cypress Resort in Orlando. The all-you-can-eat meal in the Cascade Room seemed like such a grand event- complete with personal jars of jellies and jams, a floor-to-ceiling waterfall, a bathroom with white fluffy towels instead of paper, and sometimes even a live piano player. The buffet included pancakes and eggs and fruits and muffins but the highlight was certainly the donut station: freshly made donuts to be topped with chocolate syrup and M & M's and a slew of other childhood delights.

Since our times at the Grand Cypress have sadly come to an end, brunch has evolved, yet retained many of its same elements of awesomeness. Brunch in college was often eaten at the dining hall or at Triangle Diner (now extinct), and was a gossip-y event that lasted many hours and included far too many calories to count. Since those days, brunch has become slightly more civil and much more palatable. J and I occasionally treat ourselves to a weekend brunch, searching out some of the best breakfast-lunch fusions Philly has to offer. It is now made more luxurious as it either follows the very rare chance we sleep in late, or as a splurge "refuel" after an extended exercise session (I like to ensure J is fed very well after her ten mile runs). There is definitely something innately special about brunch, and I always thoroughly enjoy its tendency to consist of enough food to count for at least two meals.

I have had many fantastic brunches around the city which have unfortunately been consumed PB (Pre-Blog), as I would have loved to share them with you. Some of my favorites include the famous Stuffed French Toast at Sabrina's (the Art Museum location), the Cypriot Breakfast at Kanella, the hearty beans, thick cut grilled toast and eggs at Pub & Kitchen, and any of the goodies at Cafe Estelle. This past weekend I added another "favorite" (I have far too many) to the list: Supper. I find it somewhat odd that a restaurant named Supper would have such a great brunch; on the other hand, the other meals I have had there have been such perfection that I am not surprised at all.

This is somewhat more of a fine-dining brunch that the others I have mentioned, to the point that reservations are highly recommended. It was a perfect brunch day- the first beautiful spring weekend of the year here. Supper has two floors, but only uses its downstairs for brunch, making it quieter with more personal attention- there were probably 7 or 8 groups of diners at any given time with almost as many employees in the kitchen. We were seated close to the open kitchen, so we enjoyed watching the chefs at work, particularly in the late plating stages, along with viewing most of the dishes on the menu (if I can't eat them all, I at least want to see them!).

The menu presented with far too many options, which was not helped by our waitress announcing four special additions, including a baklava plate and a pulled rabbit BBQ sandwich. J and I decided to stick with the regular menu, and both ordered an "entree" and a side. The sides came out first, so they were really more like "appetizers", although we enjoyed them throughout the meal.

Both of our sides came fresh out of the deep fryer- cornbread hush puppies for J and banana beignets for myself. They were well portioned at four small spherical pieces each (perfect for sharing). The hush puppies ($4) were good- but not exactly what we were expecting. They weren't crunchy on the outside, crumbly in the middle as fried cornbread would be- instead, they were soft, very much like a fasnacht now that I think about it... a dense, savory fasnacht. We commented on its lack of cornmeal, instead having the thickness and starchiness of a potato batter. They were covered in freshly grated cheese (I watched the grating process from afar), and potentially rolled in a bit of salt (we couldn't decide on this fact). Overall, a decent start to brunch, but definitely left me wishing for my corn pancakes from the Pantry. 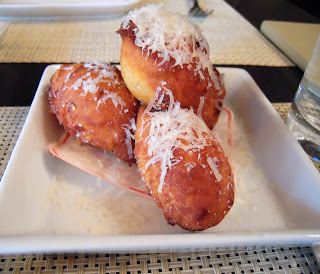 The banana beignets ($5) were sweet and light, a good complement to the hush puppies. A small chunk of banana was wrapped with a bit of dough, fried, and then coated in cinnamon sugar. The dough was thin and light enough to allow more oil absorption in the fryer- making for a more greasy bite. The banana was practically melted inside, and the cinnamon sugar sweetened the deal. 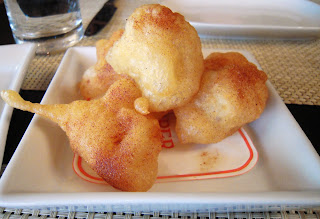 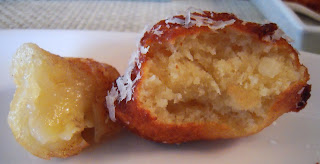 Our main dishes came out quickly- the work of all those kitchen guys came together fast. I ordered the Supper Frittata ($13), and chose housemade country sausage and sauteed greens as my two fillings. The frittata is made in a small cast iron skillet (reminded me of Founding Farmers cornbread), and is served with the caramelized onion hashbrowns and toast. I'm big on omelettes, so the frittata was a perfect choice. The serving was a bit large (surprising for Supper, famous for tiny plates), perhaps because it was such a hearty dish. The eggs were mixed with an excellent crumbled sausage- I would order this on the side on my next visit- and a few strands of spinach, and then cooked (baked?) to perfection- not runny nor dry in the least. The hash browns were a jumble of small cut, cubed potato and soft slices of onion, very flavorful and complementary to one another (I normally eat breakfast potatoes with ketchup and the thought didn't even cross my mind here). The toast is really just toast- until you combine it with a slather of butter and (homemade?) strawberry jam. I could have eaten many pieces. 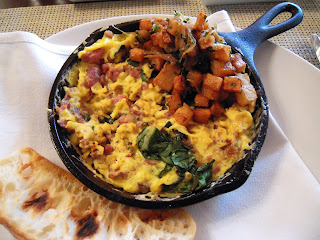 J had the Country Pate & Eggs, a combination of many of the side dishes served together (which probably would have been more economical to order them all separate!). Two eggs (over easy, of course), toast, the same onion hash browns, and "scrapple-fried" country pate. We are not pate connoisseur's, but she didn't see the resemblance in this particular take on the dish. It was crispy on the outside, and not overwhelmingly flavorful (is this good, or bad? I'm still unsure). The creaminess that defines pate was replaced with a dry, crumbly, sausage-like consistency. The scrapple and country components were not immediately obvious to us. It was served with a whole-grain mustard and two slices of gelatinized apple, which had a somewhat potpourri flavor, interesting but not extremely enjoyable. I was glad that she had her own toast and hash browns so that I didn't have to share mine, but looking back we could have ordered differently to experience more of the menu. 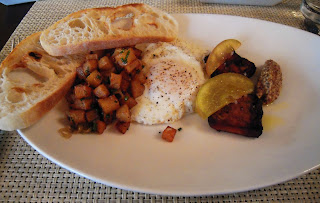 Overall, Supper Brunch gets four thumbs up in terms of quality of ingredients, service, and originality, but somewhat wavering on execution. While I will probably not be back anytime soon (solely due to lack of time and the overabundance of good restaurants here), I would definitely recommend Supper for any meal.