One of the great things about Philly is its variety of neighborhoods. You might say that ALL cities have lots of neighborhoods, but the special thing about Philly is that you can walk from one neighborhood to another with ease. This morning we collected a few friends and walked from our Rittenhouse condo over to Chinatown to meet up with even more friends (and friends of friends) for a totally new eating experience: Dim Sum. A & I have never been brave enough to attempt to do this on our own, so we were glad to be in the company of experienced Dim Sum-ers, including a good friend who blogs about her eats in and out of Chinatown on i love pork bun.

We chose Ocean Harbor on the recommendation of a friend, and decided to meet at 11:30 as it is "common knowledge" that if you arrive at noon or later, you'll end up waiting. The restaurant contains only big round tables for large groups, and we snagged one of the last open tables, cramming in enough chairs for 11 people. As soon as we sat down, we were brought a steaming pot of tea, which was the only beverage offered to us throughout the meal (in the future I would bring my water bottle- everything is salty!!). The tea was pretty strong, with lots of loose leaves in the pot, and tasted vaguely like the smell of new running shoes. Interesting, but not really good, and certainly not refreshing.

There was no menu to be seen- as my friend declared, "this is a pick and point operation." There were several "waitresses" pushing carts around the restaurant, and through cryptic gestures and some semblance of communication, we started out with about 8 different dishes. Some of the waitresses were a little pushy, trying to unload their carts of dishes that were quickly becoming lukewarm, so we ended up with a few things that we didn't really want. However, each dish falls in the range of $3 to $4, so it wasn't too big of a deal.

The first dish was fried squid. Call it calamari, but it was quite different, as the pieces were whole and the breading light, making no real attempt to mask what we were eating. This dish was one of the less fresh items that we tried, but it was still pretty tasty. Kind of like cold calamari... nothing too exciting. 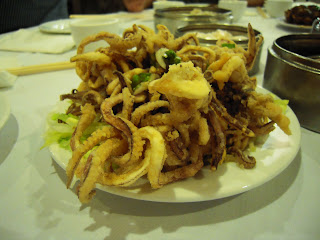 We also snagged several steamers, which each contained three pieces of various dumplings and other somewhat undescribable steamed balls of dough filled with meat (typically pork or shrimp) and spices. The texture was really dense and a little slimy, but in a good way. The different meats were chopped and mixed with a good amount of spices, and surrounded by a thick wrapping of rice flour dough. Some of them were pan-fried after steaming, which mixed up the texture and provided a little bit of crisp. 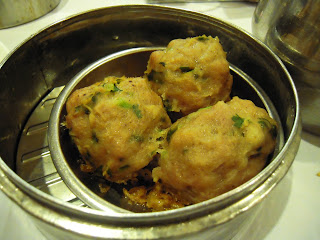 Another type of dumpling had a thinner, wetter, shiny rice wrapper- the only way I could really describe this is that is felt like one big giant wet rice sheet. These were filled with whole shrimp. However, with our less then stellar chopstick skills, picking up this type of dumpling caused it to promptly collapse and dump out its contents, which made them seem appropriately named. The softer wrapper was a good complement to the firmness of the shrimps. If you like rice and shrimp, this was your kind of dish- simple yet satisfying. 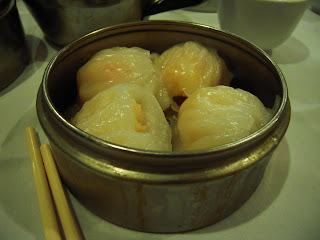 Perhaps the highlight of the meal was my insisting that we try chicken feet, as these too came recommended by a trusted source. I wish that they had been a little more disguised, because they really just looked like chicken feet, deep fried and covered in a savory-sweet sauce. I had to hold this like a chicken wing, eating the skin and tiny bits of soft tissue that surrounded what seemed like hundreds of tiny bones and tendons. Annoying to eat, messy, and I'm not a HUGE fan of chicken skin, but I'm glad I tried it. The sauce is probably what made it edible- a little tangy, like a really mild barbecue sauce. According to Wikipedia, who is greatly aiding in my ability to remember each dish, the sauce is typically a black bean sauce. I conquered one of the feet, leaving a small pile of bones, though my blogger friend declared them "too gnarly" after a few attempts to eat around the bones. 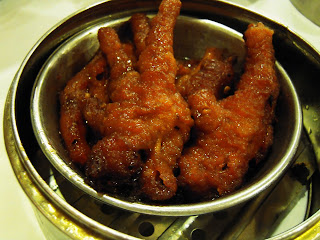 Another common Dim Sum dish is taro cake. Though this version was labelled as subpar by our dining mates, I thought the thick chewy texture was pleasing. It was likened to a thickened Cream of Wheat formed into a cake with tiny bits of pork and thickly sliced. Taro is a very starchy root vegetable, so it makes a doughy consistency that didn't particularly taste like anything, but was served with another dark, salty sweet sauce that improved it greatly. 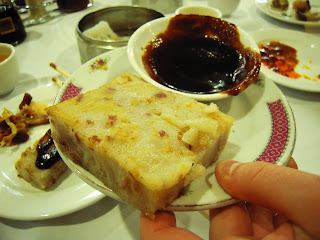 There were also a variety of "buns", which A & I were quite excited about after our encounter with the Pork Bao Bun in Nashville. We requested steamed pork buns from several of the waitresses but were denied them with a wave of the hand and a "Later! Later!" Not sure why we weren't allowed to have limitless steamed pork buns- we were only given one dish of them to be shared with the whole table. A & I snagged our own (sorry guys!), but weren't overly impressed. The pork wasn't as BBQ-y as we would have liked, and the filling was a little on the meager side. The outer dough layer wasn't quite as puffy as our previous bun, and a little on the dry side. However, the sweet dough and saucey meat were still enjoyed. 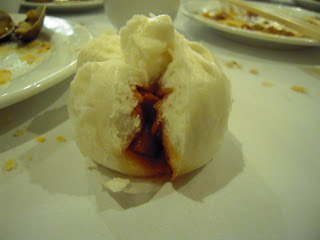 Another bun that we loved was the sesame seed bun. This one was a rice dough that was deep fried, making it extremely heavy and greasy, coated in sesame seeds which provided a light nutty flavor, and filled with a creamy sweet bean paste. Only a few bites of these were necessary, because they were so incredibly rich, but definitely another highlight of the meal. 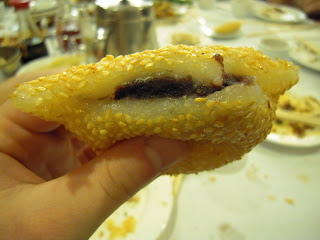 We also snagged some vegetables to go with all the meat and carbs. The Chinese broccoli rabe was a good, light interlude to all the salty greasy dishes. Crisp and fresh, with a good mix of crunchy stems and softer steamed leaves. The Chinese eggplant, on the other hand, was the opposite of light. Eggplant is so porous that it just soaks up every ounce of oil that its fried in. However, the super soft texture and sweet flavor were reminiscent of fried plantains... super delicious, but again, too rich to eat much of. 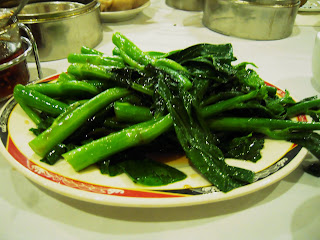 Another interesting dish was the lotus-steamed rice. A mound of very wet, sticky rice mixed with minced pork and steamed inside an enormous leaf that was florally sweet smelling. I'm glad I had guidance in this one- I would have tried to eat the leaf, but this part is simply discarded to leave a shareable portion of meaty rice. 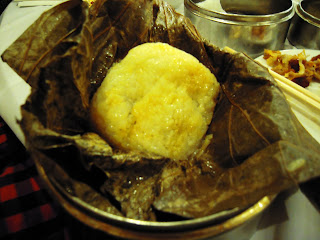 The only "dessert" dish that was ordered were egg custard tarts. I ate this in the middle of the meal as it was ordered, and it was piping hot. A described it as an exploding egg yolk in her mouth. A little too hot for me to pass judgement on the taste, but the crust was extremely flaky, cupping the sweet gooey eggy inside with a light pastry finish. 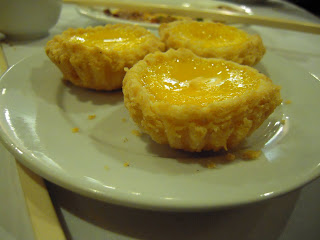 We ordered many other dishes that I didn't snap pictures of or even try- a total of about thirty. Some of them looked good, some didn't, and some were just "freakin' Chinese food"- piles of vegetables and noodles that you might order at your local takeout place. At the end of the meal, we took our seemingly randomly marked bill up to the front and were given an equally random total of about $98 for our group of 11. We all pitched in ten bucks, which seemed ridiculous considering all of the dishes I tried. I expected to come out stuffed, but the food was really too rich and salty for my taste to overindulge, which is probably a good thing.

Overall, I'm very glad that we took this opportunity to experience Dim Sum- we now feel fully prepared to attempt it ourselves and can even show other friends the ropes in the future. There are also several other Dim Sum places that we could try to compare quality and variety within Philly's Chinatown. 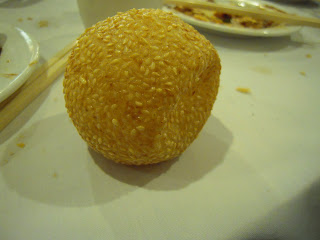