After visiting an authentic German eatery (documented here) in January, our grandpa seemed somewhat embarrassed that we didn’t know what spaetzle (pronunciation: SHPET-sla) was. Since we seemed particularly delighted by it (who wouldn’t like buttery, crispy noodles?), he divulged the fact that since he grew up in a REAL German household (as his parents migrated from Germany), he was well versed in the making and eating of spaetzle, and even owned a spaetzle-making device. If you’re interested in making the dish, you don’t necessarily need one of these (a colander and a spatula seem to be the next best replacements) but we were excited to try it “the real way.”

An available weekend happened upon us (we’ve been crazy busy with both work and traveling for the past six forevers), and we jumped on the chance to spend some time with our grandparents and master the art of spaetzle-making. As our grandpa pointed out, you can’t “just eat noodles,” and he recommended we pair the spaetzle with a roast of beef and braised red cabbage. Like the Super Grandpa that he is, he had all of the necessary ingredients on hand when we arrived- and had even prepared the meat a day ahead of time so we could focus on our real project.

Our first mission was to start the cabbage- it takes at least an hour to cook down to the right consistency, and it seems as if additional time is beneficial. To start, we chopped an onion (in thin rings), a green apple (our supervisor disapproved of the chunks that J cut it into, insisting that all of the ingredients must be cut into the same shape) and two cloves of garlic. These must be browned in bacon fat prior to the addition of the main ingredient. You could cook down a couple pieces of bacon, but apparently our grandparent’s household keeps a tub of bacon fat on hand- two thumbs up from us. 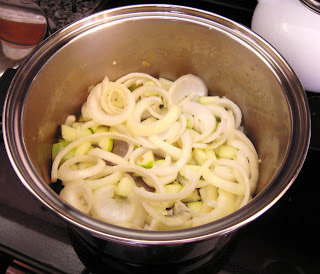 After four or five minutes of browning, we began to add the cabbage, which had been cut in half, cored, and thinly sliced. It was a monster cabbage, so we first added just a half to prevent cabbage overflow. After a few minutes, the cabbage began to cook down, and we added a half-cup of water to help the process along. Eventually about ¾ of the head of cabbage made it into the pot, along with ¾ of a cup of apple cider vinegar, a heaping tablespoon of German Dijon mustard, some large grain salt and a few twists from the pepper mill. As soon as it all comes to a boil, the active prep is over- just bring the heat down, plop the lid on, and enjoy the cabbage-y, vinegar smells that permeate your house. Just kidding, it didn’t smell as bad as I expected, and the final product was well worth it. It simmered away on the stove for about two hours before the rest of dinner was ready, and cooked down to an almost disappointingly small amount (still enough to feed eight…). 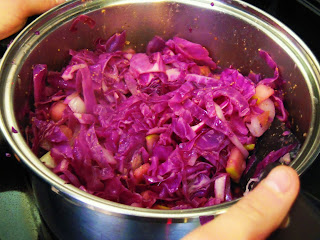 On to the spaetzle making! We printed a recipe we found online, which was then fairly modified by the professional. The recipe is extremely simple, with only four ingredients. We started with eight cups of flour (yeah, we made a lot of noodles) and one teaspoon of salt. After combining these dry ingredients, J formed a well in the middle of the flour heap and cracked three eggs into it. And here is where some controversy began- our dad thinks that we should have followed the recipe we found, which called for six eggs. However, our grandpa remembers making a large batch as a kid with just one egg, so we decided to compromise with three. We whisked the eggs (atop the flour) and began pouring water into the hole while simultaneously beginning the combination process. The recipe called for 3 ¾ cups of water, but we decided to take it slow and add it little by little to ensure that we would end up with the proper dough consistency. 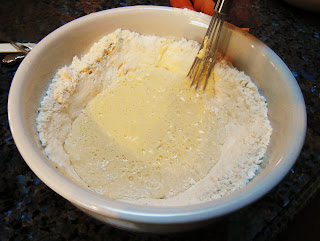 After mixing and mixing and mixing some more, we finally arrived at our final dough product: very thick and heavy, more so than pancake batter but less so than bread dough. A large pot of water was boiling away, waiting for the first batch of spaetzle to be cooked. Step One: load the dough into the spaetzle machine, which comically resembles a huge garlic press. Two: squeeze the dough through, into the pot of water. 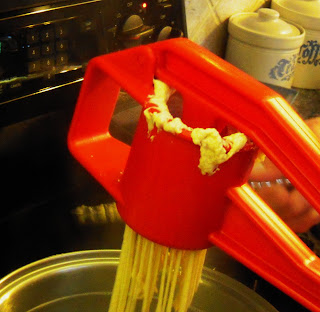 Step Three: Recruit another pair of hands to cut off the resulting strands of noodles into different lengths (we had three different noodle cutters, all using their own spaetzle length discretion). Four: curiously watch the noodles roll around the bottom of the pot and slowly rise to the top (it takes just a minute or two). Five: when all of the noodles have risen, scoop them out with a strainer, making sure to let most of the water drip off. Transfer to a giant bowl, and repeat. About ten times. Like we said, a lot of noodles. 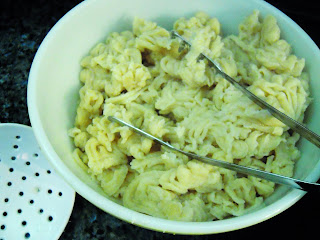 The noodles are kind of sticky, so it’s definitely best to serve them immediately. We loaded our plates with spaetzle and red cabbage, and covered the noodles with chunks of beef and gravy. It looked great: authentic German food that WE had just made! As we sat down to eat, the great spaetzle debate continued. We loved the chewy texture of the noodles- some of them had stuck together in the pot to form “chunks”- we apparently inherited a love of anything dough-like from our mom, so the three of us were in dough-y heaven. Our grandpa seemed to be a bit disappointed, and told us at least fourteen times throughout the night that when we next attempted the dish, we should add more water to achieve a thinner consistency, and therefore a smaller noodle. However, the general consensus was that, while it may not have been perfect, it was delicious. The noodles themselves don’t have a lot of flavor, but easily soaked up the meatiness of the gravy and was a perfect textural accompaniment to the tender meat. The red cabbage was also a huge hit- it was extremely soft with an acidic bite from the vinegar that was cut down a bit by the sweetness of the apple. Vegetable perfection, well appreciated for both its delicious delightfulness and its health benefits.

We had a fun time cooking with our gramps (although he’s very picky about our cooking techniques) and learning how to make a dish that was enjoyed by our family for many generations. It’s a fun process, and makes a great meal for a large group- cheap, quick, and satisfactory to most palates. We want to experiment with it more in the future- maybe to increase the health factor a bit (some internet browsing showed some recipes adding shredded veggies into the dough, or mixing the noodles into a pesto sauce) or to change the overall texture- pan-frying them to a crisp in a little butter would more closely replicate what we had at Brauhaus Schmitz. Our grandpa promised to leave us the machine in his will, but we would love any extra excuse to come visit, so for now, we’re leaving it with him. 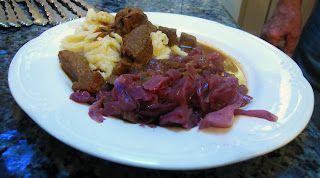