Sweet Treats of the Vegan Variety

Although A & I are in no way vegan, vegetarian, gluten-free, etc etc etc, the majority of our food intake can be categorized under Michael Pollan's assertion: "Eat food. Not too much. Mostly plants." However, two things can cause us to sway from this policy: a good/interesting meal in a restaurant, or a delicious dessert. We've shown you all a few of our baking endeavors, and they aren't always the pinnacle of health. Sweets just seem so much better when they're chock full of refined sugars, bleached flours, and butter (or even better, Crisco...). However, we work hard to stay healthy and fit, so finding a good balance between doing so and enjoying good food is a primary goal. Therefore, the opening of Sweet Freedom Bakery on South Street piqued our interest when it opened a few months ago.

A vegan, gluten-free bakery, SFB actually markets itself to those who suffer from allergies (which, VERY fortunately, is not us) but also as a more health-conscious approach to sweets. We frequent the Brown Betty around the corner from our condo, so we knew this place was going to have a tough task in impressing us (at least in the cupcake category). We stopped by on a sunny weekend afternoon to find a good selection of fresh-baked goods available. Although the prices are a little on the steep side, we realize that it costs more to bake with alternative ingredients.

The shop is located between Broad St and 15th on South St, which is a little random for such a bright, sunny little bakery. There are a few seats inside to enjoy your selections on site, as well as a table or two on the sidewalk. The atmosphere is very cheery and fresh, and the women working the counters were extremely sweet. One group came in with a few questions including one about the inspiration behind the shop. One of the co-owners was on hand to answer this, and she pointed out that many vegan desserts are still "full of crappy fats and sugars." SFB takes the vegan approach but then goes the extra step (or multiple steps) in really finding a better way to bake.

I have a not-so-secret obsession with the oatmeal raisin cookie whoopie pie sandwich concoction found at Whole Foods, so I had no problem choosing the chocolate chip cookie sandwich as my treat. Surprisingly, I actually enjoyed this version even better. The cookie was soft and chewy, just how I like them. A little on the crumbly side, but not a hint of crunchy overcooked cookie, even at the edges. The vanilla frosting middle was sweet and creamy, and far less greasy than the WF version. It was a litle reminiscent of the Oatmeal Creme Pie (Little Debbie- Dad how did you let us eat those?!) that we grew up eating. But... no artificial ingredients, no butter overload, not at all heavy- the perfect portion size- and totally delicious to boot. I was really astounded by how a more natural approach to baking could really come out so well. 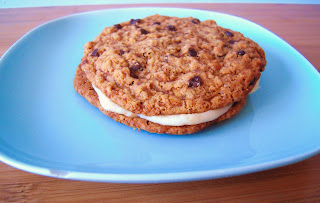 Of course we had to test out the cupcakes, so A ordered the banana chocolate chip with chocolate frosting. Though the cupcake lacked the airy fluffy texture that your average cupcake possesses, this cupcake was more up our alley as it was dense and extremely moist- more like a banana bread. Also, there was no awkward cupcake remnants left in the wrapper- it held together extremely well. The frosting was a good extra touch to add an additional chocolately component, but the cupcake would have stood well on its own. The chocolate chips gave it a little extra density- there were several in every little bite. Although its probably not fair to compare these with Brown Betty, SFB certainly holds its own in the cupcake category (or maybe we're just absolute suckers for dense cake bread muffin things). 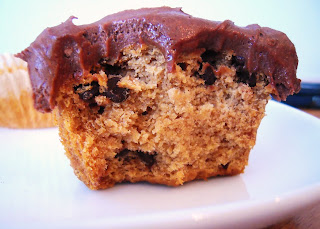 Although we certainly will return to SFB, we also wanted to try our own hand at baking. Although this recipe contains nuts, which is a no-no at SFB, it is vegan, gluten-free, and also raw (another health food phenomenon). Basically raw=uncooked. Which in baking, is a little weird, but we'll let it slide, mostly because this recipe was SO EASY and SO DELICIOUS. Additionally, and probably more importantly, raw means that each of the ingredients is in its most natural, pure, and unprocessed form.

A & I had to take a special trip to Whole Foods to pick up the ingredients for this "Chocolate Cream Cake", but we never complain about this. And quite honestly, the walk to South Street and the total cost of the goods were the most difficult parts of this recipe.

This "cake" is really in no way cake, so I will refer to it as pie from now on. This is aided in the fact that instead of using a springform pan, we used a glass pie dish. The first step is making the "crust." 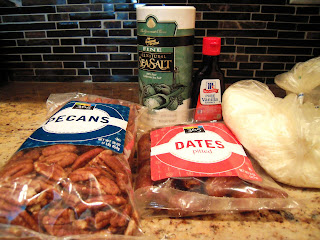 This involved throwing some nuts (1 cup raw unsalted pecans), dates (1/3 cup), coconut flakes (1 cup), a pinch of salt and a little vanilla extract (1 tsp) into our food processor and pressing the chop button. However, this recipe seems a little off on the ratio, as it came out really dry and crumbly. Our food processor is a little (ie a lot) on the small side, so it had a bit of difficulty chopping up the dates, which provide the gooeyness to the crust- what ends up holding it together. In the future I would hand chop the dates before putting them in the chopper, and probably increase the amount of dates to more of a 1:1 ratio with the nuts. 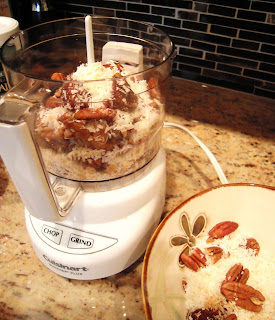 Pressing the crust into the pie dish was kind of awkward since it was so dry, plus the pie dish is shallow and I wanted to save room for the filling. Next time I'd probably also add more of the crust to try to get it to stay together better and provide more of a base to the pie. I ended up with a little baggie full of extra crust which has provided to be a delicious oatmeal topping. 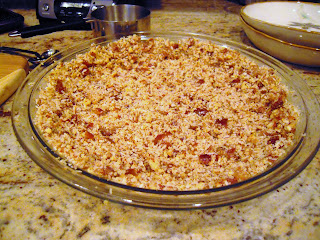 The filling is made in three simple steps. First, add most of a jar of cashew butter (my personal favorite, though you can use any nut butter) to your blender. Add some agave (1/2 cup), some water (1/2 cup), and a little more vanilla (1 Tbsp) and press blend. 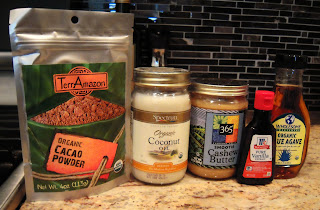 Then add the coconut oil (1/2 cup) which literally looks and feels like lard/hard Crisco/congealed bacon grease without the smell. Even though it is super high in saturated fat, it has been touted for its health properties and is used by many a health nut (Google it). 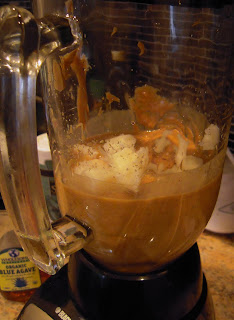 Blend this up, and then throw the cacao powder in, the main source of flavor in this recipe (3/4 cup) and blend that in as well. Pour/spoon the filling into the dish, smooth it out, cover it up and pop it in the freezer. 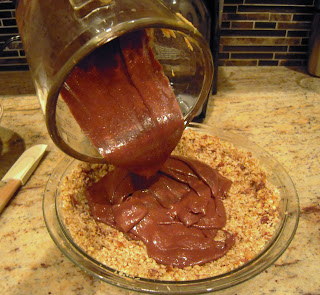 So easy (cleanup took longer than actual assembly), though I guess one downside was the wait- we let it freeze for about 3 hours before we broke into the goods. The filling is incredibly rich and thick, and as it is frozen, makes for a good firm bite. A little like frozen chocolate mousse, a little like rich dark chocolate ice cream, a lot delicious. Again, the crust was a little on the meager/crumbly side, but it gave a light hint of coconut and some little crunchy bits to mix up the smoothness of the filling. 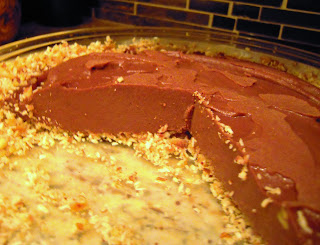 Because it is so rich, you don't need to eat a whole lot, which means we have been eating this for dessert for several nights now and still have a solid chunk left. Next time I'd try to make it in a deeper square dish and pump up the crust a bit. There are tons of recipes like this out there, and they really just require a few special ingredients- NOTHING we couldn't get at Whole Foods, though we know everyone isn't as lucky as we are to have this store within walking distance. I'm sure any health food store would carry these goods as well, and even some mainstream grocery stores probably have most of these things (though still waiting for our ShopRite to carry cashew butter...) Happy baking!