The parental units are pretty key to our lives for many reasons, some of which involve food. They like to come up to Philly to visit on a fairly frequent basis, and besides the immeasurable joy we get from spending time with them, we also almost always end up with a fair number of tangible goods. Every time we get the email from Southwest announcing when their next trip up will be (sometimes it's a bit of a surprise), it triggers thoughts of all the expensive restaurants we can't don't want to pay for ourselves. Many of our most expensive eats have been on their account, which they don't seem to mind since Gainesville is filled with chain restaurants and generally ho-hum food.

On their annual Easter weekend visit, they decided to meet up with family friends who made the move from Florida to Pennsylvania around the same time that we did. Apparently Davio's is "meeting halfway" between Philly and Allentown- - but hey, we weren't complaining! Having never eaten at this fairly well-known "Northern Italian Steakhouse", we were excited about the prospect of checking another high-end restaurant off of our list without footing the bill.

The restaurant is on the second level of a building, and requires an elevator ride- very well marked, but still a little bit strange. It is adjacent to the Club Quarters Hotel, although I'm unsure of any general connection between the two. Upon our arrival, happy hour was apparently winding down, but still created a bit of a din as we walked in. Thankfully, the eating area is fairly well separated from the bar, and there weren't too many other diners. We were quickly recognized and led to our table, where the sudden appearance of four employees (one per person) stood behind our chairs ready to tuck us in. It was a little odd, but I suppose it's part of the quality service.

We were tended to by several waiters throughout the evening, but one was "in charge." He was a very loud, very Italian man who in my opinion was a bit overbearing, but again may be attributed to the emphasis on service (and the fact that he had served our friends on several occasions in the past). However, some of his actions were borderline awkward, such as when he read us the menu (after about ten minutes of perusing it ourselves), suggesting/forcing several of us to order more food than we originally intended, and knocking me in the back of the head with a plate towards the end of the meal.

The meal began with a bread basket, served with several small plates of olives, peppers, and olive tapenade. We always appreciate a bit of variety with the gratis food, and enjoyed all of these items. The peppers were roasted and well-oiled, but apparently several of them were towards the high end of the heat chart. The pepper I ate wasn't particularly spicy, but there were a few coughs and gulps of water around the table.

The menu is focused on meats and seafoods, and offers both individual servings (ie a la carte), or pre-fabricated meals labeled "Caserecci" (Googling this word produces pictures of pasta.. so I have no idea what this means)(Editor's note: It means "homemade" in Italian). J and I decided to split an "Antipasti", which makes me laugh as it is the least Italian food I could imagine. We chose the Philly Cheese Steak Spring Rolls ($12). Although we aren't fans of the classic Philly cheese steak (so shoot us)- we enjoy a good spring roll and were drawn towards the trademark symbol on the menu. If you've trademarked a menu item, it's probably going to be good.

The kitchen was kind enough to split the spring rolls on two plates, which made sharing SO much easier. We each got a whole spring roll, served with a little pile of crispy fried.. curly potato pieces? Sort of like shoestring potatoes, but curly. It also came with a few sauces, including a spicy ketchup and spicy mayo. The "fries" were good, but also good as carriers of these sauces into my mouth. The spring roll itself was also delicious, but definitely on the rich and greasy side (not sure what I expected). The inside of the roll was less cheesesteak and more liquified Beef Stroganoff- creamy and steaming hot. The outer spring roll shell was a superb contrast of textures, shattering at every bite. I'm glad we split this item- we probably could have shared it four ways. 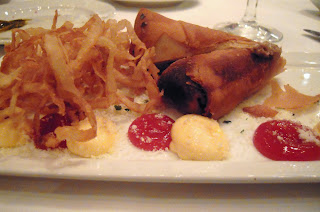 As a main course, I ordered off the Caserecci portion of the menu, as it seemed like a slightly more economical way of trying several items. The pan-seared Branzino fillet, served with Puttanesca risotto, swiss chard, and parsley pesto ($35) sounded right up my alley. My dad also ordered the same thing, unknown to me at the time. The dish was well-proportioned, which I appreciated for the price. The fish had a great texture, but I can't comment too much on the flavor- it was well doused in ground spices (chili powder? I'm not totally sure). The risotto paralleled the fish- good on texture (which can be difficult in risotto, but expected at a high end restaurant), but definitely over-seasoned. The mixture of salt and olives accentuated the saltiness. My dad also pointed out that his was overly salty (I hope our respective cardiologists aren't reading this). The swiss chard was probably my favorite part of the dish- J and I sauteed swiss chard at least once a week throughout the winter- so much so that when J attempted to snag a bite, I warded her off with my fork. Overall the dish was OK- decent, but I could make it myself (with way less salt) for a fraction of the price. 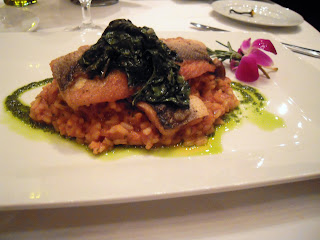 J went an alternate route and combined the a la carte oven roasted salmon ($23) with the warm spinach salad ($9). The salad was huge! The spinach was lightly steamed and coated in a tart balsamic dressing, and then topped with sauteed mushrooms and peppers, big chunks of goat cheese and pancetta, and a sprinkling of pine nuts. It could have been an entree on its own. Paired with the salmon, it was good thinking on her part. 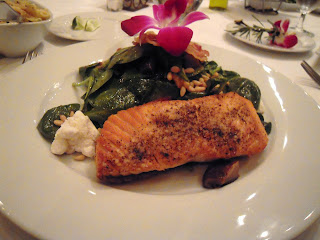 While we didn't necessarily order according to the specialities of the house, there were a couple of steaks at our table that looked well worth the price tags. The grilled "long-bone" ribeye was quite impressive, and does in fact, contain a very long bone. The consumer of this giant piece of meat threatened to pick it up by the bone and eat it caveman style, much to the delight of his wife (his threats never came to fruition). J and I don't often eat red meat, but when I am in the mood for a huge steak, I would probably return to Barclay Prime or Butcher & Singer before choosing Davio's - yes, I have fallen under the spell of Stephen Starr. The atmosphere of those restaurants is more original and exciting, the service is fantastic in a discrete way, and the food, while still priced ridiculously high, is worth every penny.

We enjoyed spending time with our family and friends, and hope to see them all more often in the future. I should mention that we were very appreciative of the meal in general, as we didn't pay for it ourselves-- thank you to our gracious "hosts"! It really speaks wonders about the Philly food scene that a classic upscale restaurant falls under par - located elsewhere, I may have been more impressed.