With J out of town visiting her boyfriend, I spent the weekend enjoying some QT with my own. After a trip to Franklin Institute to see the Body Worlds exhibit (I've never seen it before-- I definitely recommend it! We were particularly interested in the blood vessel systems), we decided to give Village Whiskey a try for dinner. I've been there myself and had thoroughly enjoyed the burger, and knowing my dining companion's limited palate, knew he would like it as well. The restaurant also has a variety of other fun food items that I can enjoy, and it is conveniently located just a few blocks from the museum.

I warned him ahead of time that there could be a two hour wait (it's a very tiny, very popular restaurant), but was relieved to find out that we wouldn't have to wait at all! I was pretty shocked, as it was 7:30 on a Saturday evening, but perhaps the addition of some outdoor seating in the warmer weather helps to alleviate the crowd. Granted, our seats were somewhat less than desirable on first look- all the way at the back of the narrow restaurant, at a counter located immediately adjacent to the bathroom and the kitchen entrance. However, the lack of a view (the counter butts up to a wall), the tight space, and the side by side seating arrangement was actually quite enjoyable as we were much closer than we normally would be at a restaurant. It also helped the conversation as I seem to have completely lost my voice (allergies?) and didn't have to strain to shout over three feet of table space. One man's trash is another man's treasure, I suppose!

The restaurant is certainly very "bar-centric", with a list of whiskeys a mile long. However, as its owner is an Iron Chef (yes, this is another Jose Garces wonderland), many people come just for the food. But, the menu is sort of crafted to fit the environment, with lots of snacky type foods and a select few sandwiches and entree plates. We started the meal with a couple of appetizers. You can choose from a handful of "bar snacks" - classics like tator tots, soft pretzels, and cheese puffs. Of course, these are all crafted in house and are definitely several notches above your average bar food. There is also a choice of several "pickles", not including cucumbers, sadly. We chose one from each category- a "snack" of popcorn shrimp and an order of pickled baby carrots.

The shrimp ($6) were a hit with both of us - solid chunks of shrimp that are lightly breaded in a slightly spicy soft shell (say that five times fast). Normally popcorn shrimp is a ball of friedness that has a hint of seafood flavor, but thankfully that wasn't the case here. It definitely felt like I was eating shrimp! The little guys are served with a creamy, spicy sauce that reminded me of Thousand Island dressing. It was a little awkward dunking them with your fingers as they are definitely on the small side of popcorn, so at times a fork was necessary - eating fried food with a fork kind of defeats the purpose but I suppose this dish can get away with it. 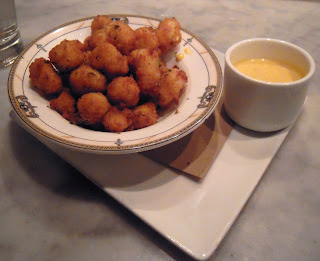 The baby carrots ($6) took me in an entirely different direction - not something you find on the average menu. I'm glad the server brought these after we had devoured the shrimp as I wouldn't want to mix and match this combination of flavors and textures (yes, I can be THAT girl). At my previous trip to VW (you knew that acronym was coming), I had tried the pickled cherry tomatoes and the pickled beets and enjoyed both. I think however that after sampling THREE plates of pickles, there is something that bothers me about the presentation. All of the plates are served the same way: a small glass jar filled with the pickles, and sliced toasted baguette served with olive tapenade and whipped ricotta. Basically, the only change is what is in the "pickle jar." Don't get me wrong, I could eat that ricotta by the spoonful and I'll never say no to a good piece of bread but. Something tells me that the accompaniments could improve. In my opinion, I'd like to see 1) something unique on each plate and/or 2) something that actually can be paired with your pickle of choice. I'm not about to slap a beet or a carrot on a piece of bread, sorry.

Alright, enough complaining- the carrots themselves were quite good! Not your standard pre-cut "baby" carrot, but thin slices of actual small, tender carrots. The pickling process leaves them with a good vinegar flavor that's not too strong and doesn't remove all the fiber in the carrot. While they are on the soft side, they still hold themselves up - no sogginess or mush. I would gladly pay $4 or so just for the jar of carrots, and leave the bread for another time. 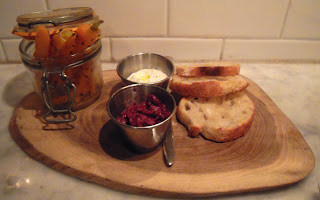 I had a hard time turning down the Chicken-Fried Steak (helllloo), but figured I probably shouldn't completely negate the spin class I got up early for.. so I ended up ordering the Veggie Burger, while the bf ordered the Village Burger (although I know he was eyeing the "Whiskey King"! If the $24 price tag wasn't mostly due to the foie gras topping that would be quite beyond his appreciation of food, I would have willingly gone along...). Personally, even the Village Burger is something I only need to experience once - completely delicious but overwhelmingly MUCH.

I've heard bad things about the Veggie Burger ($8), but decided to give it a try nonetheless. I think, while I will concur on many of the comments I have read about it, it was still well thought out and also well worth the somewhat meager price tag (in my Philadelphia-tainted opinion). The patty itself is composed of lentils and black beans, and is VERY mushy. Pieces of it were slipping out of the bun hardly before I started its consumption. However, since it is a massive amount of filling, it never seemed to make a difference. I have no idea how this patty is cooked but I can't imagine it is made with any high temps - I imagine even a patty of black bean soup would crisp up a bit if seared in a hot pan. It is served with guacamole and pickled red cabbage, and I threw on the tomato slice from my non-vegetable-eating boyfriend's burger, which I would highly recommend. The components of this burger are soft, softer, and softest, and the tomato slice at least gave my teeth something to sink into. The guacamole is delicious- Garces' Latin roots know how to combine the flavors of black beans and avocados. The pickled cabbage escaped me entirely, as it was completely outcompeted by the other existing flavors. I saved half of the burger for my next day's dinner and it was almost exactly the same after 24 hours (unlike many meaty dishes). 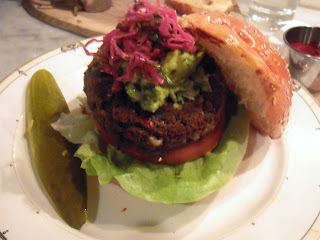 The Village Burger ($9) is quite.. impressive. It was ordered with a few additions of cheddar ($3 - but it's from an artisan cheesery? Did I just make up that word?) and smoked bacon ($2). Completely unnecessary additions, but men seem to have a need to add cheese and more meat to their meat. This burger- both bun and innards- are certainly meant for the hungry, although with the lack of any included side items (minus a huge pickle spear) it helps fill you up without needing to order additional sides (although we did...). J and I often discuss the "bun conundrum" when eating burgers- essentially, the way one half of the bun always seems to magically be consumed at a much faster rate than the other, leaving you with an open-faced sandwich as you make it towards the finish. This burger suffered from another (much better!) bun conundrum- it was simply too BIG for the meat patty. Buttt... I can appreciate an overly ambitious soft, seeded roll (seriously these buns are top notch - they have more of a pastry consistency than a bread feel). The patty itself oozes with fat- literally, a pool of it remained on the plate after the burger was gone. Is this why it tastes so darn good? Probably. Is it worth the clog to the arteries? Once in awhile :) The meat isn't packed very tightly, allowing it to retain a very soft feel in the mouth - the consumer commented that he hardly had to chew, it just swished around and then was swallowed. It's basically meat butter. Yum. Yes, I stole a bite. 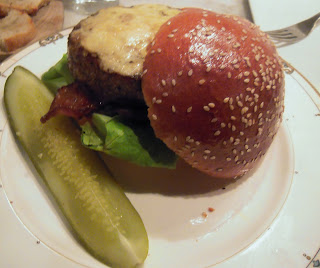 On the side we split an order of Duck Fat French Fries ($5), which were fairly boring. No ducks in sight - the presentation is quite nice as they're served upright in a can ready for the grabbing, and they fit my fry requirements- long, not too skinny, and not too crunchy. However, I just didn't enjoy them. Perhaps it was because of the overload of other food but... we can ignore that fact. You can also order them with a side of cheese sauce or topped with shredded short ribs, but yeah. You have to draw the line somewhere! 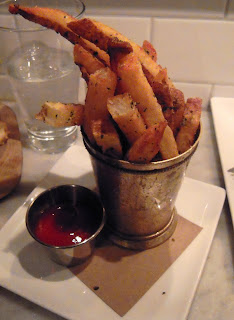 It was a good meal - I appreciate the originality and special touches, even though the menu is fairly limited, and the boyfriend is always content with a good burger. Upon leaving out the side door, I saw a few large tables (for 8-10 people?) with heat lamps which would be great outdoor seating for a larger group. Otherwise, grab a friend or your significant other for one of the most decadent burgers in Philly and a solid date spot.

And as the title of the post may suggest, we may have more Iron Chef burger stories coming your way soon.