In our house, between the two of us, we have semi-constant food "battles." While we are twins and agree on almost everything, there are some things that we are continuously trying to convince the other. For J, it's vegetables. Yes, it may sound strange, but as I am the weekly meal planner and grocery shopping list-maker, she is always reminding me to incorporate vegetables into our meals and to add them to my grocery list (our produce bills are fairly outrageous). I also cook the majority of our dinners (although she has been "promoted" to cooking two nights a week) and I am always proud to serve a large quantity of vegetables, as I know it will fit her description of a balanced meal.

I, on the other hand, am continuously bugging her about different special restaurant meals that are always happening around the city. In any given week, there are usually two or three food events going on in Philly, ranging from multi-course meals revolving around a single ingredient (Iron Chef style!), new seasonal menus at any number of restaurants, collaborations between chefs, and fundraising events that feature dozens of foods. These events can get fairly pricey- for example, our Spinal Tapas dinner last week was $50/head and the 5th Annual Great Chefs Event in June- which raises money for Alex's Lemonade Stand and features Marc Vetri- is a whopping $250/ticket! (No, we're not planning on going...).

This week, we found an event that fit BOTH our criteria- veggie-rific AND a special multi-course seasonal menu. As April 22nd marked "Earth Day", a relatively new Philly restaurant located within Hotel Palomar was offering a six-course vegetarian meal to celebrate. Nearby our house and on "Hotel Row", Square 1682 has been on our radar for several months-- an upscale, intimate spot atypical of your normal hotel restaurant. Apparently chefs believe that diners don't want to pay a lot for vegetables, as the entire meal was offered for $40-- a total steal ($6.67 per course? We're in.). As soon as I saw the menu (on several Philly event sites, including Meal Ticket and Uwishunu), I simultaneously emailed J and made reservations (thanks, OpenTable!)

Our adventures to Square 1682 were admittedly very rocky to begin. Our hostess led us upstairs to the main dining room, and had to move our table to allow me to squeeze in to the bench-type seating. The dining room was nowhere near full- why she chose to seat us between two other parties is beyond me. The awkwardness of the seating arrangements was made worse by the fact that our table had a balance problem- something I pointed out to the waiter upon his greeting, but was never attended to (note to servers: a few napkins stuffed under the short leg usually does the trick). The normal dinner menu was already situated on the table, and our waiter made no signs of introducing the special Earth Day menu to us. However, as we had made plans just for this meal, we asked him about it. He seemed surprised, a bit bewildered, and stammered out an "I'll go get the menu for you" excuse. While we didn't really need to see it (I mean, that's why we made the reservations!), it gave him a moment to get with the program. Amusedly, we watched another dining twosome go through the EXACT SAME motions with our waiter just a few minutes later.

Thankfully, the chef was much more on top of his game than our waiter. The first course began as a Terrine of Asparagus and Petite Carrots. When we think terrine, it is definitely with a mind for pig parts and quite a bit of fat, but this dish was completely beyond our comprehension. We are still unsure what the components of this course were, but what we do know is that it was delicious! A small slice of veggie terrine was paired with a mini side salad composed of raw and pickled vegetables. The terrine was wrapped in what I swear was a marinated mushroom (although J never experienced this), and contained a creamy goat cheese, chunks of crispy asparagus and other various items (J pulled out a golden raisin although I didn't recall a single one!). The terrine was placed upon a pureed blend of sauces, which we loved but were again somewhat stumped by- the menu states it was a carrot and cardomom vinaigrette. 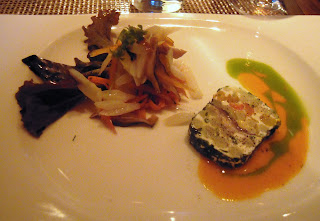 The second course was also very interesting, but ended up being our least favorite. A Spring Pea Soup, garnished with "bleeding radishes", cashew butter, and sauteed onion slivers (maybe...?) was served alongside an assortment of bread. While we characteristically like to receive the bread basket at the beginning of the meal, the late arrival was appreciated as it was a good match for the soup. It included a mix of sesame-seed coated crackers, delicious foccacia, and small flour-dusted ciabatta rolls. The soup was lukewarm- a bit surprising to us, as we assumed vegetable soup would be served cold. The flavors reminded J of stir fry and certainly didn't taste of peas. The cashew "butter" was more like small clumps of soggy nuts that fell apart in your mouth. Overall, while the soup wasn't bad, the flavors and textures just didn't meld together well. When our waiter prematurely removed our soup bowls (based on the mistimed arrival of the third course), we weren't particularly disappointed. 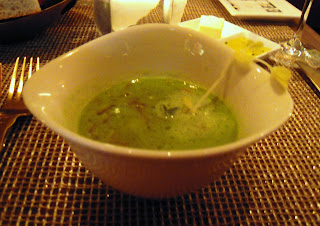 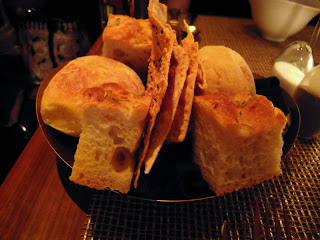 Our third plate was described as a "Petite Vegetable Medley," and although this name makes it sound fairly nondescript and boring, it was anything but. The plating was literally a piece of art and I was sad to disrupt it- but as soon as I did, I began to appreciate the dish as food. A thin layer of cream sauce coated the plate (with flavors reminding me of Thanksgiving- perhaps the nutmeg from creamed onions?) with dots of a red wine reduction adding additional sweetness. Baby vegetables were carefully strewn across this sauce: a mix of marinated, raw, and cooked vegetables offered a variety of textures and flavors, from a teeny baby carrot to a miniature zucchini blossom to an infantile raw sliced radish, all topped with curly strands of crispy green bean. To all of you non-vegetable-lovers, this may sound like a nightmare, but we were somewhat obsessed with both the cuteness of the baby plants and the delicious fresh tastes they offered us. 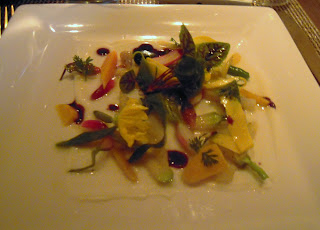 The last "savory" dish was perhaps the heaviest of them all- a mushroom tart that included a good deal of roasted root vegetables. When eating vegetarian (as we do at least 50% of the time), you learn to incorporate root vegetables as a fundamental filler- starchy and satisfying. This dish celebrated the turnip, including a large disc of it in the tart. The outer puff pastry was the perfect encasement for several varieties of mushroom stewed into a thick gravy-like sauce atop the turnip, which itself held a wonderful sour-sweet pickled flavor. The tart also apparently involved Brie (according to the menu), although it must have been lost in the other strong competing flavors. The plate also smelled strongly of earthy truffles, which (thankfully to J, who can't stand the smell or taste) was not apparent to our tastebuds. The tart was accompanied by several other "petite" vegetables, including a yellow beet and an additional chunk of turnip. 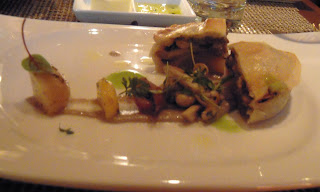 One of the reasons I was so drawn to this menu is the inclusion of not one, but TWO delightful desserts. Yes, we love dessert, and usually incorporate it into our diets after ever dinner (and sometimes lunch, and admittedly, occasionally breakfast). The first dessert of the meal was simultaneously light and satisfying- a Lemon Curd Napoleon served with a pomegranate sorbet. As the plates were placed before us, I couldn't help but again comment about the great deal we were getting- this dessert was definitely "full-sized" and I gladly would have paid $8-10 for it at a restaurant of similar calibur. The lemon curd was nestled into a puff pastry sandwich, along with an almond cream piped in with it. In our opinion, if a dessert does not include chocolate or peanut butter, it better be lemon or berry flavored- and the tang of the citrus fruit was perfectly complemented here by the sugar added in the curd, along with the berry reduction sauce and the sorbet. 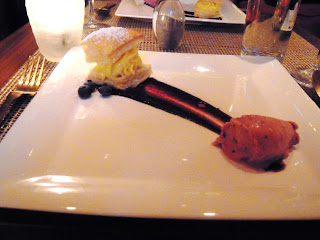 At this point, our bellies were getting quite full (surprise- vegetables are filling!), and J remarked that the last course had better be small. Thankfully, the chef responded with a final course that was both perfectly portioned and completely flavorful- a half-moon of dark chocolate pate with a mound of coconut custard. Again, we were surprised at the "pate," as to us the word signifies a combination of meats and animal fats- much like terrine! However, the chef must have been anticipating our expectations, as he produced a creamy slice of chocolate, which appeared similar to the pate of our pasts. The texture was quite a bit softer- more like a melting ice cream, and it tasted of rich cocoa, particularly when swiped through the melted chocolate sauce underneath. The pairing with the coconut custard was interesting- they sat separated from one another on the plate and really could have been two different desserts. The custard (described as eggless on the menu- I guess they didn't want to offend the animal-loving vegans, although cheese played a role in two other dishes) had a very gelatinous texture and a faint coconut flavor, enriched by toasted coconut flakes sprinkled on top. These bites were also enhanced by the dark chocolate sauce- I mean, what dessert doesn't taste better covered in chocolate? 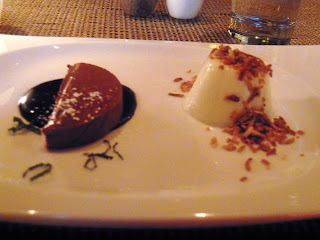 As we savored our last bites, we were quickly heading towards a food coma. Our waiter swiftly brought us the bill and allowed us to slip out exclaiming about the food experience we had just had- artfully plated, adventurous, creative food, but with a healthy twist, served in a classy atmosphere- all for a very reasonable price. While we were extremely hesitant about the restaurant at the beginning of the meal- and still believe the service still needs a bit of ironing- we were very happy that the chef decided to take on such a challenge, and that we were able to enjoy it. While we would probably not return to the restaurant for regular dinner service, if they offer a similar meal for a similar price, we will be back in a heartbeat!