After the mega BBQ indulgence of the last event hosted by Spinal Tapas (some background info found here), A & I kept our eyes peeled (what a disturbing expression) for their next event. About a month ago, they announced the date and we promptly bought tickets ($50 this time, up from $40 for the last event) for the 8 PM seating, which was apparently sold out within 24 hours. This time, the Spinal Tapas crew teamed up with another couple - Brad & Angelique Jennings of Humble and the Rabbit catering- who have recently taken a several week long tour through Peru. Impressed with the cuisine of this area of South America, they were inspired to recreate some of the dishes that they had tasted throughout the different regions of the country. This was the starting point of this Peruvian themed edition of Spinal Tapas. Additionally, Peruvian cuisine has such a wide range of influences (African, Arab, Chinese and Japanese to name a few) and they use a number of ingredients and cooking techniques, all of which contribute to an interesting culinary experience.

I was glad to see that the very cramped Philly Kitchen Share space was used more efficiently this time, with multiple tables that allowed us a little more space than the previous single "cafeteria style" table- a little more "restaurant" and a little less "party". Our tablemates were friendly and surprisingly, none of them were actually from Philly, so it was great to see that the word has really gotten out throughout the region (NJ, Delaware and beyond). 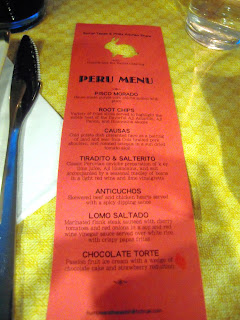 While we waited for everyone to arrive, we munched on a bowl of chips served family style with three different dips highlighting different peppers from Peru. The chips were made from a variety of root vegetables- purple potatoes were the only ones that I could specifically identify, but there were probably some regular potatoes in there as well as something a little bigger (yucca?). The fact that the kitchen has an industrial sized fryer definitely needed to be taken advantage of, and these chips were delicious- very thinly sliced and perfectly crispy with a touch of salt. The sauces each had a unique flavor with a spectrum of colors and heats. It was a great intro to the meal- something crunchy to snack on and initiate the tasting process. 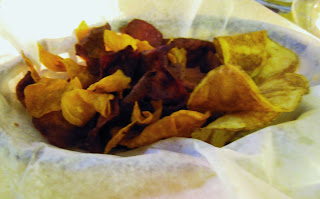 The first dish to come out also featured potatoes, which are apparently an important component of the diets of many hard-working Peruvians living in the more rugged mountainous regions. Called "causa", this popular Peruvian dish is essentially a cold potato puree (using a very yellow potato variety) topped with any number of meats. This was a "surf & turf" version, one with octopus and one with pork. The octopus was grilled, chilled, and then coated in a spicy mayonnaise-y aioli. With a firm texture without a hint of the rubbery-ness you sometimes get with calamari, the octopus was a great complement to the creamy smooth potato. Because I'm not a huge fan of mayonnaise, I would have loved the sauce to be a little lighter to get more of the fresh grilled seafood flavor, but it was still delicious. The other potato blob was topped with a pile of pork shoulder and a mini crunchy onion slaw-like topping. The ST guys have already proved their ability to make a delicious pulled pork, so I was excited to get another little taste of this. However, this version was a lot lighter, as it was of course lacking the tangy BBQ sauce and instead had more of a vinegary peppery taste. Again, a good textural complement to the potato, which reminded me a little of Thanksgiving leftovers (cold mashed potatoes?) Overall a totally new dish that made our mouths very happy and eager to move on to the next course. 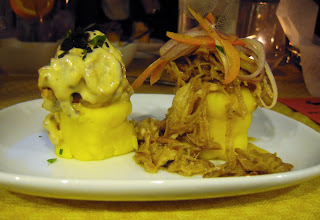 Another very popular Peruvian dish is ceviche. Although this style of cooking seafood has been popularized in a variety of cultures, A & I have never been huge fans- partly because we prefer a good cut of fish served raw, partly because the citrus flavor usually tends to be totally overwhelming, and partly because it never turns out to be a good investment (too much $$ for too little enjoyment). The next course was a Chilean Sea Bass ceviche- "cooked" in lime juice and then smothered in one of the initial sauces we tried. However, the lime juice won again- it was the only thing I could taste. The texture of the fish was amazing- a huge meaty chunk that somehow seemed to melt in my mouth. But the lime juice! Not cool. The ceviche was served with a spoonful of a little bean salad with bits of ricotta salata and peppers tossed in a red wine vinaigrette- simple and refreshing. 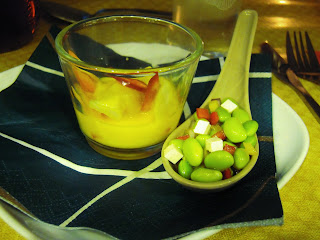 While we ate, Brian cooked up the next course in big pans on the stove behind us- marinated hearts! Both whole chicken and slices of beef hearts were sauteed up in a little bit of their marinades and then skewered on cute little bamboo sticks and served with a thin herb-y yogurt-y sauce. You might be totally turned off by the idea of eating hearts, and A even was a little disturbed when I bit a chicken heart in half and pointed out the different ventricles and atria (the heart walls were surprisingly thick!). But really, the heart is a muscle. And therefore it is delicious. The two hearts were actually very very different- the beef pieces were sliced up (therefore eliminating any fibrous valves) and were a much darker color with a thicker chewier texture and richer flavor (my preference of the two)- perhaps a tiny bit like beef jerky? The chicken hearts were served whole and seemed a little softer and smoother, a little more like regular chicken (A's preference- she claims the chewiness of the beef just made her think of blood and then she started tasting blood... probably not enjoyable). Definitely the first time we'd tried this "delicacy"- something different and good! The accompanying sauce didn't do much for us- a little on the thin side without a whole lot of flavor to contribute to the juicy meat chunks. A actually used one of the sauces from the chips and it made for a tasty little bite. 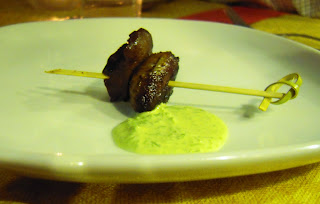 While a seemingly endless number of these were passed around the table, Tim worked on the entree- undoubtedly the highlight of the meal. Using the impressive grill in the kitchen (and testing the competence of the exhaust fans!), he grilled up the most amazing flank steak that I have ever had. Marinated for "at least 48 hours", the meat had beautiful dark grill marks on the outside while still maintaining the perfect amount of red in the middle. Incredibly tender and flavorful, the meat was served with a cherry tomato, yellow bell pepper and onion concoction over fluffy white rice and accompanied by what could only be called "potato puffs". Whipped potatoes rolled into perfect round bites and deep-fried to create a thin, smooth skin around the so-light potato. After I popped the first one in my mouth, my initial response was "I'm going to need 8 more of these!" French fries + mashed potatoes = delightful. The whole mess was topped with a spoonful of herbed butter and some Thai basil- a great flavor addition for the rice at the bottom. With so many amazing components, the dish came together perfectly in every category of flavor, texture, and presentation. 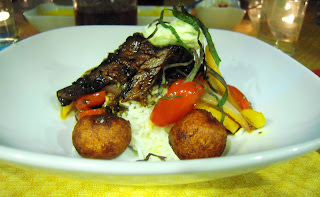 When I didn't think I could be any more impressed, dessert was served. Angelique was responsible for this dish, and her cooking skills did not disappoint. A thin slice of the richest densest chocolate cake you can imagine with the perfect hint of coffee- it was one of those things where one bite had your eyes rolling back in your head. It was served with a scoop of homemade passion fruit ice cream- so creamy, not too sweet, an exotic jungle-y fruit flavor... also so good. A & I kept taking a bite of one and then the other, we couldn't decide which one was better (what do you save for your last bite?!?!)- the thickness of the cake was cut by the cool melty-ness of the ice cream and the flavors really worked so well together. 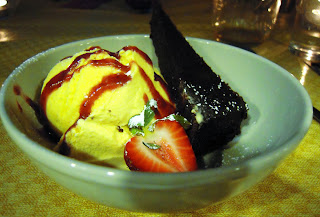 Although there is really no way I can compare this with the last ST event, one good thing was the fact that I didn't have to roll myself home. The flavors and ingredients were top notch and not intended for mass consumption. Last time I was struggling to make room for the last couple courses which is not the funnest thing in the world and possibly detracted from overall enjoyment. This event was the perfect amount of food- not too much, but we both felt perfectly satisfied as we left.

The next event has already been scheduled and unfortunately is on a Friday in the midst of our month of craziness at school, but if you live in Philly, definitely keep the Philly Kitchen Share website on your "frequently checked" list to sign up when they open it up for tickets!
Posted by Julianne at 4:49 PM