After postponing our trip to check out Bobby Flay's new Philly establishment, A & I decided to meet midweek after work- on Penn's campus, it was a bit of a hike for me, but I guess A makes the trip every day... We'd heard from several friends that the line can be quite long, so we figured it might be a bit quieter during the last week of undergrad classes. Fortunately, when we arrived at the neon-lit mecca that is Bobby's Burger Palace, the line wasn't out the door as it was on our last encounter. We actually timed the wait which started right at the door and snaked through the entrance area up to the cashier counter- 22 minutes, not TOO terrible.

As we waited, we perused the giant menu on the wall, which isn't all that extensive. Typical "fast-food" options: burgers, grilled cheese, fries, shakes, and drinks. The burger options are actually kind of fun, with plays on Cuban and pulled pork sandwiches. In order to maximize our coverage of the menu, we ordered the Palace Classic Burger as well as a more interesting option.

The setup of the restaurant is a little bit fast food joint, a little bit bistro, and a little bit 50's diner. Very bright lighting and paint colors with curving tables along the kitchen and a couple of long tables with attached seating (no squishing your group together by moving chairs around). You essentially just sit wherever there is an open spot, which didn't seem to be much of a problem as the single cashier system keeps the timing about right. However, there was one guy standing and eating next to his group of friends- obviously more difficult to seat a larger group together.

Almost as soon as we sat down, a friendly server came over with our Vanilla Bean milkshake ($5). Food comes out as it is prepared, so a group's entire order does not arrive simultaneously. The milkshake was on the small side, but it was fine for us to share just to get a taste. I'm a huge fan of anything that claims to contain vanilla beans, and this milkshake was chock full of them, giving it a taste on the "vanilla extract" side of the spectrum. It was very thin, like a cold vanilla milk drink, yet it was still served with a spoon which seemed a little awkward. I thoroughly enjoyed the flavor but I think they could increase the thickness considerably. 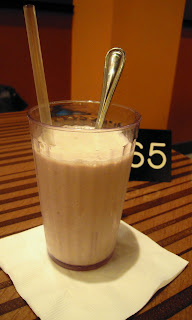 Another comment on the food delivery service- the small numbers that you are given at the cashier seemed difficult for servers to see- there was a lot of wandering around and peering over shoulders. I'm not sure how this could be improved but it seemed like a tedious job to do!

The rest of our food arrived at the same time (milkshake appetizer?) and definitely gave us a lot to comment on. A had ordered the Palace Classic ($7.50), no red onion, plus pickles, and Crunchified. This clever (and free) option adds a big pile of regular potato chips (Lay's?) to the sandwich. With this addition, the burger was a good 6 inches tall, held together with a toothpick. As I was snapping the pic, I realized that I couldn't even see the meat. NO meat?? Fortunately it was actually there, hiding under a slice of processed goodness (American cheese) and an abnormally large lettuce leaf. The bun was substantial without being overwhelming and was .completely covered in sesame seeds- literally no uncovered space on the top bun- quite an impressive feat. Thankfully the chips gave way to a good smooshing, but the height still required jaw-pain-inducing bites. Overall the burger was pretty good- the meat flavor held up against all those other toppings, and the crunchy chips were a good textural change to the usually soft meat/bun combo. Well cooked, if not a little more on the medium side than medium-rare (Craig LaBan had words to say about that), the cheese was melty and the toppings fresh. Definitely nowhere near the flavor explosion that is the Village Whiskey burger, but certainly a decent burger. 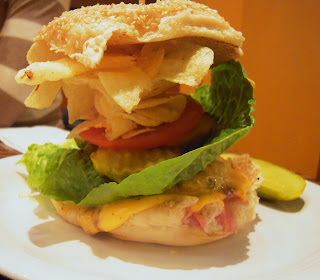 I opted for the Napa Valley Burger: fresh goat cheese, watercress, and a Meyer Lemon Honey Mustard. I was interested to see how these more "upscale" ingredients would be put into play. When the burger was placed in front of me, I literally started laughing. Expecting at LEAST a small tuft of greens, I instead was confronted with a tiny sprig. I picked it up and popped it in my mouth in one bite- not even worth having on the burger. And it's not like the kitchen was having some kind of Wednesday night watercress shortage- a friend also commented to me about the pathetic quantity of watercress that she encountered. The meat in my burger seemed closer to the medium-rare that I had requested, so perhaps the kitchen is getting more experienced in the meat cooking category (try it again LaBan!). Overall the highlight of the sandwich was the goat cheese- they somehow whipped it up in a fluffy creamy texture- SO GOOD. However, goat cheese has an insanely strong flavor, and I really don't recall any Meyer lemon or even regular mustard flavor coming through from the sauce. Again, besides the (somewhat serious) watercress issue, another solid burger. 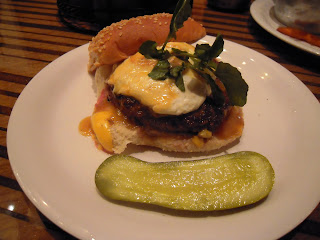 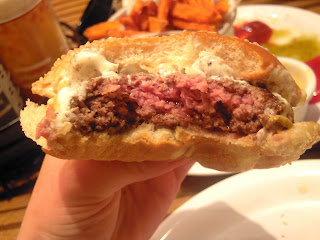 We also ordered a side of sweet potato fries ($3). This was probably the only menu item appropriately priced- a large-ish metal canister filled to the brim with firm yet crispy slices of hot sweet potato. These fries managed to maintain their delicious sweet potato taste instead of turning into a grease flavored mush. I liked the cut- sort of a rectangular stick perfect for dipping. And dip we did- we tried all of the sauces that are available in squeeze bottles on all of the tables. The sauce served with the fries was exactly what it was called "horseradish honey mustard". Sounds good, right? Not really. The sweet of the honey mustard was almost cloying alongside the bite of the horseradish. Not a good combo, and not a good addition to the already perfect-all-on-their-own sweet-salty fries. The chipotle ketchup also tasted exactly like you might expect- but nothing special. The "burger sauce" was this dark brown substance that I sort of expected to taste meaty (like Worcestershire?) but was totally disgusting- a gritty molasses flavor mixed with concentrated brown sugar... way too sweet and just.. not good. There was also some sort of jalapeno sauce that had a decent flavor but was just really really thin. We stuck with the normal ketchup and yellow mustard- the Iron Chef REALLY dropped the ball in the sauce category. 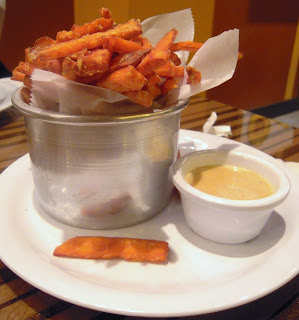 The experience was an overall "so-so". It seemed overpriced, crowded with college students yapping about who-really-cares-what, and there were a lot of relatively large oversights in the execution. Service got 4 thumbs up though- everyone was so sweet and eager to please, unlike some fast food places where customer service is meaningless. If I was in the area and in the mood for some goat cheesy fluff covered meat, I might stop by, but otherwise there are better places to spend my money.. and time!