If you are anything like we are, you have fond memories of many a dish from dozens of breakfasts, lunches, and dinners past. These meals dance in your mind when the memory is sparked, your mouth begins to water, and you contemplate heading to whichever restaurant served that dish as soon as possible (or gathering the ingredients to make it, if it was one of your own). And sometimes, these dishes highly influence your decisions on what to order at a completely unrelated restaurant. Yes, I AM going somewhere with this.

J and I had plans to make an end-of-the-week visit to the recently opened Bobby's (Flay!) Burger Palace on Penn's campus, but with Spring Fling in full swing (haha!) and Penn kids out in full force, the out-the-door line dissuaded us as our stomachs were grumbling for some food sooner rather than later (don't worry, Iron Chef Burger Tour Part 2 has been rescheduled!). Instead, we headed back to our part of town to check out another restaurant on our list (yes, we do actually have a list).

Ladder 15 opened in the past year or two in a refurbished firehouse on Sansom Street. J and I checked it out right when it opened (I distinctly remember the smell of fresh paint still heavy in the air), and while we liked the food at the time, had heard bad reviews as the restaurant began to turn away from its emphasis on food and began to morph into a "fratty bar scene". With too many other good places to eat in the city, we were perfectly fine with not returning.

However, earlier this year, it was announced that a now-restaurantless David Ansill (formerly of Pif and Ansill) was being hired as chef at Ladder 15 to begin a clean-up of the menu and bring big name star power to help refocus the restaurant. While I've never been to either of his former restaurants, J experienced Ansill last summer and was a bit disappointed when it closed (Ansill blamed the economy).

The restaurant is a huge, open room, with super high ceilings, lots of dark wood and candles, and somewhat of an industrial feel. We were seated immediately (seating is reserved for those eating, while people coming to partake of the bar scene must stand), and attended by a competent but fairly non-interactive waiter. Upon reviewing the menu, we realized our interests lay more in the appetizer section than the entrees, so decided to order a variety of items to share. We also realized that the menu didn't offer much in the "health" category (minus a few very uninspired salads) so decided to enjoy a bit of a weekend splurge (as we often do).

We selected four items: Beer-Battered Rock Shrimp, Fried Cauliflower, Polenta Fries, and the Korean Tacos. Hmm, my arteries are clogging just typing that! The food didn't take long but was delivered in one giant rush, crowding our small table and making picture taking a bit of a feat. We know we ordered mostly appetizers (the Korean Tacos are considered an entree), but that doesn't mean we want to eat them in one swoop. For a group of people coming to enjoy some late-night munchies, fine, but we were there for dinner!

The rock shrimp ($9) were my own selection. Whenever I see the words "rock shrimp", I am instantly transported to another time and place (specifically 2006 and Morimoto) where I enjoyed one of my favorite seafood dishes to date- the rock shrimp tempura with spicy kochujan aioli (a whopping $18, but everything in that restaurant is outrageously expensive, although I argue that this dish is very well worth it). At Morimoto, the shrimp are lightly battered and then tossed in a spicy, mayonnaise based sauce and served steaming hot. They. Are. To. Die. For. In my Morimoto memory induced fog, I needed to try Ansill's version. I have to say, while they were good, this was just not anywhere close to what I was craving. Ladder 15's version is heavily battered- while the crispy fried shrimp shells were flavorful, they were a bit overwhelmingly greasy. The inner shrimp were large and firm enough to really bite into, but a bit on the "shrimpy" side, a sign of previously frozen or past-its-prime seafood. The redeeming element was the sauce served on the side- described as lobster roe mayo, but really more like the spicy sauce that I always order with sushi. Creamy, a hint of spicy heat, overall a good match for the shrimp. 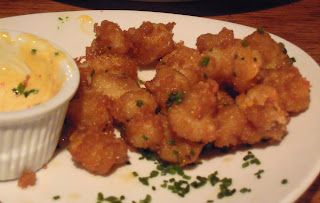 We have experienced fried cauliflower on several occasions, but our favorite rendition was at Michael Solomonov's Zahav. This Israeli restaurant is fairly well-known for this dish, and we were big fans- small morsels of crisp cauliflower, not too greasy, laid out on a yogurt sauce spiced with chive, dill, mint, and garlic ($5 at Zahav). There is a reason why this was named one of the Best Restaurant Dishes of 2008 by Food & Wine magazine! Regardless, again, we were hoping to find an inspired reincarnation of this dish in the hands of Chef Ansill. Once again, our memories will still return to the former version. Ladder 15's take ($7) involved large chunks of the vegetable, fried a bit too heavily, and served with an olive-oil based sauce on the side. We are cauliflower fans, so minus the grease-factor, we enjoyed the warm, soft bits on their own. At Zahav, the sauce is critical for the dish to come together; at Ladder 15, the sauce went untouched. We found dipping an oily food into OIL was not going to do anything to increase its enjoyment. Overall, I'd be just as satisfied with plain steamed cauliflower made in my own microwave- plus, it would be way cheaper! Note to Ladder 15: we know cauliflower isn't expensive. Don't imitate a master, fail, and charge more. 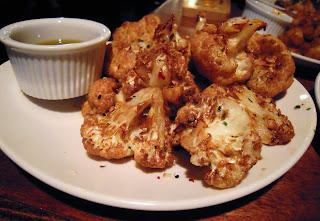 Moving onto the polenta fries- yes, we are fans of polenta! (We hope you enjoyed our last post). We have discussed making polenta cakes in the past- as cooked polenta cools, it thickens and solidifies to the point where it can be sliced. These slices can then be pan-fried to a crisp. One of our favorite brunch memories involves just such "fries" at Sabrina's Cafe- they serve huge slices of the stuff with a lovely tomato sauce for dipping as an optional side to any dish ($4.29 as a side dish). The rendition served at Ladder 15 ($6) was just as enjoyable, or perhaps even more so! A stack of crispy polenta chunks is served atop a spicy tomato sauce and dusted with curls of fresh Parmesan cheese. This plating allows the sticks to soak up some of the tomato sauce, instead of having to awkwardly dunk them, and the cheese offers a salty, flavorful kick. The fries are cut a bit thinner than at Sabrina's, allowing them to have more rigidity. They were perfectly cooked, with a light skin of crispness encasing smooth, warm innards. Yum! 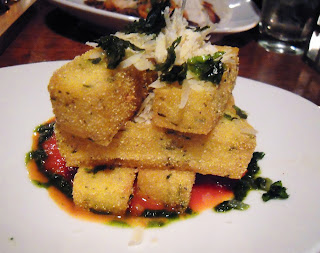 Our favorite dish of the night was J's pick- at Ansill, she had eaten the famed Korean tacos, and these were her main reason for disappointment at its closing. As this was the new chef's specialty, there was no reason for him to fail on this dish- his creation should be the same regardless of which kitchen they are prepared in. And surely, they lived up to our expectations. The "entree" is served with two tacos ($11), and no sides-- which surprised me. They would be well-paired with a cool coleslaw or fresh veggie mix, bulking up the plate and forming it into a real meal. However, the tacos are well worth their price tag alone. Both tacos are different but retain similar flavors- one is filled with pork belly, and the other braised short rib, then both are topped with kim chi (spicy pickled cabbage, Korean-style), scallions, and sesame seeds. They are served atop medium-sized grilled flour tortillas- warm, with heavy grill marks yet still soft and malleable. The two meats are rich and delicious, literally oozing flavor. The short rib is shredded, extremely moist and really, just perfectly flavored beef. The pork belly is somehow both crispy and soft (with its layer of fat clearly evident, but we couldn't care less after biting into it!) and exemplifies why this meat has exploded in popularity recently. Both meats are complemented by the spicy kim chi, and the soft tortillas do an excellent job of encasing all of this goodness, providing a soft bite without overwhelming the true gems of the tacos- the meat! Extremely well done... Ladder 15, you did a good thing by hiring David Ansill because of these tacos alone. 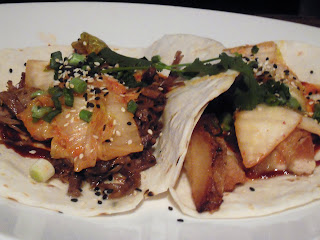 As our meal mainly consisted of appetizers, we were satisfied but not stuffed at the end of our meal, and we were also happy that it was relatively inexpensive (allowing us to reason ourselves into a more expensive dessert on our way home). Our plans may have been changed due to the popularity of burgers during Flingtime, but we were glad to experience the "new" Ladder 15. Each of our selected dishes were recreations of foods we have enjoyed in the past, and while they were not always spot-on with what we have previously eaten, we know we would be reaching just a bit to expect that. And who knows, perhaps my craving for tempura rock shrimp will just have to spur a trip to Morimoto!