One of the best parts of my work day is eating lunch (obviously- its food related!). All the lovely ladies who work in my lab (and one of the guys if he's feeling up to the gender ratio discrepancy) take a break to eat and catch up on non-science related topics. We usually check out what everyone is eating- lots of "ooh what's that?" and "Where did you get that?" fly around the table on any given day. A few months ago, a large quantity of homemade banana pudding was passed around the table, and I immediately knew I needed to get the recipe and make my own batch.

The recipe originates from the "More From Magnolia" cookbook which itself originated from the Magnolia Bakery, made famous (at least to me) by this video. I've had it in my possession for quite some time, but was a little sad because I realized that in order to make the true recipe, I needed an electric mixer to hand make whipped cream (no Cool Whip here, thanks). A & I have been building our kitchen gadget collection for several years now, but we've somehow bypassed the need for a mixer... until this recipe landed in my inbox. I had to take a quick trip to Kitchen Kapers for a baking sheet and promised A that I would pick up a mixer "if they're not like, $50." And what do you know? The two options they had available were both $49.99.

A few weeks passed and the creamy deliciousness of the banana pudding kept popping up in the back of my mind. Unfortunately, the lack of a car in this city makes it a little difficult to make a Target run for cheap kitchen appliances. However, an even better opportunity arose... the parentals came for a weekend visit. As always, our wonderful mom asked us if we needed anything for our place (no visit is complete without them making some appreciated addition to our condo). I mentioned that I was in need of a mixer, and sure enough, we returned home from work to find a mixer in one of the kitchen cabinets. So this banana pudding is with very many thanks to our mom (Happy Mother's Day, Mommy!) 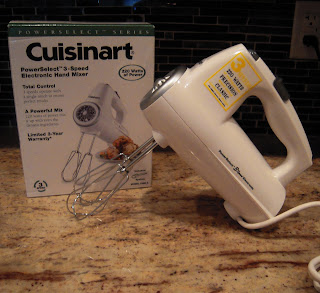 Fast forward several more weeks till now. A & I picked up the necessary ingredients at Whole Foods, so this was a mostly organic and more expensive version of the pudding. To make a half sized batch of the pudding (serves six) you will need: 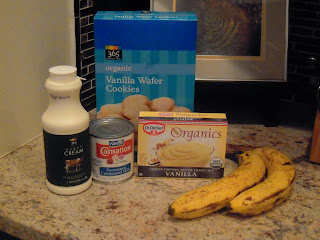 The recipe starts out with instructions for making the pudding. My experience with making instant pudding usually just involves the mix and some cold milk, but in this case you replace the milk with water and sweetened condensed milk (which is essentially caramel). Because my Whole Foods pudding wasn't instant, I mixed together the ingredients and popped the bowl into my fridge, setting a mental 4 hour timer. However, when I came back to complete the recipe, my mix had separated into a thick sugary sludge on the bottom of the bowl with a totally liquidy layer on the top. Not pudding. Insert lots of frowns and muttering about organic pudding mix.

Thankfully, since I had halved the original recipe, I had saved the other half can of my milk and the other half of the box of pudding. This time, I took a look at the instructions on the box of pudding. The box directed me to heat the mix with milk, so I again replaced the milk with the water/s.c.milk mixture and brought it up to a boil, whisking rapidly during the entire process (I wasn't risking another screw-up!). 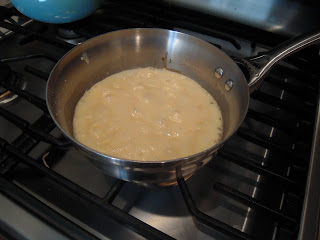 It did seem to thicken up a bit, and the box promised it would continue to thicken further during the four hour refrigeration. It also gave the helpful hint of placing plastic wrap over the top to prevent a "skin" from forming. I definitely wanted to avoid any type of skin, so I covered the bowl, put it in the fridge and set yet another mental timer. I also realized I needed to chill a bowl for future whipped cream making, so I put yet another bowl into the freezer (glad we have an extensive bowl collection!) 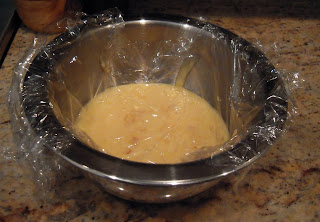 Four hours later, my pudding seemed to be a regular pudding consistency, so I whipped up the heavy cream (and perhaps took a small sip or two... liquid butter... so good). I'm not an expert in making whipped cream as I make it about once a year, on Thanksgiving to go on top of freshly baked pumpkin bread, one of our moms truly perfected creations. However, the recipe called for "soft peaks", which formed after just a few minutes with the mixer. Easy enough. 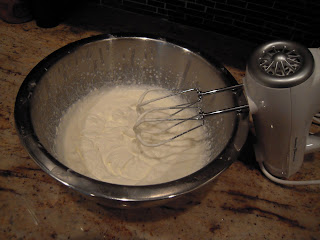 The next step is to fold the pudding into the whipped cream (use a spatula). The ratio seemed way off- small bowl of pudding into large bowl of whipped cream doesn't equal pudding, at least by my math. However, it was what the recipe called for, so I rolled with it. A helped me chop up the bananas and layer them with the pudding and the cookies in yet another bowl, though you can use any deep-ish dish. The recipe specifically directs that the layered concoction NOT end with bananas, as they will brown, so my layers were: cream, bananas, cookies, cream, bananas, cookies, cream, crumbled cookies. We covered this bowl and put it in the fridge to let all the flavors meld together cookies get soggy, and headed off to dinner. 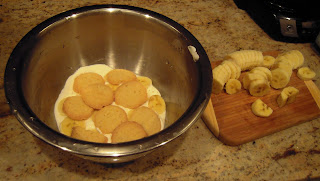 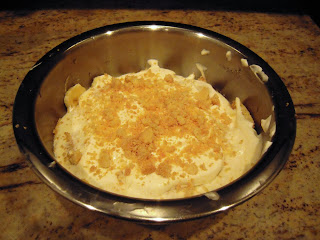 A couple of hours later, the pudding was ready to be eaten (finally!). As a warning, the creaminess from the heavy cream and the sugaryness from the sweetened condensed milk makes this a VERY rich dish. We each had a small bowl of it, and by the end I felt a little overwhelmed by the intensity of it. However, it is a perfect summer dessert and we HIGHLY recommend it (great option for a make-ahead dinner party dessert as well- you'll knock the socks off your guests!) Next time I will try to use instant pudding to avoid the issues I had (and to save about 8 hours of time...). However, the "vanilla wafers" we got at Whole Foods were actually more like shortbread cookies, and they were a unique change-up to the more boring "Nilla Wafers" you usually see in banana pudding. Also, make sure to use super ripe bananas- it makes for a better flavor AND texture. 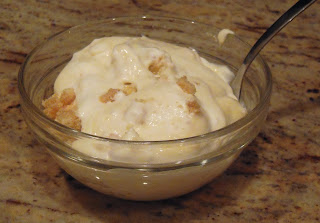