After some reader comments about "measly vegetables" in our last weeks CSA half-share, A & I are pleased to say that this weeks share was a little more exciting.

In this weeks box we received the following: 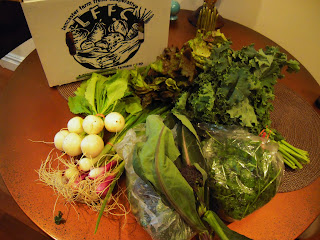 This box had THREE new products that we've never had- turnips, purple broccoli, and watercress. When I was unpacking the box, I actually opened the bag of watercress, forgot what had been on the list, decided it was parsley by appearance, ate a piece and found it to be spicy, like an intense arugula. Additionally, the red leaf lettuce was covered in mud- I had to break it apart, wash and dry each leaf, and store the whole bunch in a plastic grocery bag. Unpacking a CSA box is like a little mini-adventure.

When the folks at LFFC send the handy list of what we're getting, they also suggest uses for some of the items, which provides another source of inspiration. One of the suggestions for using the cress was as an accompaniment to egg salad. A and I have never made egg salad, but we do have a source of incredibly delicious farm fresh eggs- I've mentioned them before. Making egg salad seems easy enough, so we opted for egg salad sandwiches with cress on toasted wheaty bread. The bread is something we used to eat growing up- it's packed full of bits of seed and grains, including cornmeal. Though Dad used to buy it at Sam's Club, Trader Joe's also sells it and it is amazing. A made the egg salad with celery, Dijon mustard, chopped spring onions, and a Greek yogurt/mayonnaise mixture. The eggs are so rich as they are, they don't need much mayonnaise- we think Greek yogurt makes a protein-rich, creamy substitute. With a handful of spicy watercress and a bit of crisp to the bread, the egg salad was DEEE-licious. We also made up a side salad using some of the red leaf, dried cherries, a little blue cheese and some sunflower seeds. A perfectly delightful Sunday dinner. 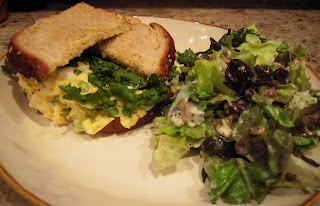 A few months ago we had a really good broccoli salad at a friends place- A and I don't typically like raw broccoli (A associates it with a puking incident when she was much younger), but the mix of crunchy broccoli with other flavors and a touch of mayonnaise (a common theme in this post...) had us going back for seconds. The purple broccoli in our share gave us a good excuse to try to recreate this dish. Purple broccoli comes in a much smaller head than regular green broccoli- we got about 6 of them and it still didn't seem to add up to a normal broccoli head. Additionally, the tiny tips of the broccoli are a little bigger on the purple variety. However, the taste is exactly the same; I thought it was a bit milder, but this may be attributable to its freshness.

To make the base of the broccoli salad you will need: 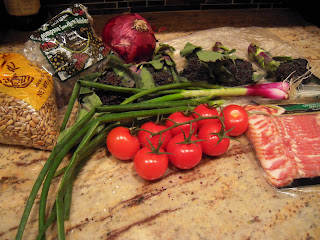 The first step is to cook the bacon- I did this while I began assembling the rest of the ingredients. Chop up the broccoli into small pieces. A & I enjoy eating broccoli stems, so I added those to bulk up the meagerness of the heads. Chop the green onion, the tomato, and the purple onion. Add everything in a bowl, throw in the seeds and raisins, and crumble your bacon on top (once its super crispy and cooled). Because our broccoli came with so many leaves, I used the leftover bacon grease to saute some of them to add to a salad for tomorrow's lunch. We really like utilizing all parts of our vegetables! 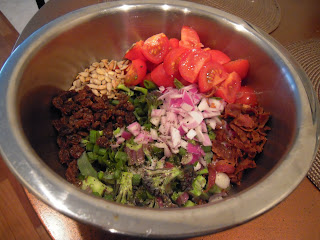 The "sauce" component of the salad is super easy. Mix together: 1 T sugar, 1 T apple cider vinegar, 3 T mayonnaise, and 3 T lowfat sour cream. Again, we like to supplement the mayonnaise with something a little healthier. We do use mayonnaise made from canola oil, which is much better than "real" mayonnaise, but adding yogurt or sour cream makes it a little lighter and less greasy. I mixed everything together with tongs and popped it in the fridge to cool for a bit. 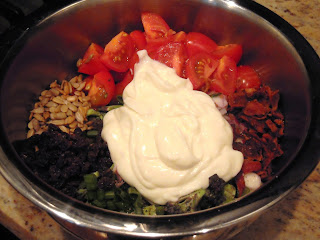 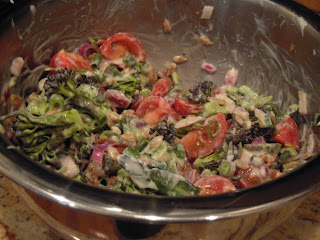 I served this up with a big baked sweet potato for each of us- A likes hers with hot sauce, a little sour cream, green onions (these things are SO versatile!) and some grated cheddar. I prefer mine sweet with goat cheddar, cinnamon, and brown sugar. Either way, the starchy sweet potato was the perfect addition to a big pile of broccoli salad. The salad would also go well over a grain or with some grilled chicken.

A plans to make braised kale and turnips tomorrow, which should use up the last of the produce from this week's box. We're really enjoying how the items are inspiring us to not only try new vegetables, but also new recipes. Hope we've inspired you as well!
Posted by Julianne at 8:33 PM