A & I are always inspired to try to find the little niche restaurants that are often overshadowed in a city like Philadelphia. We have our favorite place for calzones (Gusto) and our favorite place for pitas (Hummus) and our favorite place for Mexican food (MadMex)- places that don't get a lot of attention because they don't have big name chefs or a fancy menu. Maru Global recently opened near Jefferson and offers a totally unique cuisine in the "hole-in-the-wall" setting that so often gets overlooked. Advertising "All-Natural Fast Foods Inspired by Japanese Street Vendors", this place definitely had our attention.

Although it hasn't gotten many good reviews, we knew that these were mostly complaints about the lack of atmosphere as well as the fact that the food wasn't a good replica of true Japanese food. As atmosphere is really what you make of it, and we've never been to Japan, we kept an open mind. Reminiscent of your average sushi shop, there were a few tables. However, the majority of the space was taken up by the open kitchen and a big case of premade food as well as lots of really fresh looking vegetables and a variety of Japanese beverages and packaged snacks. The menu is designed for take-out, so we were essentially getting take-out food and eating it inside the restaurant. 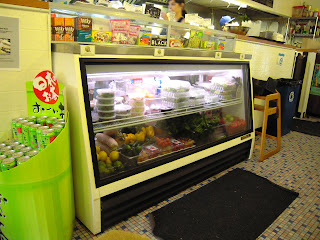 We started out with a couple of the "small" salads (other "big" salads are also available). Our first choice was the octopus salad ($2.99). This was served to us right away since it was literally just taken out of the case and put on a tray. The portion was incredibly small, with each of us getting a few bites of greens tossed with shredded carrot, spiralized cucumber, noodles of daikon and a small blob of a dark green Wakame seaweed. Decent mixture of ingredients, but it was just... so small. And the octopus was literally one piece that I had to bite in half so A could try it as well. In its defense, it was actually very good. Cold, but with a firm texture and subtly meaty flavor. The dressing served alongside the salad was a little too mild to provide any real contribution. I know I shouldn't expect much from a $3 salad but... I wasn't too impressed. 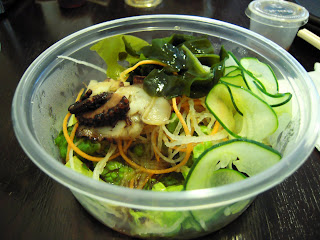 We also tried the seaweed salad ($2.99). One of our favorite bloggers has recently touted the health benefits as well as the interesting flavor of sea vegetables, so I wanted to take the opportunity to try out several different types in one go. This salad had three different kinds of seaweed, and I suppose in this case the quantity was just right for a little taste-test (but not for if you're hungry!). The three seaweeds had varying colors and textures- different levels of crunchiness versus a more slippery feeling. I ended up enjoying the dark green one the most- it reminded me of my typical greens with a little extra saltiness. A enjoyed the light green one as it had the most crunch. The dressing for this salad was advertised as "sweet" but it was made with a good amount of sesame oil, giving the seaweed another dimension of flavor. 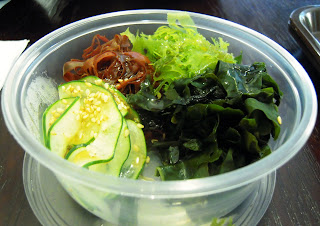 Although there are a few noodle and rice dishes, we decided to primarily focus on the "Takoyaki" portion of the menu. Also called "maru balls", these dishes are described as bite-sized crepe balls with various fillings. There are three serving sizes, but as we wanted to try a number of the flavors, we ordered the smallest size (6 balls for $3.25). Of course we had to try "the Original", which we ordered with an octopus filling. The balls were extremely light and airy with almost no crispiness on the outside, probably due to the way they are cooked. The octopus was practically non-existent, but the general flavor was good, thanks to the sweet sauce that was glazed over the top. The balls were also covered in a pile of shaved bonito flakes which looked and tasted like weird flaky wood chips- we scraped them off after the first taste. 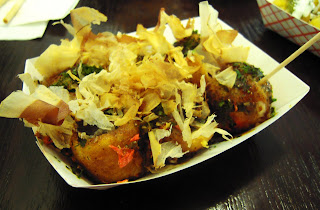 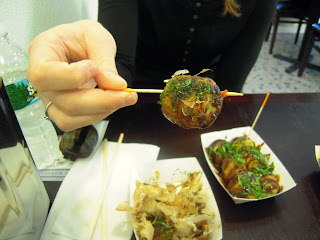 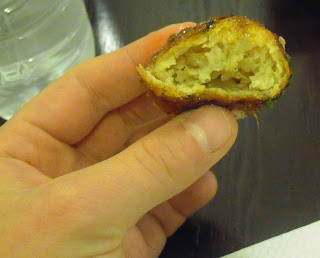 The second type we tried was the Spicy Shrimp. This was essentially a spicy shrimp sushi roll in maru ball form. Replace the dense rice with a fluffy sweetish dough and that was what this was. Because we enjoy shrimp, and spicy sauce, this was a hit. They weren't overly greasy at all- even though its cooked in oil it really was just a lighter version of a spicy tuna roll... This was actually a problem, however, because the food just wasn't in the least bit filling. 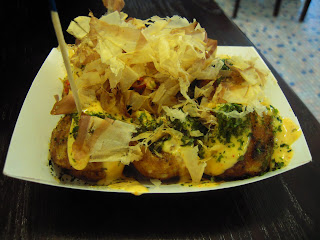 The densest of the choices was the "corn and salsa verde balls" ($5.99). We love cornbread, and these really had potential. Made with cornmeal and covered in a mildly spicy green salsa and a dab of creamy crumbly cotija cheese, we tried to appreciate these as much as we could. However, we really love a gritty cornmeal, and this was probably made with masa, or a finer powdered form of cornmeal. It made for somewhat of a mushy texture- definitely needed some more time in the pan. Also, for twice the price of the balls with meat, but without meat, we're still scratching our heads over the pricing tactics... 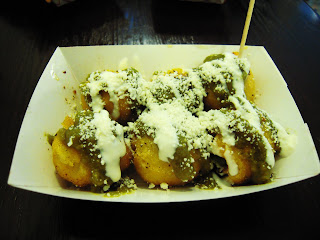 The last choice was BBQ chicken. These were probably the favorite of the bunch, which may or may not be based on how much we love BBQ. The sauce was definitely on the sweeter side, but still had the tangy vinegar flavor that makes a great sauce. These seemed to be a little crispier on the outside, while the airy middle made a great capsule for shredded chicken and sauce. 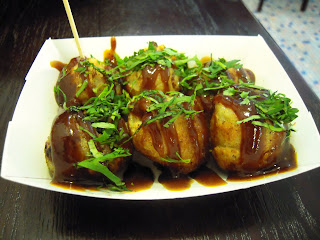 When we first placed our order, we asked the server if it was an adequate amount of food for two people. She definitely made it seem like we were on the "too much" side of the spectrum, but this couldn't be further from the truth. Because the balls have so much space inside, they aren't at all substantial. We thought about ordering dessert, but just didn't want more takoyaki (though the Almond Joy takoyaki sounds like it might require a second visit). Due to the inexpensive nature of the meal and the proximity of Whole Foods, our dinner ended up being bolstered by a few things off the delicious Whole Foods salad bar as well as a couple of their terrific desserts (WF vegan peanut butter fudge is SO GOOD).

Overall I think we were both glad we checked it out. It was certainly different, and because we had nothing to compare it with, we were satisfied. I also would like to try out the Japanese Beef Curry Burrito, and because Maru is right around the corner from my lab, I might have to take a lunchtime excursion in the near future!


Maru Global
10th St between Spruce and Locust
Posted by Julianne at 4:18 PM