This past week was quite exciting as it marked the delivery of our first box of CSA veggies. We signed up for the CSA several months ago (we blogged about it here, so have been somewhat anxiously awaiting the start of the "season." Lancaster Farm Fresh Coop has been great about sending us updates about the progress of the farms and even including pictures of adorable baby lettuces that would eventually be ours!

Our pickup location is conveniently less than two blocks away at Metropolitan Bakery, a really great bakery that we frequent far too.. infrequently (it's kind of pricey and we don't buy that many baked goods on a regular basis). I suppose I was a bit too anxious about my first veggie box, as I went to the bakery prior to heading to work (around 8 AM). Unfortunately, the CSA director had not given us explicit directions on what time we could pick up our shares, and only told us that Metro opened at 7:30AM-- I assumed they would be there right at opening! Not the case... thankfully one of the employees was extremely nice and apologetic and took my name and number to let me know when they did arrive. Whew! I just wanted my vegetables! However, Metro is open until 7 PM giving me plenty of time to pick it up after work. 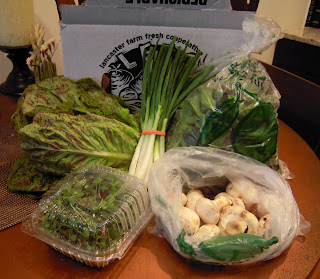 Now, on to the goods! In our first box we received:
1 bag of mushrooms (of the white button variety- a bit of a surprise as we were told we would get radishes, not mushrooms?)
1 bunch of scallions
1 head of romaine (flashy troutsback- more on this later)
1 bag baby lettuce mix (1 lb)
1 package mixed microgreens

All of these goods are certified organic and come from a variety of farms in the area. Upon signing up for the CSA, we knew the weekly load would be seasonal- and that the early boxes would be quite light and mostly spring lettuces. We also had a good idea of what we were getting (they send a list two days prior to pickup), so we were already making plans for what to do with them. And, I suppose this won't come as much of a surprise- we settled on a salad. In order to maximize the use of the vegetables in a single meal, and provide some protein and carbs, I purchased four additional items (is this going to be money saving? I'm not sure...). A loaf of wheaty sourdough bread (from Metro), some soft herb-y goat cheese, 10 ounces of sirloin steak, and a lemon equals dinner.

I chose to use the romaine as a base for the salad- it appeared to be needing consumption first. One downside to organic vegetables is that they really can't sit for long. The romaine looked very strange to me when I first saw it- the leaves were speckled with a dark red color, almost making it look like it was going bad! However, I quickly Googled "flashy troutsback" and was relieved to see that my lettuce was perfectly fine. It's so much more interesting than normal romaine, with the red color almost bleeding into the green as you chop it up. I tossed the greens, along with diced scallions, with a very light dressing I made with the juice from the lemon, a finely chopped clove of garlic, and about 1 tablespoon of good olive oil. Very simple, very refreshing. 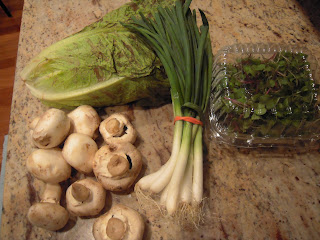 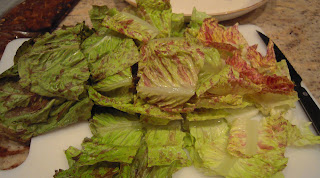 I marinated the beef in a mix of olive oil, balsamic vinegar, and garlic for a few hours before throwing it onto the grill pan. Just a minute or two per side- it was a fairly thin piece of meat and I wanted it to remain about medium-rare. I simultaneously was sauteing the mushrooms (sliced) in a bit of butter. Cut some bread, smear it with the goat cheese, slice the meat.. the meal came together in less than 15 minutes. I piled the mushrooms and sliced meat onto the lettuce and sprinkled the microgreens on top of all of it. 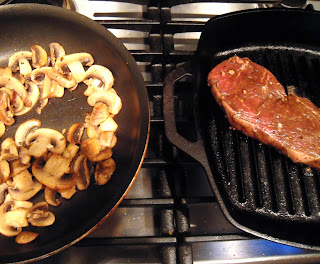 The salad made a fantastic meal. The vegetables were all extremely fresh (especially the romaine!), which I suppose they should be since they were grown locally. The sauteed mushrooms and the steak made it hearty enough for a big meal. The microgreens, while small, actually contributed quite a bit- they provided a different texture and a very peppery flavor to each bite. And of course, the benefit of picking our share up at Metro is that we have no excuse not to pick up a loaf of bread. It was definitely a great addition- I'm looking forward to trying each of the many varieties of bread offered there throughout the next several months. 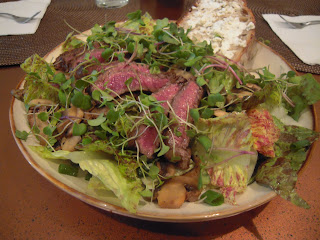 While this meal used up the majority of the box, we still had some scallions, some microgreens, and the bag of baby lettuces. We have since made a ridiculous amount of salads (for lunches and dinners) with the baby lettuce and still have half a bag to go. Never underestimate a pound of lettuce. Our veggies won't last us until the next box arrives, but they made a great addition to our week's eats, and I had a fun time coming up with a meal to incorporate most of them. I'm already anticipating the arrival of our next share, and am excited that I get to do this for the next 27 weeks!
Posted by Julianne at 8:32 PM