This past week was a bit on the stressful side as both A & I had our preliminary/comprehensive exams for our respective programs. Good news is we both passed- making us official PhD candidates! Although we do have some bigger dining-based celebration plans for some point in the future, we really just wanted a low-key dinner at the end of the week. Very recently opened on Penn's campus, City Tap House has been getting a decent amount of press. Located in the Radian complex near 40th and Walnut, the restaurant takes up a large amount of indoor and outdoor space on the second level. Although it is managed by the same group that runs Public House and Field House (two very bar-type environments that aren't known for their food), someone got smart and hired head chef Al Paris who seems to have a decent amount of credentials (we're almost unsure of what he is doing at a place like this...). A had actually stopped by City Tap House about a week and a half ago as part of her boyfriend's graduation festivities, and deemed it blog-worthy. Good location and a not-too-fancy environment sealed the deal.

I was immediately impressed with the space, and I think it is the strong point for this restaurant. A huge indoor area, very tall ceilings, lots of woodwork, yet well lit and open to an enormous outdoor patio complete with a grassy lawn area- all on the second floor overlooking Walnut Street and the residential area of Penn's campus. Though A had made reservations, the hostess seemed a little on the frazzled side and we still had to wait a few minutes, which seemed the norm for groups without reservations as well. 7 PM on a Friday and lots of empty space- it's good to know that, at least at this point, there's not much of a wait- unlike the next door Bobby's Burger Palace which still has a long-ish line. We were seated near the open kitchen, with a good view of the entire place, as well as some overheard banter between a few of the chefs.

The menu is relatively standard: apps, salads, pizzas, sandwiches, main course meals, as well as a "Daily Supper" special Monday through Saturday. The price points seemed a little off, with appetizers, meal-sized salads and sandwich/fry combinations all hitting the same price range. As A had already checked out the food selection, she knew that the plates seemed a little uninspired and not worth the extra $$s. Additionally, we saw some of the pizzas coming out of the kitchen, and although these are cooked in a traditional brick oven, they really looked unappetizing. The crust was extremely thin, dry, and cracker-like with a measly amount of toppings- not our kind of pizza.

With all of these factors in mind, we opted for the cheese plate as our appetizer ($12). We like cheese, and this is a good way for chefs to show a little creativity. Additionally, A's previous visit gave her the opportunity to eat something extremely memorable- a goat cheese "crouton" that is typically served on the beet salad. She really wanted to eat this again me to try this, so we asked our quirky but hard-working waiter if we could add a crouton to the cheese plate. I'm not gonna lie- it was the highlight of the plate. Served on a thick wooden block, the cheese plate comes with three cheeses- Cabrales (a Spanish blue), Gruyere (a sweet mild and firm cheese from Switzerland), and Morbier (a semi-soft French cheese with a distinct black layer of tasteless ash- thanks Wikipedia). While all of these cheeses were good in their own right, the super creamy ball of goat cheese encased in a thin layer of crispy-fried Panko definitely won the blue ribbon. In fact, Al Paris stopped by our table and personally asked us how we liked it. He ended up going off about the woman who made this particular cheese- something about her carrying it in a sack on her back around California when he used to work in Napa Valley. He seems a little kooky, but it gave the dining experience a special element. The cheese plate also came with some raisin-y bread, a few pieces of pear and grapes, a couple spicy walnuts, and a meager dab of quince paste. Good accompaniments for the cheese, but the chefs didn't seem to try to pair them specifically. The quince was delicious- extremely sweet with a thick texture that was easy to smear on a blob of cheese. I just wish there had been more! A little more creativity with this would have been nice, but the cheese selection (plus our own addition) was solid. Even better, they didn't even charge us extra for the crouton! 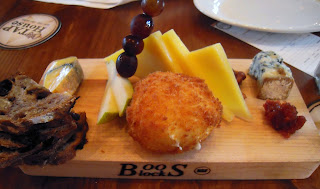 For our main dishes, we opted to order a sandwich and a salad and split them. A had already had the beet salad, and the only other one that really stood out to us was the Organic Pulled Chicken ($10). The serving sizes for the salads are enormous- definitely worth their price. This particular salad started with a huge heap of spring greens, with pulled roasted chicken around the edges, toasted pecans, thick bits of crispy pancetta, generous chunks of blue cheese, golden raisins, and finely chopped green apple, all covered with a "lemon-thyme" vinaigrette. We thought the conglomeration of ingredients made for a tasty and fresh salad, and we're always looking for salad-making inspiration. The pancetta was an upgrade on bits of bacon, and along with the blue cheese, gave a salty aspect that was perfectly complemented by the sweet and sour apple and the smoky chicken. A said it reminded her of Thanksgiving- the pulled chicken was a little reminiscent of turkey leftovers. I wasn't a huge fan of the dressing- it mostly gave the salad an oily coating without much of a flavor punch, but the salad ingredients didn't really need much. A touch more vinegar would have evened everything out. 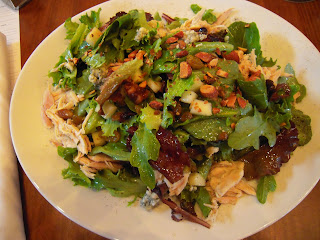 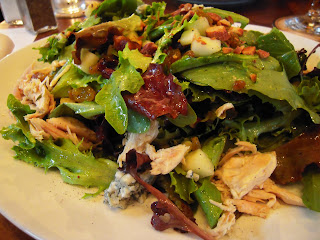 On the "Craftwich" portion of the menu, the Red Brisket Reuben ($9) also stood out. It was served open faced on a thin-sliced yet dense piece of New York-style rye bread, and came with a really-more-meat-than-necessary sized pile of brisket. Covered in a gooey layer of melted Gruyere, and with a side of unmemorable fries, I was definitely glad we were splitting this dish. The brisket was so-so, though with Percy Street BBQ and Famous 4th Street Deli on our brisket taste-o-meter, it had a lot to live up to. We both agreed that it was plenty savory for the sandwich. The thick cut of the meat made for good sized chunks in every bite. The meat was also mixed with some pickled red cabbage and came with a side of Russian dressing, giving it a very deli-style twist which we very much enjoyed. Another hearty entree- we didn't come close to finishing it. 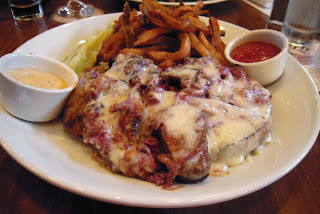 We were planning on walking home and didn't want to lug food babies with us, so we passed on dessert. I did see a nice bread-pudding type dish come out of the kitchen, which might be worth saving room for on a future visit (A says the donuts and chocolate cake are also good). Although we didn't venture into the real "meal" section of the menu, we definitely made good choices in terms of getting a good taste of the kitchen for a very good price. If you live on/near campus, we would definitely recommend checking the place out- the environment makes it a great spot for a leisurely weekend lunch or a get-together for a larger group of friends- definitely want to enjoy a summer evening out on that patio!