I know we are constantly raving about the huge number of great restaurants in Philly, but it's something that we are still amazed at after six years here! The variety of good places to eat are scattered across the city- from Northern Liberties to West Philly, and living in the middle of it all allows most of these places to be very accessible. However, it has also prevented us from taking advantage of some of the restaurants that are just under our noses, right around Rittenhouse Square. For example, J has never been to Barclay Prime- which we could probably throw a stone at (not that we would!). Another nearby restaurant that she has never visited is Twenty Manning, literally less than two blocks from our place. A slight confession: the only reason I've been to both of these restaurants is for "special occasions" with the boyfriend! My walk to and from school has me passing Twenty Manning twice a day, and I often admired its sophistication as I walked by. On my visit with the bf, we had a decent meal- the food had a heavy Asian influence, and we enjoyed dishes such as potstickers and green curry, in a dimly lit, "romantic" atmosphere. It was good, but not particularly noteworthy (when reminding him of our visit, he had a hard time remembering it.. not a good sign), particularly considering the prices. When J considered a meal there, I gently dissuaded her.

A month or so ago, the restaurant closed for remodeling, and piqued my curiosity- what would they change? Would it make me want a return visit? There was a bit of a buzz on Philly food blogs, speculating about the changes. The restaurant has been in existence for quite some time, and was definitely being outshone by many other places popping up all over town. While it still had a steady clientele as far as I could see, it wasn't what I considered a dining destination. Major props to the owner, Audrey Claire Taichman (yes, she also owns Audrey Claire) for deciding to change this. This decision was apparently based on her desire to make Twenty Manning more of a neighborhood joint, with classic foods and lower prices. J and I liked the sounds of this- an affordable, "new" restaurant just steps from our house, with a chef and an owner who both have a reputation for good food. Slowly the restaurant morphed into a bright, shiny new American-style "grill"-- complete with an interior and exterior color change and the addition of the word to its name. Now known as Twenty Manning Grill (or TMG!!), the paper in the windows finally came down and they opened for business once again.

J and I really wanted a look at the menu before we hit it up, but the restaurant seemed to be somewhat secretive about it. It wasn't published on any food blogs that we read, nor was it posted to the TMG website or in the window of the restaurant. While walking home one day, I almost stepped on a copy lying on the ground, and took about 10 seconds to pick it up and scan it (quite conspicuously). It gave me a general feel for prices (reasonable), and combined with my glances at plates of sidewalk diners' food, I deemed it worth a visit.

We arrived for our reservation about ten minutes early, and the hostess was fine with seating us right away. The sidewalk dining seemed very popular, with less diners inside. The restaurant has huge window which open out onto the street, giving indoor seating an outdoor feel as well. It's a small-ish place, but they fit a LOT of tables in. If you go, prepare to listen to the entire conversation of your neighbors. It's still a bit dark however, even with the open windows and white paint (more reflective than the former black). Our waiter was fantastic, very cheery and quick to go along with our random jokes, as well as efficient and attentive.

He started us off with a small bread "bag"- literally a tiny paper bag with two small rolls. I swear he called them "salted rye" but upon consumption, J refused to believe the "salt" existed. They were definitely rye bread, but with only a slight rye flavor, very dense and chewy with good crust. Good bread is much appreciated, and TMG did not disappoint. Accompanying the bread was a pat of butter with a few rosemary leaves scattered on top, along with two tiny glass bowls, one with two grape tomatoes and one with coarse grain salt. The additions to our "freebies" were small but delicious- rolling the tomatoes in the salt offered a great first bite of the meal. Random? Totally. Delicious? Definitely. I suppose we may be easy to please. I also wanted to take the paper bag and the little glass bowls home. Unfortunately, this did not happen. 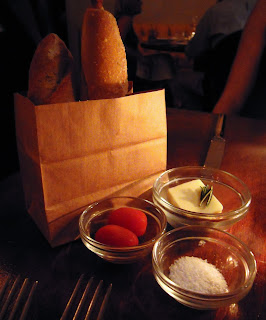 While the restaurants new logo proclaims the offering of "Fish, Fowl, Beef, (and) Pork", we somehow managed to stick to only one of these categories- the seafood. We started with the Crab Cakes ($9.50). (Note: I usually have an online menu to remind me about prices and dishes, but I'm having to go solely based on memory here. Hopefully I'm still accurate!) Two small cakes were topped with a creamy tartar sauce, and served with an apple slaw. Perfect to split between the two of us, the cakes were filled with crab and very little filler, and the sauce provided a good tangy flavor. The apple slaw was "eh"- matchstick sized slices of green apple paired with similar slivers of yellow bell pepper were tossed in a very light, almost imperceptible dressing. I think the idea was great- keeping the dish as light as possible, but the flavors were so hard to grasp with such a thin cut of the salad components. 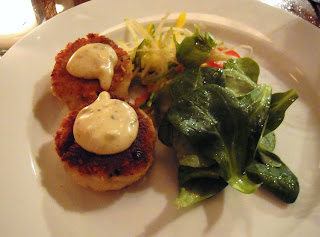 As a main dish, J ordered the Tuna Burger ($13). They also have a beef burger, turkey burger, and veggie burger, all of which are very affordable and come with a huge pile of fries. J substituted the wedge fries for the normal shoestring- for an additional $1 surcharge. We prefer thick steak-style fries to thin, crispy fries, and when we saw the wedge potatoes as a side option, were quick to make the substitution. The tuna burger had an interesting composition- cooked to order (as rare as possible), and then given a rough chop and tossed with a mayonnaise based dressing before being encompassed by a round, airy bun. This made it easier to eat (taking a bite off of a big slab of tuna could be awkward), and also provided for a more interesting texture. The tuna was delicious- however, the fresh fish flavor was somewhat muffled by the bun, which was a little on the dry side. J solved this problem by eating the sandwich open-faced. However, when she was snapping pictures of the sandwich, she got two snide comments from TMG employees. One server walked by and said "Are you going to put those pictures on Facebook?" Um, no. That would be stupid. Since the lighting wasn't great, and more than one shot was necessary, it allowed time for a bus-girl to notice the picture-taking, stop, and annoyingly hover while making confused/shocked faces. "WHAT is she taking a picture of?" she practically shouted. I could only explain that we write a food blog. She seemed satisfied with the answer, but left us feeling quite exposed and awkward. We have NEVER had comments from waitstaff about our picture-taking at any of the other restaurants we've blogged about. So thank you, TMG, for being the first. However, the delightfulness of our meals kept us chugging along happily. The fries that we substituted as a side were really good, soft and warm with only a slight crisp shell. A huge pool of ketchup was certainly utilized. 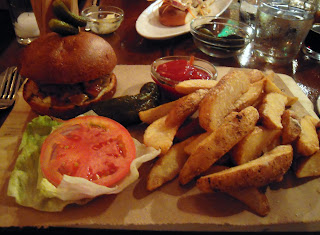 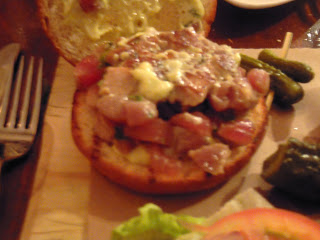 Note: I know this is fuzzy- the rude comments stressed me out- but an inside view is necessary.

Along with their normal menu offerings, TMG has a daily special. i took advantage of the Friday special- the Lobster Roll. I have had only a few run-ins with lobster in my life (sadly), but have always enjoyed it immensely. The daily special ($19) was well worth the slightly higher price. Large chunks of lobster were coated in a light mayonnaise dressing, and tossed with slivers of crunchy veggies- carrots and the like. Together, this was arrayed on top of an extremely soft long roll. At first I thought it looked like a soft pretzel, but it was definitely bread. It was really the perfect way to transport the lobster into my mouth, this time without overwhelming the seafood flavor at all (perhaps because it was already open-faced?) The roll was served with a pickle, which if I had known, I wouldn't have ordered another on the side. Yes, TMG has "A Good Pickle" as a side option ($0.50!). These pickles were super soft and reminded us of Jewish delis. Our waiter insisted that they should be called "A Great Pickle" but we think we'll stick with "good." We appreciated the subtle humor though. 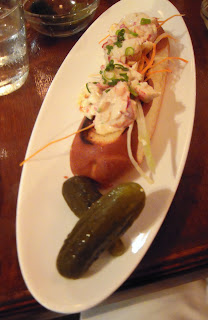 The dessert options looked fantastic, but we were a bit too full to partake. Not only do they offer a "Half-Baked Tollhouse Cookie" (Um, hello! We practically grew up on homemade chocolate chip cookies using the Tollhouse recipe, plus we enjoy our baked goods undercooked so.. this sounds like our personal heaven), but they also offer pints of homemade ice cream, complete with "two plastic spoons and Rittenhouse Square." Again, what a cute idea, and actual personality shining through right on the menu. At the end of the meal, we automatically and unanimously decided we MUST come back. I think it would be a super fun date spot (albeit a bit less romantic than Twenty Manning pre-makeover), and there are so many menu items I'd still like to try (including those desserts!) Thanks to the proprietors for choosing to create an affordable neighborhood spot that we will likely add as a regular choice to our restaurant rotation.
Posted by Julianne at 4:06 PM