I have very distinct memories of visiting New York City when A & I were much younger- driving through the tunnel under the Hudson, staring out at the city from the top of the World Trade Center, and eating ridiculously huge sandwiches and half sour pickles at a typical NYC-style deli. We've tried the Philly version- Famous 4th Street Deli, which satisfied our stomachs with a lengthy menu of traditional dishes. However, we've been intrigued by the "new school" approach that Delicatessen offers. 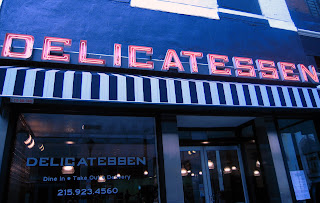 The interior is decorated in an eclectic flashy/art deco/50's diner type of theme. In the early afternoon on a Saturday, most of the diners were stopping in from a nearby conference. We were able to snag a cozy corner four-top with a fun alligator skin surface. The waiters wear cute shirts with slogans like "Koogle" (in Google font, obviously). Our waitress seemed slightly awkward- possibly new, as she had to defer to the manager for most of our questions, but overall the service was adequate. As soon as we ordered, we were rewarded with a bowl of crunchy bagel chips and a mild, herby cream cheese spread to munch on while we waited. 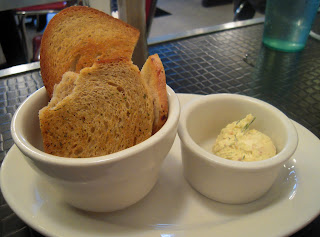 A asked if I wanted to split "Bubby's Kitchen Sink Pho" ($7), and I was more than happy to oblige her. A wide but shallow dish served up what looks like your pretty standard matzoh ball soup- a clear but fragrant, flavorful broth; chopped carrots and celery with a hint of a bite to them; big chunks of white meat chicken, and three huge matzoh balls- slightly eggy, delicious balls of bread that soaked up lots of flavor from the broth. The pho aspects came in the form of extremely thin noodles (rice? egg? not sure...) which we preferred tremendously over standard thick and slimy egg noodles. A few slivers of pastrami added an extra dimension of smoky beefiness. 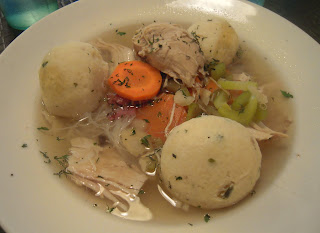 Unfortunately, we weren't able to really enjoy the soup as much as we may have liked, because no sooner than we spooned off a bite of matzoh ball, our main dishes were served. The table was on the small side, and the dishes are generously sized (read: bigger than my head), so we had to do some careful maneuvering and ended up spooning broth over our plates (spill much?). Oh well. My main plate was the Jubano ($12 + $1 for a bagel substitution). Cuban sandwich Jewish deli style? Yes please. This sandwich didn't disappoint- the perfect amount of corned beef and turkey was smeared with spicy brown mustard and topped by thin slices of half sours and a creamy, melty piece of white American cheese. I opted for a poppy bagel over the advertised long roll, but the online menu says it is served on challah, which would have been terrific as well. A perfect side salad with mixed greens, olives, and veggies rounded out the plate. 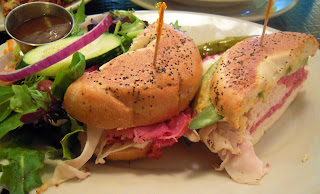 A went with another item on the "New School" portion of the menu- the Oye Ve(Y)eeee Haaaaa ($13 and no I didn't make up the name). A seedless rye bread sandwiched pastrami soaked in barbeque sauce along with a super crunchy slaw made with russian dressing- some sort of Jewish down-home reuben combination. Whatever it was, it was terrific. The peppery pastrami flavors came through the super wet sauce, making for some serious lip-smacking. Fortunately, the portions here are JUST the right size to finish without feeling an imminent food coma- a good thing since it's hard to stop eating. A chose the latkes as her "side kick", served with a chunky, spicy apple sauce. The texture was good- on the dry side and super crispy, but the flavor was a little bland, becoming completely lost if you're dipping in the sauce. 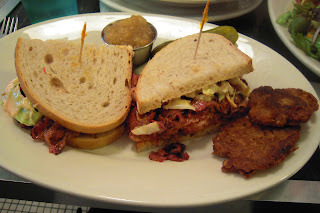 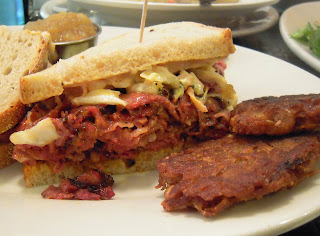 Our parents chose more traditional dishes- the pastrami sandwich and the tuna salad, and they seemed quite content with their choices. Personally, I would definitely suggest going for the more modern side of the menu- fun and unique while still maintaining a few old-school touches.

Somehow we still had room for dessert, but in the spirit of Fasnacht, we had to venture over to Brauhaus Schmitz to pick up some freshly fried donuts. Ridiculously doughy, sugar-coated baby parallelograms of deliciousness- why can't every day be Fasnacht?? 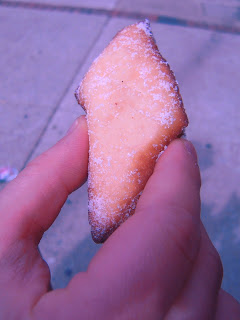 Some window shopping and strolling around the city helped digest the somewhat excessive meal, but it was entirely worth it. Though Famous 4th Street's cookies might give them a slight advantage, the overall approach and mission of Delicatessen was much appreciated and enjoyed. We'll be back!

Delicatessen
703 Chestnut Street
Posted by A and J at 8:43 PM