We're lucky (really!) to have parents who- while they live quite far away- like to visit Philadelphia as much as possible. Here for an extended weekend on their annual Easter pilgrimage to the Northeast, we made a single request of them: join us on the west side of the Schuylkill for lunch during our workday. They tend to stick to Center City, so I was almost surprised when they agreed. I wanted to pick a spot in University City to minimize their long walk, and was trying to think of something good, inexpensive, and quick. Thankfully, the newest spot on Walnut Street, Sweetgreen, fit all the requirements. Located adjacent to Bobby's Burger Palace and Chipotle, it's also a little haven of health.

Arriving late in the lunch rush, the line was fairly lengthy. Thankfully, salads don't take all that long to make, and the line moved fairly quickly. The seating is a little tight (I assume they expect most of their customers to order and leave) but I was able to snag an open table while we waited. The line snakes between a long, narrow communal table and the large menu on the wall, giving you a chance to decide basically from the moment you step in. 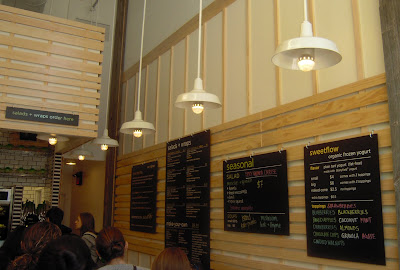 The menu won't give you a lot of trouble- very simple, with just a handful of creative salad options (all of which can alternatively be stuffed into a wrap), or you can go the design-your-own route. There are two order stations, one for the salads and wraps, and one for the sweet side of Sweetgreen- tart frozen yogurt. Very handy, if you're just craving dessert. Behind the counter, racks of salad greens are either intimidating or inspiring- I haven't decided. 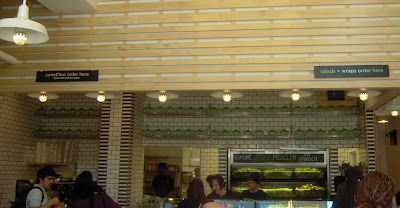 All four of us went with salads (surprise), which are served in huge wooden bowls (you can also purchase a reusable salad container for $5, which gives you $0.50 off on all future purchases). The sheer amount of greens you get almost makes the steep price worth it right off the bat. J chose the "Curry Gold" ($8.25), a mix of baby spinach, roasted chicken, cucumbers, beets, dried cranberries and toasted almonds, all mixed with a fat-free curry pineapple yogurt dressing. The combination of ingredients was much appreciated- the salad creators definitely know what's up- but she had some qualms about both the chicken and the dressing. For a restaurant focused on vegetables, they might want to consider limiting it to just that, as their chicken is cooked and shredded into tiny "woodchips," dry and tasteless. The dressing, which sounds fantastic in theory, was plain, and the lack of fat both added to this problem and hindered the overall satisfaction level. We would order this combination again-- just as a "do it yourself" version without chicken and with a different dressing. 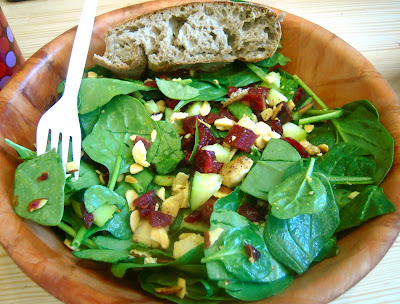 When you order, each salad is custom made, and certain options are provided along the way- one of which is the amount of dressing you'd like. Instead of simply soaking each bowl in a gallon of liquid, you can specify light, medium, or heavy applications. Each salad also comes with the option of bread (included in the price), which I would never pass up. A dense slice of wheaty, chewy goodness comes without butter or oil- just bread, exactly the way we like it. It also adds a few bites of carbs, and broke up any chance of leafy green monotony.

I went with the "Chic P" salad (pronounced "sheek p" apparently, and on the cheaper side at $8), since it somewhat resembled the object of my salad obsession: the Greek salad. A mix of baby spinach and mesclun greens is topped with a generous number of baked falafel balls, chickpeas, cucumbers, red peppers, and pita chips, and then tossed with a lemon-tahini dressing. One of the vegan options on the menu, this creation was both filling and delicious. The falafel weren't your average fried ball of ground beans, but instead fluffy spheres of whole chickpeas, flour, and chopped veggies. The pita chips gave a lovely fried crunch to every bite, while the dressing (medium application!) kept everything nice and moist. A winner in my book, I'll probably try to recreate this in the near future (or just head back to order it again). 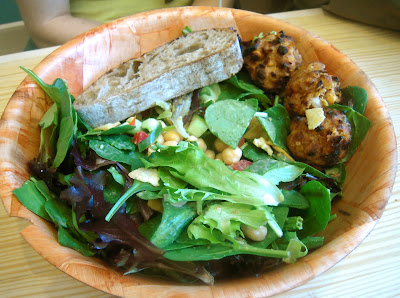 Another notable feature of Sweetgreen is their focus on sustainability. A lot of their produce is locally sourced, with the provider farms and their locations prominently displayed near the menus. They also use biodegradable cutlery, cups, and bowls (if you're taking it to go), and offer all-natural carbonated beverages instead of the usual Coke/Pepsi deal. While these issues aren't of utmost importance to us, it makes me slightly more willing to pay a few extra bucks for my giant bowl of greens, and is nice to see in a "fast food chain."

Before we left, I pretty much forced J to buy us a cup of the frozen yogurt to split-- I mean, for blog purposes, obviously. I'm not a huge fan of the tart yogurt offered at other locations around the city, but this really hit the spot. Made with Stonyfield plain, nonfat yogurt, the smooth, frozen concoction is slightly sweetened and comes with your choice of three toppings. Since a small rings in at $4, those toppings are much appreciated. J chose for us all, and came back with a largish cup topped with coconut, blueberries, and toasted almonds. It's a fairly generous serving, and I don't think any of us could have asked for a better ending to our lunch- nothing heavy, just fresh, good food. 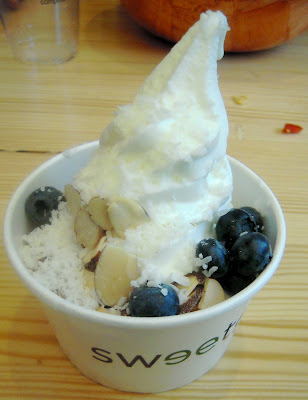 Once again, I find myself jealous of current Penn undergrads- the number of new eating establishments that have arrived in the past 3 years is rather astonishing. However, I may stop complaining and venture across campus more frequently now, especially when I have a hankering for a healthy pick-me-up.