Even though we've ventured in a few times for dim sum (always with knowledgeable friends), the area of Philly's Chinatown is essentially uncharted territory for us.  We were recently looking for fun free weekend activities in the city and stumbled upon a walking tour company, Free Tours by Foot.  Among others, they offer a 2.5 hour food-focused tour of Chinatown on Saturday afternoons.  Completely free, you pay for whatever food you want to try and then tip the tour guide at the end (or not, I guess, if you hated it...).  We figured this would be a great opportunity to explore the area with some guidance.

We met our tour group (about 12 people) and our super sweet guide, Jenn, near Independence Visitor Center- a few blocks from Chinatown but a better place for gathering a group together.  As we walked toward the real starting point of the tour, Jenn explained that she would incorporate a discussion of the history and culture in between the six food stops that spanned the entire Chinatown area (bordered by Vine and Race to the north and south and 8th and 11th on the east and west). 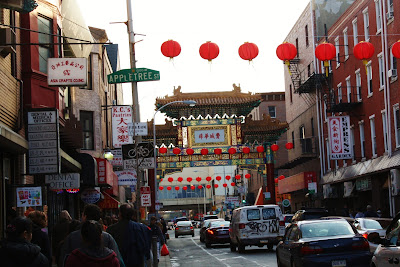 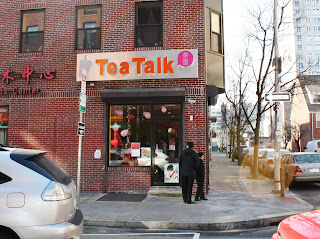 Our first stop was supposed to be the Lucky Chinese Cookie Factory to see the process of fortune cookie making, but apparently some part of the equipment was not working.  However, we were able to start out with a beverage at Tea Talk, right around the corner. Our approach to the tour was to share with our smaller group of four, so I made the executive decision to order a Thai iced bubble tea ($2).  A combination of strong black tea, sugar, and condensed milk, it's a sweet, frothy concoction.  The tapioca bubbles were a little more dense than others I've tried, but the irony of chewing a drink never fails to amuse me. 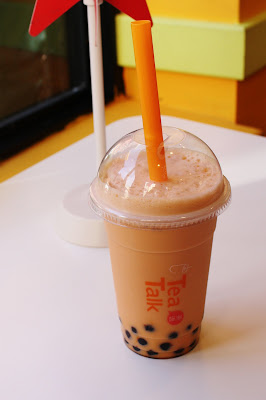 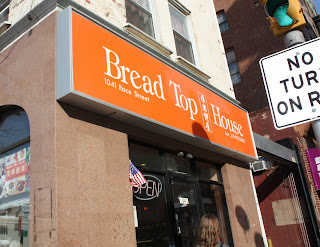 At this point, we were ready to get down to the eating, so we were excited about the second stop- Bread Top House.  The specialty of the "House" are the moon cakes- a thick bean or fruit paste encased in a thin layer of pastry ($1 each).  We tried both the traditional red bean paste as well as a pineapple flavored cake. The red bean had a unique flavor that reminded us of chocolate and peanut butter, so it was almost like eating a big piece of fudge.  Unfortunately, the pineapple wasn't as big of a hit- overpoweringly sweet.

I also snagged a pineapple bun ($0.70) - named after the shape and design on the top surface.  I was introduced to this huge, sweet, airy pastry with a sugar crusted top a few years ago by a lab member, and I've been hooked ever since.  A little like a sugar cookie fused with a Hawaiian roll- what's not to like? 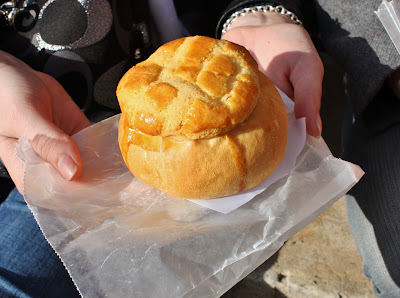 We took a detour through an underground market (must go back to explore all of the interesting candies, teas, and spices they sell!) to our third stop. 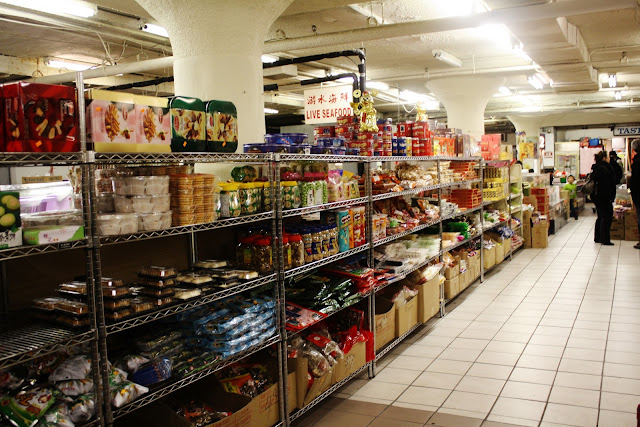 Cube Cafe has a wide selection of breakfast and lunch items, as well as a list of snacks that were completely foreign to us.  Trying new things is the fun part of such a exploration, so we placed an order for curry fish balls ($1.50) and a sesame Hong Kong-style waffle ($2).

The fish balls were on the weird side.  Served four to a skewer, the consistency is incredibly dense- almost rubbery- and definitely fishy.  A light coating of a sweet curry sauce gives it a bit of flavor, but even that had a weird chemical aftertaste.  Not our favorite, but we're glad to have tried them!

The waffle was a much bigger hit- a web of crispy, slightly sweet waffle balls (apparently balls were the theme here...) with a subtle nuttiness.  Definitely a fun little snack to share- some flavors even have fillings (chocolate sounds great!).  A compared the flavor to a sesame bagel, but it had all the textural aspects of a waffle. 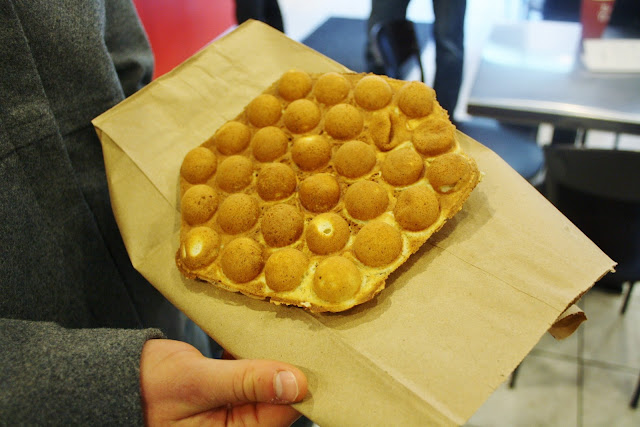 My cousin and her boyfriend had a hankering for some "real" food, so they both ordered ham and egg noodle bowls ($1.50).  Simple ramen noodles sauteed in a light soy-based sauce were mixed with strips of salty ham and topped with a fried egg.  Super cheap and a winning combination of ingredients. 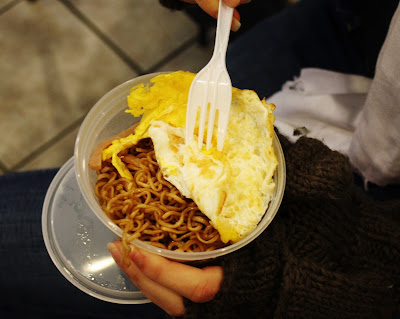 I'm glad I kept it light because the next few stops filled me up.  At K.C.'s Pastries, we shared a piping hot pork bun ($1.50)- a large, flat, shiny roll filled with a sweet and spicy pork concoction.  The bun itself was buttery and airy, but the sweetness of the pork was a little off-putting.  We were in the mood for something a little more savory at this point.  Apparently K.C.'s is well known for their egg custard tarts, so we'll have to try that next time!

We took a short trip across the street to Q.T. Vietnamese Sandwich.  The shop specializes in different versions of the traditional bahn mi sandwich- meat, mayo, pickled veggies, and a little cilantro on a crusty French baguette.  We ordered the #1 "house special", a traditional mix of pork and ham ($4.50). The sandwich is huge- even between the four of us, we had a hard time finishing it.  The bread was my favorite part- a flaky, crispy crust and soft interior.  A little too much mayo for my taste (but any mayo is too much mayo, really) but along with the pickled veggies, it kept the sandwich from being too dry.  The pork is cut from a log of compressed meat, so that was less than ideal, but I thankfully didn't get any gristly bites.  Not my favorite sandwich, but a heck of a deal.

At this point we were nearing stomach capacity, so we thankfully only had a single last stop on the tour.  We ventured under the Reading Terminal underpass to Dim Sum Garden for some of their infamous soup dumplings (xiao long bao).  Jenn purchased two orders of the dumplings (8 to an order)- one pork and one pork and crab.  The doughy pasta dumplings are filled to the brim with a bit of meat and piping hot broth, so there is a special technique to eating them without making a mess/burning yourself.  Jenn demonstrated the technique and coached us to enjoying these little pods of soup.  These guys are addicting!  As full as we were, we each had no trouble polishing off a few of them. 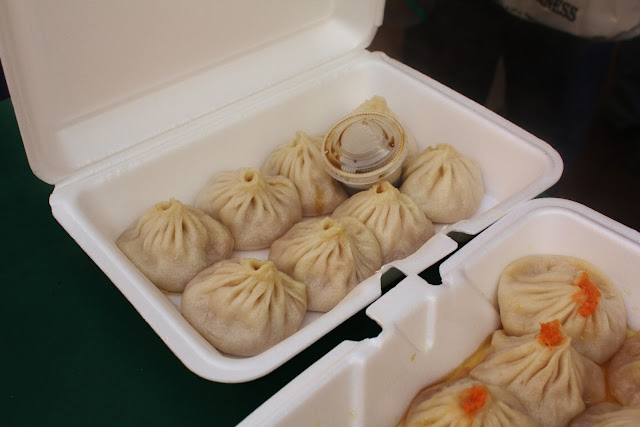 I left out the history lessons and mural viewings, but I highly recommend checking out this tour to learn a good deal about the Chinatown area and its occupants.  We tried so many different types of food and got a feel for the layout of the neighborhood. One of the best parts of Chinatown is how incredibly cheap all of the food is- snacking our way through the different stops couldn't have totaled more than $20 for the four of us. The other great part about the tour is that we definitely feel ready to venture back on our own!
Posted by A and J at 7:24 PM