After being initiated into the Burger Club last month, we were pumped for the next meeting.  The Club does a great job of keeping our excitement up, as blog posts and tweets frequently update us on upcoming events, news and even short reviews of burgers around town.  The next month's meeting place is usually announced at/around the time of the current month's meeting, so we've known for some time that we were headed for Perch Pub.  Located above the long-standing Italian-focused Varalli, we've never really considered Perch as a place to grab some eats- we're glad we've been properly introduced now!  For the meeting, the folks at Perch graciously offered all members a $5 discount on any of their burgers. 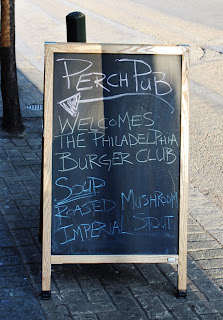 The restaurant is perfectly situated for great views of Broad Street, and is displaced a bit from the busy bar at the other end of the room, giving us plenty of breathing space. The waitress serving us was a little spacy, and while others commented on the great service they received from other servers, I thought she could have stepped it up a notch.  Too much time elapsed between drink orders/bringing drinks/taking food orders– and considering we were all there for a burger, we really didn’t need much time to ponder the menu. 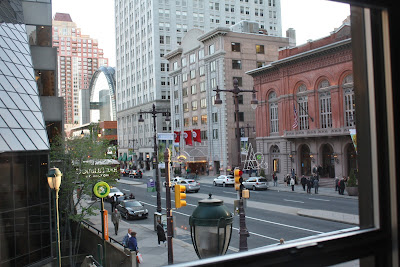 Their burger selection, in our opinion, is great– lots of interesting toppings as well as a rotating special.  Four everyday options include the French (Gruyere/onions/arugula), the Wake and Bacon (fried egg/cheddar/bacon jam), the California Cobb (avocado/blue cheese/bacon), and the Vino (pesto/onions/goat cheese, all prepared in wine).  The special of the day was topped wtih roasted red peppers and pancetta, again representing a creative mix of gourmet options.  You can also construct your own with any of the above toppings of your choice.

A LOT of members chose the Wake and Bacon ($11)- probably the most popular choice.  However, there were definitely mixed opinions on it.  It should be noted that all of their burgers are generously portioned, with 8 ounces of quality beef (apparently a LaFrieda mix?) stacked high with toppings and served on a soft, fluffy sesame-studded brioche LeBus bun- making both of the most important components just right.

Thus, the burger experience came down to the toppings.  The Wake and Bacon was a mess to eat, which was completely expected and actually kind of enjoyable.  Put a fried egg on anything and you’ve pretty much got us sold- the rich egg yolk soaked into the meat and the bun was our favorite part.  Unfortunately, the apple-smoked bacon jam, which sounds great in theory, was extremely salty and in my opinion, also too sweet, overwhelming the other flavors.  There was also a layer of wilted lettuce at the bottom of the burger, which I thought for sure was an error in the kitchen, but apparently it’s not!

Two things common to all of the burgers stood out to us– the bun and the side salad.  The bun was perfect- brioche and beef are really meant for each other.  For our second burger, the bun wasn’t quite big enough to contain all of the toppings, but many of the other burgers around us seemed better proportioned.  The salad is a nice little mix of greens, carrots, tomatoes, and onions, which acts as a light balance to the burger.  A small cup of sweet-and-sour pickle chips was also a fun addition, although the bread-and-butter variety is personally my least favorite.

And, our second burger choice was... the California Cobb ($12)!  My first ever burger ordered rare (eek!) came out perfectly cooked– plenty of pink (the waitress also stopped by to ensure each of our burgers was cooked to our preference-- I think she was concerned about my love for raw beef).  The meat is well-packed and obviously of good quality, but was a bit underseasoned.  The combination of flavors and textures on the Cobb were superb- a blue cheese dressing, pecan-smoked bacon (so fancy!), spicy arugula, a thick slice of fresh tomato, and the best part, huge chunks of soft avocado.  Again, put avocado on anything and I will eat it– Perch Pub certainly knows how to reel you in with all your favorite comfort foods… on a burger. 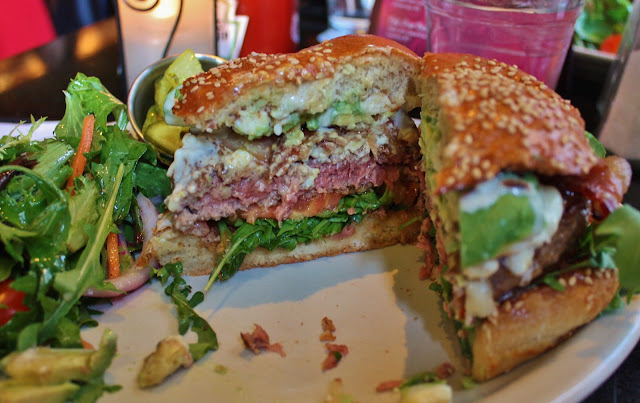 For an additional $1.50, you can add a side of fries or onion rings.  I kind of have a weird love for onion rings, but didn't sample the goods here.  Some commented that they were cut a bit thick (too much onion, not enough breading), but looked good to us! 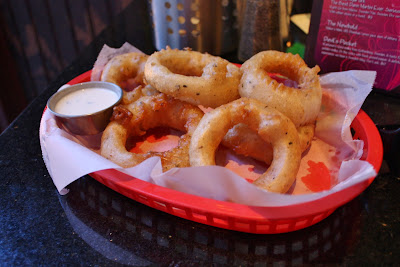 Overall, we’d return to Perch just for the burgers, let alone the nice views and prime location.  Plus, burgers only make up a small portion of their menu- they seem to have a good range of gastropub type eats.  Some commented that the prices were a little high (the special of the day topped out the burger price list at $13), but we felt the quality and quantity made the price point reasonable.  Certainly, the $5 discount didn’t hurt.  Our second Burger Club meeting definitely has us even more excited to finally be a part of such a great group!


Note: A similar post has been posted to the Burger Club blog.  Yes, we wrote it too!
Times "burger" appears in this post: 21
Posted by A and J at 8:14 AM