A & I didn't really get into the Philly food scene until the latter portion of our time as undergrads at Penn, which is unfortunate because there are so many fun restaurants in that area that are now a little too far away to walk to (our transportation mode of choice). However, my boyfriend's birthday required me to choose a dinner date location, and I knew I wanted to share a "tried and true" favorite with him that would also be a surprise. Because it was a special occasion, I figured I could splurge on bus fare for us to get to Rx, an adorable little place on 45th and Spruce.

A few blocks from Penn's campus, the neighborhood is much more quaint and quiet and seems very friendly and almost family oriented. The restaurant itself is relatively small, with a mishmosh of decorations consisting of pharmacy-related antiques and random artwork for sale. I had made reservations for later in the evening on a weeknight, but the place was almost entirely empty when we arrived, which was fine by me. Of course I want to see solid Philly restaurants doing good business, so I was also glad to see a few other couples and groups come in right after we did. Also, the relative quiet in the dining portion of the restaurant makes it very easy to hear every word that is spoken behind the thin divider that separates the kitchen area. Not a huge deal, but it sort of detracts from the atmosphere.

Rx has a great prix fixe option during the week. They're closed on Mondays, but Tuesday through Thursday you can order an appetizer, entree, and dessert for $30 (with one or two $25 & $35 options reflecting the cost of the entree). Another thing about the Rx menu is that it is seasonal- each month the menu is changed to reflect whats available. They also have information about all of their food suppliers (farms, etc) which shows the importance they place on getting ingredients from accountable sources. However, there are some things that I have seen on the menu a few times, so its not like they are totally revamping the menu every month.

I chose the calamari for my appetizer- not usually a terribly exciting dish, but Rx puts a little twist on it to make it a little more interesting. The calamari itself is lightly breaded and fried, a good mild salty flavor, a little peppery, not too chewy, not too greasy- it just seemed a lot lighter than other calamari I've had. It was a good sized portion- enough for two to share, easily. The "twist" comes in the form of an Asian influence seen in the spicy sweet dipping sauce, sort of like sweet & sour sauce, but kicked up a notch with some red pepper flakes. Additionally, the pile of spring greens that was served alongside had an extremely light, almost invisible soy-sauce-based dressing that was surprisingly flavorful. Overall, the three components meshed really well- salty, sweet, spicy... delicious. 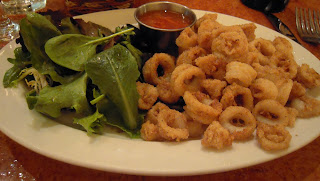 The bf ordered the beet salad (yes, beets continue to play a prominent role on this blog). This consisted of a base of thinly sliced beets of the red, yellow, and pink varieties (pink was new for me...) which held a big fluff of arugula coated with a whole-grain mustard viniagrette. Some toasted pine nuts and a few chunks of blue cheese helped to complete the picture. The salad led us into a beet-related conversation- apparently neither of our mothers like beets, which makes me wonder if its a generational thing. Maybe beets are prepared in a different way now than they were a few decades ago? And although A & I both love beets, my boyfriend is decidedly more apathetic towards them- in his words "I've never gone out of my way for a beet but then again I've never had a beet I didn't like." The salad was light and fresh, leaving him with plenty of room in his stomach for all my leftover calamari. 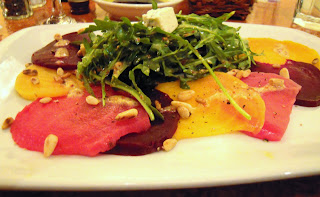 On to the entrees... I ordered the whole trout, deboned (thankfully), with a single stuffed grape leaf inside, served over a big pile of chickpeas, onions, and olives. I don't have a problem with seeing a whole fish on my plate, but there were two other fish options on the menu for those who dislike seeing the head/tail/skin. Overall, the dish was pretty good. The fish came out perfectly cooked, flaky and steaming, though as it sat on my plate for awhile, the meat seemed to get a little on the mushy side. Again a portion big enough to share, two big meaty "fillets", served with what seemed like a whole jar of olives and a whole can of chickpeas. The onion chunks were soft and sweet, but the combination of feta cheese and the olives made the salt content a bit high for my liking. I liked the idea of the stuffed grape leaves inside the fish, but thought it a little odd that it was just one, and it was just another salty contribution to the dish. 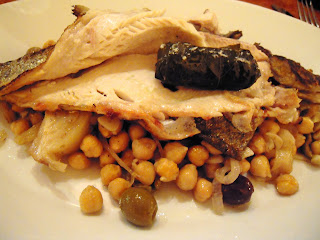 My date ordered the pork belly, which came with broccoli rabe and macaroni and cheese. I'm not a huge fan of pork belly, mostly because it just seems so fatty (and it is!) but my boyfriend enjoys a good piece of fatty meat, so he was happy. I did try a (less fatty) bite at his request, and was pleasantly surprised with the range of textures and flavors in that single bite. The top and bottom had a tougher "crust" (skin?) that seemed difficult to cut through, but tasted like syrupy-sweet crispy bacon. The inner layers were softer, salty and smoky. I liked one bite, but I personally would not have liked to eat the whole big hunk of it. However, it did seem to be a popular item on the menu as someone at each of the three tables around us also ordered the plate- yes, I am THAT nosy restaurant-goer that not only listens to your conversations but I also analyze what you ordered. I was excited to try the macaroni and cheese, which was coated in a yellow cheesy layer, but it was a little on the bland side. I'm not a mac & cheese connoisseur, so I'm not sure what it needed, but it just seemed like it was missing something. 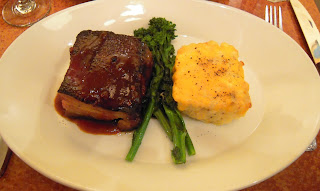 Dessert at Rx is ALWAYS a highlight (just going for dessert is a great date idea, it's worth the hike), so we excitedly perused the menu. The seasonal fruit cobbler is a personal favorite, and when informed that it was apple, I just couldn't say no. Sweet, soft, juicy chunks of apple in a thick sweet cinnamon-y sauce, covered in a buttery, crunchy, cobbler-y topping, and served with a big dollop of whipped cream and an even bigger scoop of vanilla bean-embedded ice cream... you really just can't beat that. You better believe I ate every single bite. I can never decide which component is my favorite, they just meld together in a giant conglomeration of amazing flavors and textures and temperatures. A was a little jealous of our trip to Rx and texted me a request to "open purse, insert cobbler" to bring home to her. 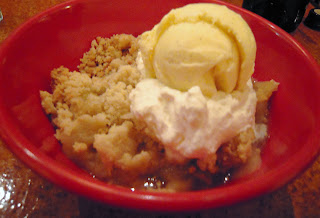 My boyfriend and I both have a big weakness for chocolate, so I was happy when he ordered the triple chocolate bread pudding so that I could sneak a bite (or two). The base was chocolate brioche from Metropolitan, which is a superb start. The bread was dense enough to encapsulate a solid chocolate flavor without being overly heavy. Chocolate chips and a rich chocolaty syrup hold the bread chunks together to make a chocolate-y explosion in your mouth. No complaints here. 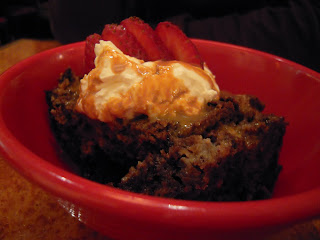 Overall, a good repeat trip to a good little neighborhood restaurant. The place is actually more famous for its weekend brunch, which I've never had the chance to participate in. My boyfriend was happy with my choice, he was definitely surprised, and we both enjoyed our meals. I will certainly continue to recommend this place, especially for anyone who lives in the University City area.
Posted by Julianne at 4:46 PM