Although we're still not totally sure how to pronounce the name of this place, we've had our eye on Matthew Levin's new creation for quite some time now. When it finally opened this week, a good friend of ours sent out a fortuitous email asking if we'd like to check it out during it's opening week. We didn't exactly need to be asked twice...

We headed down to 5th and Bainbridge to find a rather busy restaurant at 7 PM. Since they don't take reservations for parties smaller than 6, we were lucky that they squeezed an extra chair onto an open four top to fit our group. The place is adorable- falling into the self-described "neighborhood bistro" category in terms of size and atmosphere. Lots of windows- the lighting was fantastic even as the sun started to set- and a very open feel to the whole place, even if the tables were rather close together. It's decorated with books, chalkboards, test tubes, and terrariums, and with the tables coming from an old science classroom, it definitely has a 7th grade biology class feel to it... in a good way. Apparently a few of the tables even have authentic inscriptions such as "This class sucks!"

The service was a tiny bit on the slow side, but we'll let it slide as the staff is still trying to get the hang of things. Also, it seemed like Levin was personally checking the quality of each dish coming out of the kitchen. A & I had been perusing the menu ahead of time, and with a fantastic review of her first visit, our dining mate helped us make our decisions. We decided that ordering, and sharing, the majority of our dishes from the small plates category would allow us to try out a bit more of the menu.

I started with the poutine ($15). This is something I've definitely never seen on a menu in Philly. A Canadian dish (who knew Canada actually had something to offer besides maple syrup and Celine Dion)(I kid..), it typically consists of a bowl of french fries topped with a thin brown gravy and dollops of cheese curds. As this would never qualify as a $15 dish in our book, Levin also topped this decadent treat with foie gras, and lots of it. As my first taste of Adsum, I was totally blown away. The fries themselves were perfectly cooked and salted, somehow providing a delicious potato flavor while maintaining a great outer crispiness, inner softness, all at the perfect temperature for eating. The gravy was also rich but not overly so. The cheese curds gave a smooth, cool texture, though I can't put my finger on exactly what the taste was- very subtle. Definitely a delicious combination to begin with, but with the addition of melt-in-your-mouth foie gras, this dish was over the top. In order to keep it from really becoming overwhelming, we cut the foie gras up into tiny pieces to accompany a gravy soaked fry. I'm so glad I finally got to try this dish, and I'm looking forward to having "real Canadian" poutine in Toronto in October! 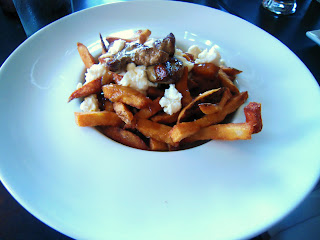 A started out with the fried oysters ($12). Fried oysters are definitely on our "obsession" list, and these hit the spot. The oysters themselves were quite large, ensconced in a thick peppery batter that was spot on. Not greasy at all, though the oysters themselves dripped a salty oystery juice upon eating. Underneath the oysters was a thin relish of mild pickles and onions in a thin juice that was easily soaked up by the batter giving another dimension of flavor. The crispy outside with the chewier oyster inside made for a little texture sandwich that was incredibly satisfying. 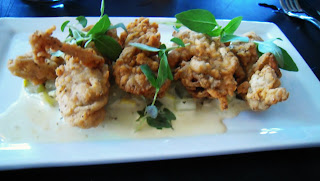 I ordered the skate ($17) as our only "main", and it sadly was the only disappointment of the meal. The skate itself was on the thin side and the texture was incredibly stringy, to the point of making it slightly difficult to cut. It was also a little bland, and there wasn't quite enough of the apricot sauce to make me happy. The apricots themselves were delicious- stewed in a white wine reduction, they were soft and sweet. However, the few pieces of fried broccoli were underwhelming and didn't really mesh well with the rest of the meal. A is more of a skate fan than I am and she seemed to enjoy it a bit more but I was definitely left wishing I had ordered something else. 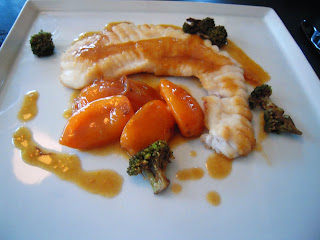 A had another "first course" for her entree- a huge Bibb lettuce salad ($10), complete with huge chunks of creamy blue cheese and thin slices of crispy pears. The dressing was heavy on the sesame oil giving it somewhat of an Asian inspired taste and, though a little on the unexpected side, somehow worked. The lettuce was definitely the star of the show- some of the freshest and most flavorful Bibb I've ever had. It certainly would make for a good starting dish, but with the extravagance of our own starting dishes, it was a good balancer. 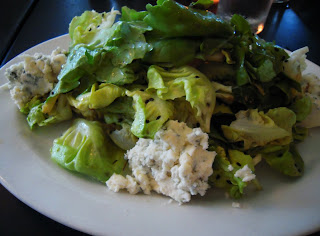 The other diners at our table enjoyed the Kool-Aid pickled watermelon (think Kool-Aid in a solid form), the Gouda cheese plate, and the Adsum burger. I think I would order this in the future because it was the best burger EVER. Not that I'm a burger connoisseur in any way, shape, or form, but this burger got our table discussing the best burger in Philly, for which this was a clear contender. The meat itself was incredibly thick, providing an amazing medium-rare temperature throughout. With the slightly sweet bun and a side of those perfectly cut fries, this is also the most economical choice on the menu, at $12. Plus, it's certainly big enough to share.

Although there were a few options on the dessert menu, we opted to save room, as we were invited to our newly married friends' place for an amazing dessert spread. As fellow bloggers (and also following the A&J initial trend) and foodies, our host and hostess baked up a totally delicious peach pie complete with lattice crust. This was served up with a homemade apricot sorbet which we will definitely be making in the future, as well as an enormous fruit salad and brownies (chocolate has to make an appearance somewhere!). Many thanks to our friends for a perfectly sweet ending to a great meal!

We came home very satisfied after some great food with great friends. Adsum is a solid restaurant and is definitely on our "we want to return!" list. We were a little disappointed to see that the menu was a condensed version of the originally posted one on Meal Ticket, but we also realize that you can't be overly ambitious, particularly in your first week of business. The concept is fabulous and we were definitely impressed, coming away with an overall very positive feeling about the food.