Every time a new restaurant opens on Penn's campus, I cry a little inside. It seems completely unfair that we couldn't have all of these culinary delights during the four years that we were stuck there. Brattiness aside, University City is really developing it's restaurant scene; one of the more recent additions is Sang Kee Noodle House. Located within the Sheraton Hotel, Sang Kee is actually one of a number of restaurants owned by the same group, including one in Chinatown and one in Wynnewood. These restaurants have been recipients of a number of awards, leaving us curious about the newest addition to the family.

The start of University City Dining Days gave us just the impetus we needed to check it out. Much like the oh-so-popular Center City Restaurant Week (which we blogged about here), participating restaurants offer three course dinners for a set price for two weeks- conveniently coinciding with the deadest days of summer. Unlike Restaurant Week, Dining Days has three price points, $15, $25, and $30 (all less than RW's $35 cost). Additionally, Restaurant Week does not include any restaurants west of the Schuylkill (they aren't considered "Center City"), so Dining Days helps make up for this fault. Basically, Dining Days >> Restaurant Week.

Sang Kee falls on the cheapest end of the spectrum, allowing us each three courses for just $15- perfect for our very rare mid-week meals out. Arriving right after work (ie quite early), we were surprised that the space was so full. However, we were seated quickly in the light, bright, open dining room. The service throughout the meal was typical of many Asian restaurants- simple and efficient without a lot of personality (really, a smile wouldn't hurt you!). The real restaurant menu is extensive, offering dozens of popular Chinese dishes, as well as big noodle bowls, soups, rice bowls, etc. The Dining Days menu was much more limited- giving us the option of four appetizers, five main dishes, and two desserts.

I started with the Peking Duck roll. Sang Kee's restaurant in Chinatown is named "Sang Kee Peking Duck House," so I assumed that these people knew what they were doing here. While it wasn't the most gourmet start to my meal, it was quite enjoyable. An Asian "pancake" (you know, that thing they serve with Moo Shu that is nothing like a pancake, and absolutely identical to a tortilla?) was expertly wrapped tightly around a filling of shredded duck and a light, tangy sauce (almost barbecue-like). The duck was both crispy and a little greasy, but it IS dark meat. The roll didn't seem to be cooked in any way, unlike an egg roll or a spring roll, and was served with a little dish of oyster sauce- not very original, but a good accompaniment. The tortilla was thick and chewy and not simply an afterthought to the duck flavor and texture. 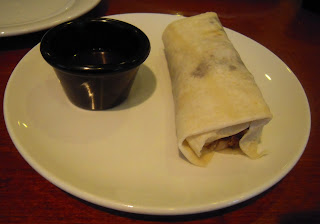 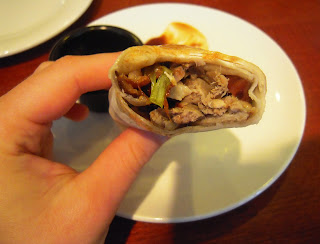 J rolled with the scallion pancake. A generous serving of multiple wedges was served with a thin, sweet sauce, completely unnecessary but a bit addicting. Scallion pancakes are essentially flour, small bits of green onion, and some sort of fat, rolled and smashed together to incorporate the scallions throughout the dough. These are then pan fried, and end up with multiple crispy pastry layers, somewhat like a puff pastry. I may or may not have exchanged several of these wedges for a single bite of my duck roll. 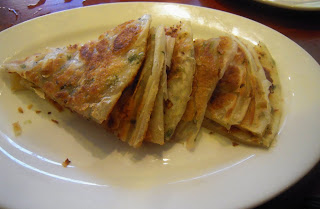 For the entree, I chose the Beef with Pineapple in Black Bean Sauce. In my days at Beijing (the original Chinese eatery on campus), I always chose a dish with rice, vegetables, and meat- no need for anything fancy. This dish seemed to be my closest option. I've never had black bean sauce, so I wasn't sure what to expect- beans to me aren't necessarily an Asian specialty. Beef bits (J compared them to cheesesteak meat) were tossed with a variety of vegetables and pineapple chunks in a dark sauce which contained a few black beans here and there. The sauce was not very flavorful- I would have preferred upping the amperage in both the garlic and heat categories. However, the beef somewhat made up for it- tender and a bit fatty, somewhat like ribeye. The mushrooms were also a hit- whole, soft, but with a little bite left. The chunks of bell pepper weren't quite as good- they were completely raw. I like vegetables, but I would rather the peppers have spent a little time in the pan. The pineapple almost seemed like the odd man out. I liked the sweet addition, and was happy to see that it wasn't canned (at least to my knowledge), but still a little strange. The side of brown rice was hardly mentionable (plus I have a really hard time with rice and chopsticks). 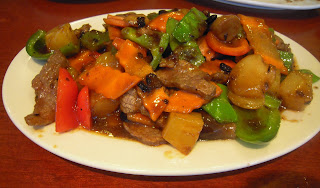 As the restaurant is called Sang Kee NOODLE HOUSE, J ordered the Shrimp Phat Thai in order to experience what this place should really be known for- the noodles. Apparently "Pad" in Chinese is "Phat"- way to totally steal the most well-known Thai dish. After one bite of these noodles though, we couldn't care less. The plate was huge- "more noodles than I eat in a year" according to J, intermixed with a few veggies, some pressed tofu and shrimp, and topped with crumbled peanuts. This appeared to be one of those dishes that you could easily grow tired of after just a few bites, but thankfully, this wasn't the case here. Both the flavor of the sauce and the texture of the noodles were more than we could have asked for- creamy, peanutty, and spicy all at once, with no sign of gumminess or dryness from the noodle base. I was glad she couldn't finish the plate and offered me the leftovers for a later lunch (I think it was almost better the next day!). 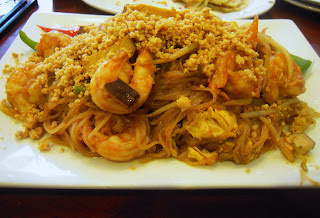 Our dessert options were a bit meager, so obviously we each chose one of the two options and (sort of) split them. The ice cream bowl contained three scoops of ice cream, each of a different flavor- coconut, green tea, and vanilla. The coconut was the stand out, as it was very rich and flavorful and contained shreds of sweetened coconut. The green tea was pretty bland- it took me a few bites to even get a hint of tea flavor, while the vanilla was just a classic. It reminded me of the sundae we shared at Doma, but a very weak version of it. 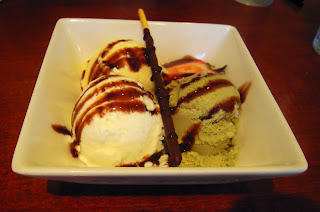 The other dessert option was the Red Bean Coconut Pudding- somewhat more "authentic." Since I have a thing for red beans, I probably enjoyed this more than the average person. The pudding was somewhere between the textures of Jello, pudding, and custard- creamy but also a bit jiggly. It didn't seem to have as much coconut flavor or texture as the coconut ice cream, but was still enjoyable as a sweet end to the meal. The red beans were gathered at the bottom of the cup, and still held a considerable bite- more so than expected. I liked the fact that you could scoop the beans away from the pudding and eat them alone, but again, I'm not sure what the average person would think. 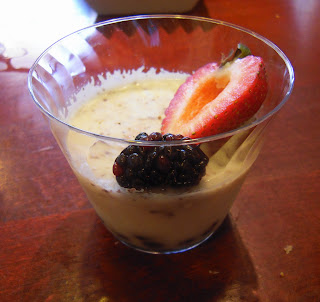 Lots of other diners around us were not sticking to the Dining Days menu, and offered me lots of reasons to come back- everything looked delicious. The portions are huge and the prices are low, something I can certainly appreciate. I'm not sure I would go running back, but I am sure that if it had been established on campus when I was an undergrad, I would have been a frequent diner. But, for $15, we definitely received our money's worth (including leftovers!). For those of you close to campus, definitely give Dining Days a shot- it runs until July 29th and offers a huge number of restaurant options.