The second half of our week-long detox was just as fun and delicious as the first half. I found that I was often a bit hungrier in the morning (pre-breakfast) but attributed that to the lack of random nighttime snacking, which I tend to do. I also felt that I started sleeping better, but can't say if it had anything to do with my eats. Enough talk, on to the food!

One of my favorite parts of the week was experimenting with different breakfast foods-- my goal was to avoid repeating the same oats-and-peanut-butter kind of meal. The rest of our week was started with these: 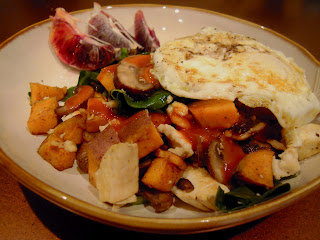 I loosely followed the linked recipe, but substituted a chopped sweet potato instead of red potatoes and simply stir fried them instead of boiling them. I then threw in some sliced mushrooms, lots of spinach, and some tofu, hit it with a shake of hot sauce, and then topped it with a fried egg (runny, obvs). I split a blood orange between the two of us for a little sweet ending. 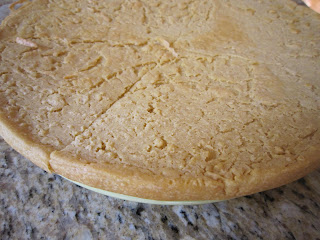 I used a similar recipe as our savory socca but left out the olive oil and added a few shakes of cinnamon and a splash of vanilla extract. I also sweetened up the deal by drizzling on some maple syrup once it was fully cooked, and served it with plain Greek yogurt with sliced almonds and banana. 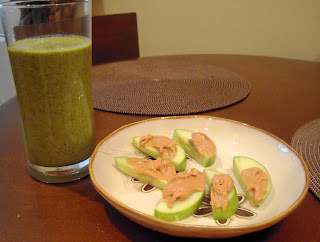 I've been making these for a few months, and keep tweaking my recipe each time. This particular batch (makes enough for 2) contained 1 frozen banana, 2/3 cup frozen mango chunks, 3 Tbsp. hemp protein, 1/2 cup of oats, 1 Tbsp. coconut butter, 2 Tbsp. ground flaxseed, 1 cup almond milk, 1 cup water, a few large handfuls of spinach and some leftover kale stems (no need to throw away your vegetable "trash," trust me, you won't taste them!). Looks weird, tastes delicious. I bulked J's up a bit with another spoonful of protein and handful of oats to refuel her morning workout. I like to eat something solid when consuming a smoothie for breakfast-- usually a piece of toast, but since bread was out, I went with half of an apple with a little peanut butter. Perfect meal, with extreme staying power. 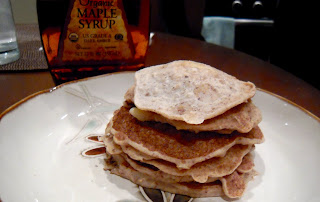 We used an old tried-and-true recipe but used a mix of spelt flour and old fashioned oats (plus baking powder and salt) instead of a pre-made mix. I have a mental issue with my pre-long-run meal, and basically have to eat banana pancakes and a huge mug of coffee in order for it to be a good one. Thankfully, these sufficed, and it was a good one. However, 11+ miles of trail running in the Wissahickon (we're both in training for races, don't worry) requires some mid-run fuel as well. We typically use Gu energy gels, but since they contain a ton of weird stuff, we made our own sugary snack- peanut butter stuffed dates. Simply make a slit in the side of the date, smear a TINY amount of peanut butter inside, and reseal. Carrying these during the run caused most of the peanut butter to slide out, but they were still really good- like a sweet peanut butter sandwich. 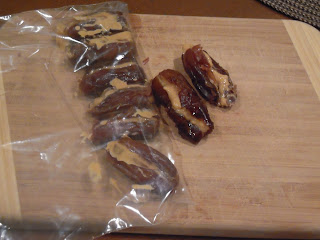 Our dinners (and subsequent lunches) remained full of whole, minimally processed foods, with an emphasis on veggies and whole grains.

Since we didn't want to eat bread, I went on a mission to make my own bread-like item out of a whole grain- steel cut oats. These nutty, chewy grains can be cooked and eaten warm for breakfast, or, in my case, rolled out (post-cooking) onto a cookie sheet and placed in the refrigerator. 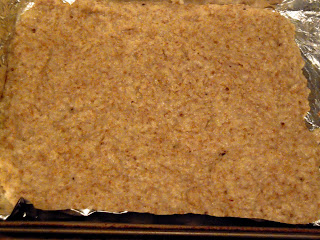 The resulting product is then firm enough to cut into shapes and re-heated in a pan to form a semi-crispy outside and a warm, creamy inside. I made a quick sauce out of lemon juice, tahini, hummus, water and green onions while J massaged some kale to produce one of our favorite raw salad renditions- avocado, cherry tomatoes, red cabbage, shaved carrots and a sprinkle of toasted sunflower and sesame seeds. 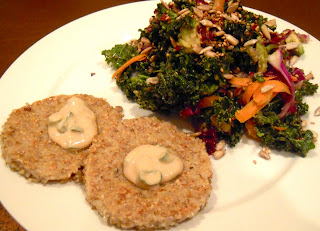 One of our simplest meals, consisting of baked salmon topped with an olive tapenade mixed with garlic-mustard aioli (my favorite sauce/dip/eat-straight-out-of-the-jar condiment... now please forget that I just admitted that to you). 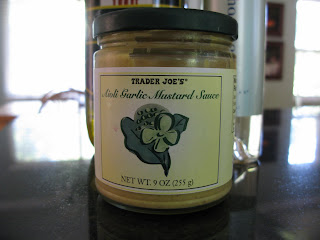 We also baked a thinly sliced sweet potato tossed with olive oil, salt, and pepper, and served it with a mixed vegetable medley (from the freezer). 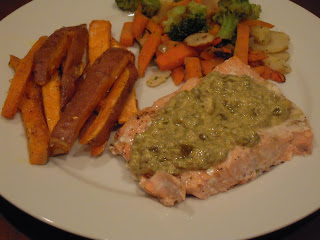 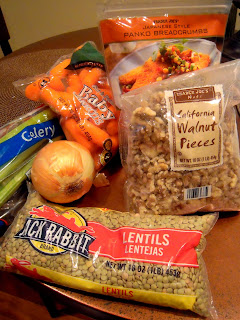 I've made this lentil loaf before, it's quick and easy and won its creator a lifetime worth of lentils and beans-- so really, it has to be good. Cook some lentils (only 20 minutes, no pre-soaking!) while sauteeing an onion, some chopped celery and grated carrot. Combine all of this with some chopped, toasted walnuts, ground flax, and some panko breadcrumbs, press into a loaf pan and top with a balsamic-maple-ketchup sauce. Bake for 20-30 minutes and voila, dinner is served. Even more convenient, halved brussels sprouts take about the same amount of time to roast, so both components were done all at once. 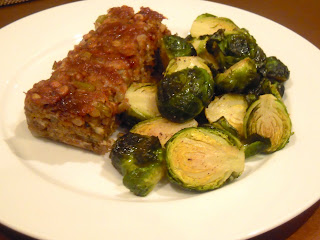 While we're no longer following any particular rules, we are trying to stay on a similar eating path- switching up our breakfast eats, eating as many veggies as possible, making sure we follow recipes/produce dinner for four (guaranteed healthy lunches!), and minimize processed sugar. However, this time, I won't say no to that co-workers birthday cake..
Posted by A and J at 8:19 PM