I've been hearing about the Burger Club for a LONG time, and have always been intrigued.  What could be better than a group of friends who get together once a month-ish and eat burgers?  And then rank them- for official club business, of course.  Even though burgers aren't on the top of my list of favorite foods, I do appreciate a good one.  Even better, the March meeting was the first sponsored event in the history of the Club, with Google Philly footing the bill, giving us the extra impetus we needed to check it out.  I still can't tell you what, exactly, Google Philly is, but I'm perfectly comfortable with their continuing domination of the world.

This month's "meeting" was at Grace Tavern, a Graduate Hospital neighborhood bar and restaurant at the weird intersection of 23rd and South (technically on Gray's Ferry).  We've been thinking about eating here off and on for awhile, so we were glad to finally have an excuse (even though we didn't get a chance to try their famous green bean fries).

The problem with Grace is that it's really not conducive to large groups-- and even though the meeting was on a Wednesday evening AND we were granted the entire back dining room, it was crowded by the time we arrived.  Members arriving after us had no chance at a seat.  However, we made it work, although we both sat at separate tables (better for meeting lots of new people!).  The head of the Club, Steph, was super nice and greeted everyone who came in- including lots of newbies like us, enticed by the word "free."

Grace sells several different burgers, most of which have two toppings.  You can also order your own combination of toppings, although it's not stated so on the menu.  I love mushrooms, so I ordered the "Kennett Square," complete with sauteed mushrooms and melted cheddar cheese.  The waitress asked my temperature preference, and as always, I requested medium-rare-- although 95% of the time I do this, the burger comes cooked medium or worse.

Even though our table was last to be served, we didn't wait long- they have an efficient kitchen.  The burger looks enormous, but the bun to patty ratio is pretty large.  The bun had a shiny, almost plastic-y outer surface, but the innards were fluffy.  Light grill marks alluded to a short toasting session, which I appreciated.


Many Burger Club members commented on two factors: 1) small patty, and on a related note, 2) heavy char.  I think I avoided these problems by ordering my burger lightly cooked-- which they actually did surprisingly well.  The patty was loosely packed, with a definite char flavor but very little crusty edge, at least in this case.  The flavor of the meat was my favorite part, shining through in each bite, and well complemented by the mushrooms and cheese.

J ordered the classic Grace Burger, which comes with the same patty, but topped with Swiss cheese, lettuce, tomato, and onion.  This rendition reminded us of a classic backyard barbecue burger- simple toppings, with a smoky char.  The Swiss could have been left off for all that it added to the flavors, and we definitely could have done with way less onion- even a thin slice of the red variety was a bit too sharp. 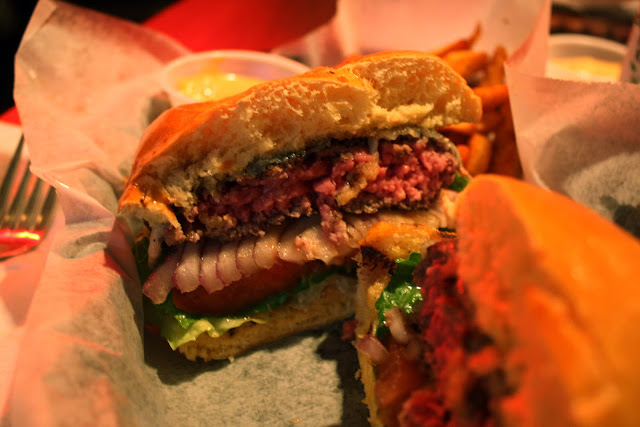 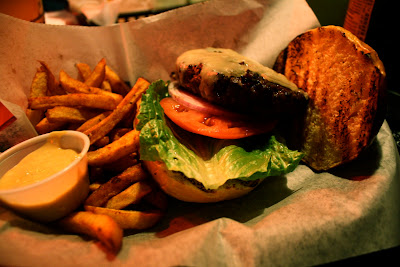 We both also liked the fries-- not a huge portion, thankfully, and well cooked if not a bit stubby (longer fries are better for dipping!).

Although ketchup is an option, each burger is served with a Belgian-style mayo dip (perhaps identical to the one at Monk's?), which is a must.

At the end of the evening, Steph reminded us to log onto the Club site and vote-- categories include the bun, the toppings, the meat, and the atmosphere, as well as an overall score.  FYI, so far in all of the Club's outings, Royal Tavern maintains the top scores.

We're echoing the sentiments of many of the other members when we say the burger was good, but not great.  There was absolutely nothing bad about it, but in a city of greats, it certainly doesn't shine.  However, the fact that we walked out without opening our wallets and gained a few new friends in the process made the whole experience a positive one.  We're already looking forward to the next meeting of the Club-- check the website for more info!