When A & I get together with friends for dinner, we usually put a decent amount of thought into what restaurant we should patron. Sometimes we like to choose something that we know is good (we recently recommended Garces Trading Co. and Kanella to a couple sitting next to us at a restaurant), but we also are usually on a mission to try something new ourselves. With that being said, we have to make sure that the chosen restaurant will cater to everyone's food tastes while still being interesting blog material and for an affordable price. This past weekend, we decided that the new-ish Argentinian-themed Hoof + Fin fit the bill for a get-together with a good college friend and our boyfriends.

Because my boyfriend was treating me to a Phillies game, we wanted to make reservations for later in the evening lest the game go long. Apparently when A called with a request for 8 PM, the host refused that time, but offered 8:15 instead. This seemed fine by us, though a bit strange when we entered the restaurant to find a majority of empty tables. On 3rd Street just off of South (in the space previously occupied by Gayle, which we never had the chance to check out) the place is small and homey, though very dimly lit. Apparently restaurants do not consider food bloggers when they plan their lighting scheme- I extend my apologies for the craptastic photography in this post.

The meal started out with some "breadsticks" served in a cute glass jar alongside a spicy pepper mayonnaisey sauce. Crunchy, a "different" take on the usual bread basket, and not totally filling which is always problematic for those of us who can never say no to multiple pieces of carby goodness. 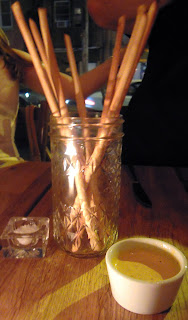 Another good thing about eating with more people (besides the great company!) is the ability to try more of the menu. We decided to each order an appetizer and share them amongst the table. I ordered the grilled sweetbreads ($12), which came with a little "criolla" side salad. After the miniature fried version of sweetbreads that I had at Amis, I thought that this was a fabulous rendition- fat chunks of smooth veal thymus glands (which initiated a one-sided T-cell conversation from my med student bf) with a touch of "fresh off the grill" taste. Although Google does nothing to assist me in the meaning of the word "criolla", the salad was a simple mix of spring greens with a light yet surprisingly sweet dressing. There were enough pieces for everyone to try, and its mild flavor and texture makes it a good dish for less adventurous eaters to check out (just don't think about what it is!) 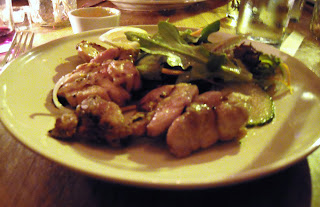 After a conversation about the Louisiana oil spill affecting the seafood harvest and when raw seafood is considered safe (months with an R?), we still opted to order the oysters ($11)- our waitress informed us they were Canadian, which seemed safe enough. Served on the halfshell with an adorable lipped cup of mignonette (vinegar & shallots), the oysters were delicious all on their own or with a touch of lemon and sauce. Their smallish size and tenderness was appreciated- no one likes a giant mouthful of chewy mollusk. Just the right amount of salty without the "I just gulped the ocean" feeling- overall a solid little bite of seafood. 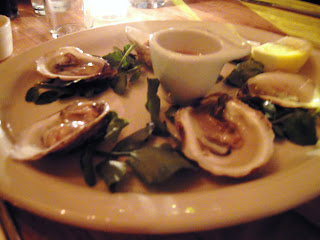 A chose the beef tartare ($9)- a totally unexpected twist on this dish gave it mixed reviews. I personally thought that the additional ingredients mixed with the beef completely stole the spotlight, leaving me with almost no perception of the mild flavor of raw beef that I love. The soft texture was also lost among the onions and peppers and possibly mushrooms- A claimed a "meaty texture" that she enjoyed, but I must have missed out on that. If I had tried it without expecting tartare, I would have been pleased with the overall mix of things, but it just... wasn't tartare. 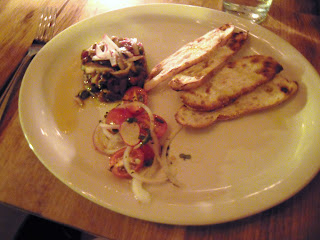 Fried calamari ($10) is always a crowd-pleaser, and the Hoof+Fin version was no exception. Instead of being batter-fried, the octopus was very thinly sliced and then lightly dusted in cornmeal. I couldn't even tell you how it was cooked, because it lacked the deep-fried flavor that I'm used to. It was tossed in a tangy orange-hinted barbecue sauce with a mix of peppers, onions and tomatoes. The vinegar flavor of the sauce mixed with the earthiness of the grilled veggies made for superb additions to the grainy-on-the-outside, smooth-on-the-inside calamari. Also a great appetizer to share due to its hearty portion size. 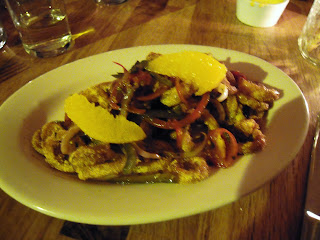 We also tried out the tuna ceviche ($12)- not something I would usually order (as documented in the Spinal Tapas post) due to the overly limey flavor, but this was actually super delicious. Unlike the beef tartare, the tuna was chopped into sizable pieces and mixed with similar-sized small cubes of watermelon. The mixture of the cool, soft, subtly sweet watermelon was absolutely perfect with regards to cutting the acidity of the fish. It would sort of go back and forth in my mouth between smooth and sour fish and grainy sweet fruit- delicious. There was also some chopped onion and radish to give it a little crunch. Definitely the first ceviche I've truly enjoyed! 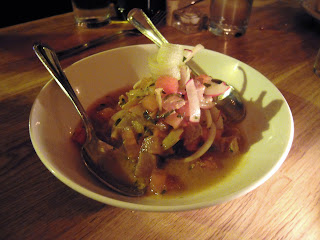 The last app was the grilled asparagus ($6). Not entirely noteable- we make this ourselves at home and it tastes about the same. The bacon viniagrette was kind of watery without a whole lot of flavor, and the poached egg was similarly uninspired. 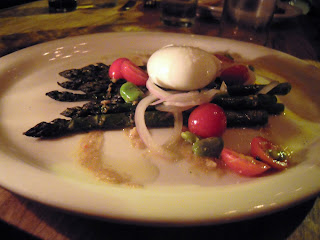 The main course part of the menu gives you two primary options- you can order a true main course dish with multiple components selected by the chef (typically a meat, vegetable and starch combo), or you can mix and match your own meal by ordering a meat "From the Grill" and then choosing the accompaniments that you prefer.

A ordered a dish from the main courses- Pan Roasted Skate Wing with pureed butternut squash and more asparagus ($18). She loved the skate, which makes me a little sad as stingrays are my favorite animal of all time. However, the skate makes for a buttery soft whitefish fillet- this piece was particularly meaty and broke into thick flaky chunks. It was also dusted with a fine cornmeal and topped with a caper sauce that A disliked but "dealt with because (she) really like(s) the fish". She also claimed the butternut squash to be "dessert-like" as it was super sweet with a touch of cinnamon. Light in color, but thickly whipped (gobs of butter I presume?), it was very much enjoyed and seemed a good contrast to the vinegary sauce of the fish. The asparagus was very thin, not in the least bit tough, and generally just a good veggie side. 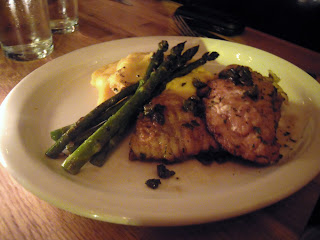 I opted to build my own meal, starting with the 8 oz mahi mahi and adding the crushed yams and grilled vegetables ($18). The mahi was cooked beautifully, and was perfect in its simple flavor and delicate texture. The grilled peppers, onions and cherry tomatoes were also simply delicious- the heat of the grill really brought out the sweetness of each veggie. In contrast, the crushed yams were a complex starchy side that I'm still trying to decipher. Don't get me wrong- I loved every bit of it. It was essentially a creamy smooth pile of sweet potato with a thin "skin" of broiled crispiness and topped with a cool sour yet sweet cream sauce... every layer was starkly different in taste and texture and made for a very interesting side dish- exactly what I was hoping for from this kitchen. 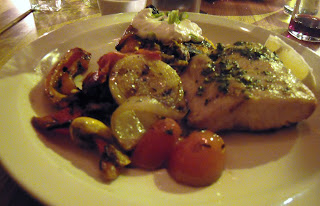 Our dining mates tried a variety of other dishes from the menu, including a "mixed grill" special and a seafood rice dish reminiscent of paella. Everyone seemed pleased with the entrees- as Argentinians are famous for the quantity and variety of meats that they prepare and consume, we were certainly exposed to a large array of them.

The amount of food that we ate left us open to hearing about the dessert options. There were three selections that evening, yet we all decided on the dulce de leche crepes. Two thin crepes with a simple filling of caramel and strawberries, topped with a whipped cream and a dusting of powdered sugar. Perfectly matched by my decaf latte, the dessert was a sweet and light ending to a delicious and hearty meal. 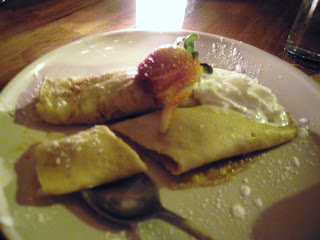 With the courtyard in the back, the restaurant seems to have plenty of space while still keeping its intimate feel, yet we did notice that a group of six was turned away, even with many empty four-tops that could easily be pushed together. Perhaps this was because of a shortage of servers/cooks?? Our service was great- everything seemed well-timed and I felt well attended to without our waitress being at all overbearing. I would love to go back soon, though with our "list" growing ever longer, it seems sadly unlikely. This was just another example of the thriving restaurant scene on South Street.